For the second year in a row, Andreas Raelert fought hard to win the Ironman world championship but came up just short. He significantly improved his cycling this year and came into T2 with some of the strongest riders in the sport aboard this Blue Triad SL.Last year, he charged out of transition a little more than a minute behind eventual winner Craig Alexander and caught the fleet-footed Australian within only a few miles. He ran shoulder-to-shoulder with Crowie for many miles but eventually paid for his 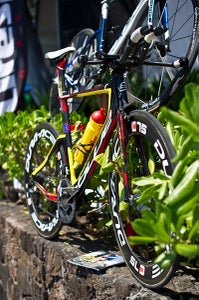 blistering early pace and fell back in the energy lab. He hung on to finish 3rd in his Kona debut and announced himself as one of the favorites for this year’s race.

This year, he again left transition a little more than a minute behind the eventual winner, but he had clearly learned from last years race and paced himself sensibly for the first few miles of the run. Raelert drove hard through the marathon and eventually caught Chris McCormack just after leaving the Energy Lab. Macca proved to be too strong and eventually dropped Raelert only a mile from the finish. The German finished second.

Andreas Raelert hasn’t yet won an Ironman world championship, but he is knocking on the door. His biggest improvement from 2009 to 2010 was on the bike. He rode with the first group out on the course—containing the likes of Macca and Marino Vanhoenacker—and came into T2 many minutes ahead of his adversary from last year, Craig Alexander. He did so aboard this Blue Triad SL that was displayed on Ali’i Drive after the race.

Photos and words by Aaron Hersh