PressCamp is an annual spring gathering that brings together a cultivated collection of bike, tri industry brands and select media outlets. In a stark contrast to the hustle of Interbike, manufacturers have dedicated time with editors to present new product.

This year’s edition was again in Park City, Utah, under sunny skies, warm temps and dusty singletrack. There were some themes that will start to become more ubiquitous for road and tri (the debut of Campagnolo’s H11 hydraulic road disc brakes). But there were a few items that were worth calling out. Check out our five favorite picks from PressCamp.

The 3T Strada aero road bike was the talk of the camp. With 3T’s Gerard Vroomen (one of the design engineers behind the rise of Cervelo) at the helm, expectations were high.

True to form, the Strada is not just an aero road frame, but the first dedicated to a 1X groupset and aerodynamically designed with now-popular 25mm and 28mm tires in mind.

On first glance, it has Vroomen’s fingerprints all over it. The curved seat tube looks much like the one he designed years back for Cervelo. From there, it diverges with a downtube that flares out dramatically, as it reaches the bottle boss section, aerodynamically optimizing air flow off the frame and onto the bottle.

The rest of the bike is an exercise in minimalism: Wispy chainstays, a beautifully-waisted steerer and a fork with an offset driveside leg meant to optimize the direct-mount brake caliper.

Optimization is the name of the game here—this bike is 1X, disc brake-only. There’s not even a front derailleur bracket to provide the customer an option to install a 2X setup. General Manager of 3T Americas Dave Koesel said that doing so would only defeat the purpose of the bike as they see it; allowing for a rim brake and 2X would require added reinforcement (read: weight) in the frame, as would the removal of the hyper-stiff thru-axle—forcing 3T to build up the chainstays. Improvement through simplicity. 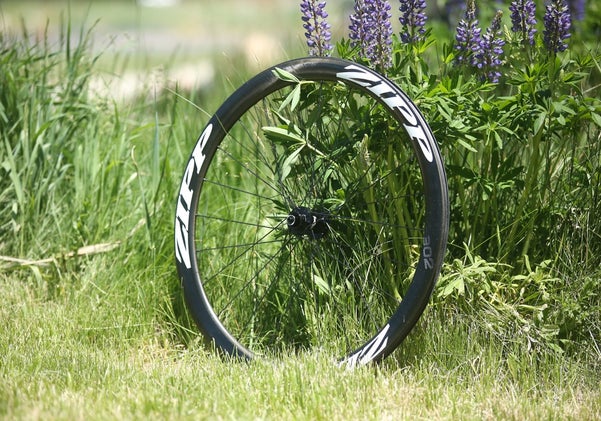 Everyone went bananas when Zipp debuted the NSW 454 carbon clincher in May. It was designed by Zipp’s “Nest Speed Works” team in Indianapolis, Ind., with a wave design inspired by biomimicry, specifically the ridges found in a whale’s rippled skin, which helps it move more efficiently through the water. The 454 NSW employed the technology, alongside an ingenious magnetic clutch freehub. As stated, folks went bananas—largely because the price was $4,000 per pair.

Next comes the 302. The little cousin of the low- to mid-depth 303 wheelset, Zipp decided to offer a mid-depth (45mm) aero wheel, made at home in Indianapolis, with all the same safety, testing and warranty elements… at $1,500 a pair.

The wheel looks like Zipp’s existing 303 and shares the same braking surface and resin technologies of the Firestrike product, but absent are Zipp’s signature dimples. The 302 runs a different, less expensive hubset, and the 302 rim’s aero cross section is a bit less blunted than the 303 at the apex. Zipp claims that in average riding conditions, the 302 is just two to four watts aerodynamically slower than the 303.

How’d Zipp get the price down? By using more common (and less pricey) pieces like j-bend spokes—that are easily sourced and replaced—and using a mold to remove some of the legwork. Zipp also uses traditional adhesive decals, rather than the new Impress decal printing.

“The 302 benefits from so many technology elements we put into our Firestrike and NSW wheels,” said Zipp’s Declan Doyle. “The market is crowded with options in this price range, but there are a lot that, really, you don’t know where they come from, what their testing and engineering consist of. These 302s are no different than our NSW wheels in many ways; they still have the same heat management technology and same testing as Firecrest.”

Zipp will offer a rim brake and disc brake version, with a hub that users can change to a thru-axle at any time. 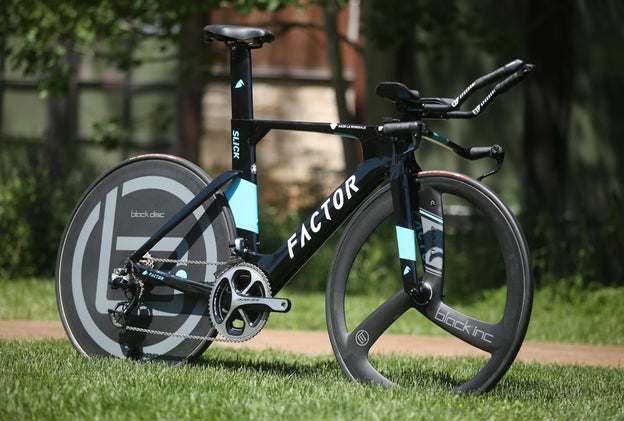 The company co-founded by industry veteran Rob Gitelis and former ProTour rider Baden Cooke of Australia has made a quiet debut in America with its clean, organic bike. After a ProTour debut a year ago with the AG2T Mondiale cycling team, as well as sponsoring pro ITU triathletes, Australian Jacob Birtwhistle and American Katie Zaferes, Factor presented its products to the American media for the first time in Park City.

While the company’s aero road bike, named The One, was alluring—with an integrated aero road bar/stem setup—the most relevant piece for triathletes is the company’s time trial bike, the Slick. The Slick features a wildly unique twin vane downtube—effectively two downtube halves that run parallel to one another as they run from the headtube to the bottom bracket.

As factor builds out its distribution plan, expect to see their products at a few select retailers. 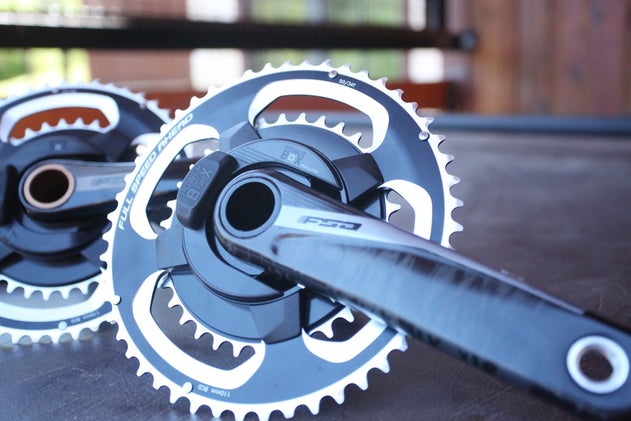 FSA is finally here with power. In fact, FSA partnered with Power 2 Max to create the PowerBank powermeters that debuted a month ago. Each will communicate with your computer via ANT+ connection and will be set on FSA’s signature BB386 EVO bottom bracket standard. It will be available in two versions: a carbon PowerBank ($1,190) and an alloy crankarm version ($650).

Both units use a single-leg relay, which double to create your power number. FSA also spoke of an optional-buy firmware update in September that will convert the PowerBank from a single-leg to a dual-leg powermeter.For user convenience, the PowerBank units will feature a user-replaceable, drugstore-available CR2450 coin battery that inserts into a rubber-covered slot on the spider.

Availability? They’re in stock now, so check your local shop.

FSA’s Wireless Electronic group was also on display and demo. As a complete group (road shifters, front and rear derailleurs, battery, brakes, carbon crankset, chain and cassette) expect to spend $2,673 versus the SRAMs, Shimanos and Campys of the world. One could even swap it out with a PowerBank crankset and have a complete, stem-to-stern FSA road groupset with powermeter.

Are tri/TT bar-end shifters and brake levers on the way? FSA staff said it’s in the pipeline “soon,” perhaps around Kona. Needless to say, we’ll be looking over Terenzo Bozzone’s Argon 18 at Challenge Roth in a few weeks; FSA said he will be running the new FSA powermeter crankset. (We’ll keep our eyes peeled to see if he’s running any prototype gear.) 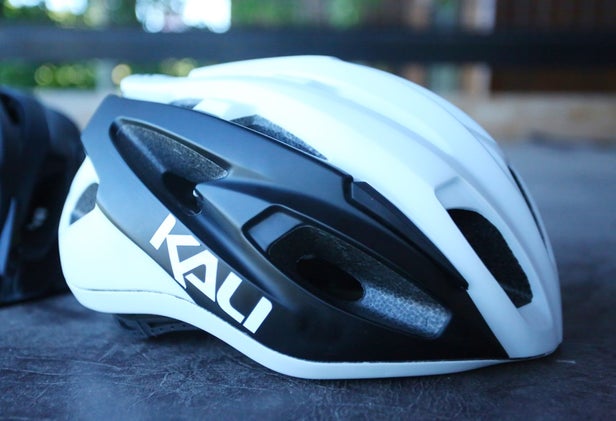 But rider safety is still paramount; it’s the reason we wear helmets. To that end, progressive helmet impact testing is getting more play as a marketable feature over style and vents. A year ago, Koroyd showed up at PressCamp, not to show off any product, but rather its helmet safety and testing technology.

This year, Morgan Hill, Calif.-based Kali Protectives takes on the big brands like Giro and Specialized with helmets that look great but have a big safety story. Company founder Brad Waldron wanted its safety testing to be centerpiece.

Kali partnered with the Imperial College of London to test impact effect and found the same thing that Koroyd and MIPS did, shear, non-direct impact has as devastating an effect on the brain as a direct hit. While expanded polystyrene (EPS) is good for direct impact, it offers nothing in the way of softening the blow to the brain to prevent rotational concussions. Kali then tested at Dynamic Research in Torrance, Calif. to study the effects themselves.

Kali wanted EPS to protect against the hit, but also something softer next to the head. It started a few years ago with a technology called LDL, a vinyl nitrile memory foam that was used to complement the EPS.

“Initially, it was a comfort feature, because it has a natural cushioning give,” Waldron said. Now, Kali features a material from a company called ArmourGel, which creates rubberized tabs that are located throughout the helmet. In the event of a non-direct, at-speed impact, the small circular nodules flex and bend, allowing the skull to rotate with less violent effect. The nodules lessen the effect of a hit when compared to a helmet without the product. Kali’s oblique impact testing with its Shiv downhill helmet showed a reduced chance of brain injury down from 60 percent to 10 percent.

The technology is top shelf, living in Kali’s $500 DOT-certified motorcycle helmets, in its $250 aero road helmet, the Tava, Tava and now in their newly-debuted entry level road helmet, the Therapy. (Kali has a mountain bike version called the Alchemy—same helmet, but with a visor) At $100, it’s a nice piece of mind, at a fair cost. “We don’t want this just for those that can spend on it,” Waldron said. “Our plan is that by 2019, all of our helmets, down to our $35 kids helmets, will feature it.” The Therapy will debut on store shelves this fall.