Click here to view a photo gallery of the BMC TM01. 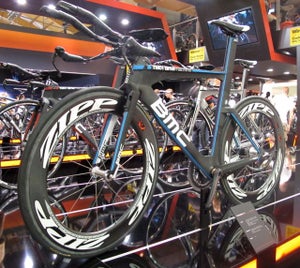 Click here to view a photo gallery of the BMC TM01.

The all-new BMC TM01 that was ridden to an iron-distance world record and Tour de France win this past summer will be available to mortal athletes in January. Although it is best known as Cadel Evans’ time trial bike, the TM01 is clearly a triathlon bike and not simply a TT bike relabeled for sale to triathletes. In fact, BMC actually had to make a custom aerobar attachment system to accommodate Cadel’s radically low aerobar position because the frame itself is designed for the taller positions typically ridden by triathletes. In addition to the triathlon-friendly and highly adjustable geometry, which BMC has labeled P2P (power to perform), the TM01 has a long list of features designed to minimize the aerodynamic drag created by the frame.

The TM01 is built in four frame sizes, three of which have stack and reach values similar to the Cervelo P2 and would be considered to have a “moderately aggressive” geometry. The fourth frame size, however, is a match for an entirely different riding style.

The three primary sizes—S, M-L and L—have stack and reach values that fall between the Trek Speed Concept and the Cervelo P4, almost on top of the Cervelo P2. BMC Road Product Manager Andrew James says the TM01 was designed as a triathlon bike, not a time trial bike, and this geometry scheme supports that assertion. The fourth frame—size M-S—has the same reach value as the M-L, but a substantially taller stack value. This specific frame is one of the most geometrically conservative—read: upright riding position—triathlon bikes sold today. The M-S size is even more unusual it builds conservative geometry into BMC’s flagship tri bike. Almost all other top-end tri bikes are designed with long reach values and short stack values to accommodate very aggressive positions. This bike is uniquely suited to the athlete that wants a pro-level frame but simply can’t fit a pro-style position. Since BMC is only producing a single frame size for this riding style, however, only athletes that fit this one model get to make that decision.

The seat post has a true 77-degree angle, but the saddle clamp can be moved forward 21 millimeters. James says Andreas Raelert rides with an 82-degree effective seat tube angle. By using a standard aerobar instead of an integrated unit, the TM01 is able to morph its geometry by selecting a bar that complements the rider’s fit preferences rather than being constrained by the dimensions of a proprietary bar.

The aerobar attachment system uses three modular pieces to create the stem. The first piece is an angled wedge that bolts straight to the extension of the fork in front of the headtube. The wedge can be positioned downward or upward. The second piece is a rectangular extender that comes in two widths, one wide and one narrow. One, none or both pieces can be installed to lengthen or lift the aerobar position. The final component is the 31.8mm aerobar clamp. The clamp is offset to one side of the clamp and can be flipped to lift or lower the aerobar position. The clamp segment itself extends to either side beyond the stem system. Combined with the adjustable seatpost clamp, BMC calls this adjustable aerobar system P2P, or Position to Perform, concept. The result is a wide range of adjustment that should help the TM01 fit many different riders. We do not yet have specific dimensions that can be translated into standard stem and spacer dimensions, but Andrew James says the reach value can be set extremely short, an undoubtedly great option for many people. These pieces blend together to create a smoothly integrated stem system that leads into a cap above the toptube that guides the cables and housing (or Di2 wires) into the frame. The standard 31.8mm-wide aerobar clamp allows the TM01 to use any aftermarket aerobar to adjust the fit. This range of fit adjustability proves the BMC TM01 is truly dedicated to triathlon and it should allow many riders to fit the TM01.

The front stopper is a V-brake that bolts directly onto bosses mounted to the fork, and is shielded by covers that bolt onto the fork over the arms. The pads can be set up to fit the super-wide aero wheels by moving spacer washers to the outside of the brake arm, and these washers can be moved inside the arms to space the brake shoes to fit wheels with a traditional 19mm-wide brake track. The cover pieces have slots over the bolts mounting the brake shoes to the arms that allow the pads to be adjusted in all directions like a standard road caliper while mounted to the bike. The housing passes through the headtube and into the brake cavity. The upper shield piece has to be removed (which requires a wrench) to adjust cable tension. There is no barrel adjuster for on-the-fly adjustments. The brake arms are held in front of the fork legs by bosses when open. This prevents the brake from poking out to the side of the blades.

The rear stopper is also a V-brake and is tucked into the chainstays behind the bottom bracket. The rear brake cable and housing pass into the top tube and through the frame before joining the brake.

The TM01’s tubes have a unique truncated airfoil profile with an indentation just in front of the widest portion of the tubes. BMC says these indentations act as a tripwire to allow air to stay attached to the tubes longer before separating completely and generating more aero drag. This tripwire concept is gaining popularity in the cycling industry. Zipp’s dimples are famous, Ridley has textured strips on the headtube and downtube of their top-level tri and aero-road bikes and Reynolds has a thin raised bar on the side of their aero rims, all intended to improve airflow. This concept is based on decades-old aerodynamic research that demonstrated airflow sticks to a sphere longer and generates less drag if the sphere has a thin wire wrapping around it perpendicular to the direction of airflow. The TM01 uses this tripwire tube shape concept on all the tubes that are oriented near to vertical—the fork, headtube, downtube, seatpost, seatube and seat stays.

The tubes all conform to the UCI’s 3:1 ratio, meaning the tubes are no more than three-times deeper than they are wide. The bike has a very narrow frontal profile and the fork extension in front of the frame blends smoothly with the headtube. BMC added clever rubber stoppers on the headtube to prevent the fork extension piece from damaging the frame finish when it’s turned all the way to the side. Seatstays join the seat tube slightly more than halfway up the tube. There is a small extension behind the fork crown to close the gap between the fork and the downtube. The downtube itself has a front wheel cutout as well. The Di2 battery is concealed in a cavity at the base of the rear wheel cutout, and the same frame can be built either with Di2 or with a cabled drivetrain routed with full-length housing from the shifters to derailleurs. The rear dropouts are horizontal and have a barrel adjuster to quickly change rear wheel position. The frame has a BB30 bottom bracket. The seatpost clamp bolt is totally concealed in the top tube and the opening is plugged with a rubber piece.

January of 2012, the TM01 and TM02 are expected to go on sale in the United States. The TM01 will be available as a frameset, with a Shimano Ultegra build, SRAM Red build, or with Shimano Dura-Ace Di2 and Zipp 808s.

A Deep Dive Into The New Quintana Roo X-PR