Last Saturday, I did two things I’m not proud of: I pedaled my bike on a stationary trainer, and I did so while watching other people do the same thing. The difference was that the four woman on my computer were having a virtual race on so-called “smart” trainers—and were getting paid for their effort. I was melting a tire on a 14-year-old fluid trainer and receiving no compensation.

A couple of weeks ago, Ironman launched its own virtual club and virtual race platform. So far most of the mass-participation virtual races have involved simple GPS or trainer files uploaded to an online leaderboard. To date, there is little check on the accuracy of those files.

But Ironman chose Rouvy as its official virtual cycling partner for a reason. Right now, Rouvy is primarily being used for the Ironman pro races that have rolled out on the weekends pitting four women against each other on one day and four men the next. Age-groupers have the option to “ride” with the pros on the virtual courses as long as they have a cadence sensor, a smart phone, and a basic trainer. The ease is the appeal. (And more virtual race options via Rouvy are likely to be rolled out soon.) Age-groupers have so far had run-bike-run duathlons, while the pros compete over only the bike portion in order to make live coverage possible on the Ironman Now Facebook page.

As sophisticated as Rouvy’s technology is, though, the variance in virtual speed is massive when you have riders using so many different trainers and metrics. And when it comes to uploading GPS or smart trainer files, you can easily see even larger variances among the thousands of people who have participated so far. It seems unlikely so many age-groupers are suddenly putting down times faster than some of the top professionals. The challenge is that some athletes are using power, some are using rear-wheel speed, and some are using cadence. Plus, most virtual training systems, like Rouvy or Zwift or TrainerRoad, rely on an algorithm to determine speed as it relates to power. So you also have to trust thousands of triathletes to be honest about their weight, in order to get an accurate resistance reading. (There are smart scales and ways to calibrate smart trainers for high-level virtual competition used by national governing bodies and pro cycling teams, but those not as readily available on the mass participation level.)

The professional Ironman VR races are able to be a bit more accurate than the age-group version because everyone has a comparable smart trainer. Ironman has also removed most of the incentive to weight dope by paying a $2,000 appearance fee to the invited pros instead of a tiered prize purse. It’s not a lot, but it’s also not bad for an hour or two of exercise. The real racing comes in the form of various “prime” incentives along the route. The primes are worth $250 and include everything from fastest up a climb to a watts-per-kilogram contest to even a popularity contest.

“As Ironman is sorting out all the technology, I think it would be great if the audience could hear conversation and banter between the pro athletes,” said Chelsea Sodaro, who finished second to Lauren Brandon in the Ironman VR2 race last Saturday and collected the watts-per-kilogram prime (topping out at an impressive 14.9 w/kg). “Overall I was surprised at how much I enjoyed it. I have been a little bummed out the past week as I wrap my head around what’s going on in the world right now. I found the competition to be really energizing and a great way to connect with the community.”

Pros had a similar response to the Zwift Pro Tri Race Series that launched this past week and will run every Wednesday. Accurately calibrated? Not totally. Hard and fun? Yes. While there’s no payout, the Zwift races are open to all the pro triathletes on the platform (instead of being invite-only). Plus, you can watch as a spectator on YouTube and compare your watts-per-kilogram to Flora Duffy’s or Lucy Charles’. You can even see some of the pros’ files in our Triathlete Strava Club. 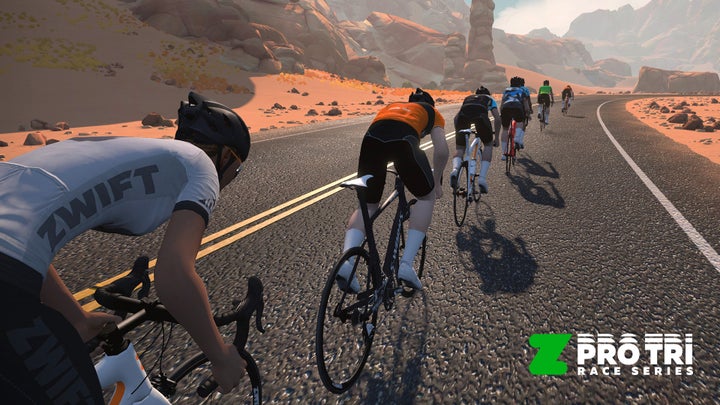 SuperLeague has also partnered with Zwift
to have their athletes compete in the Zwift Classics races, which you can also watch live.

If live coverage of a virtual bike race doesn’t sound exciting, it’s because it’s not. But it’s still a chance for pros to show value to sponsors and connect with fans, even if the live viewer numbers are low. The average viewership for Saturday’s Ironman Now broadcast was only 1,000 viewers.

Yet, the coverage went beyond the live viewers. After Tim O’Donnell accidentally unplugged the internet on Mirinda Carfrae during the first Ironman VR race, it was picked up by the Guardian under the headline, “‘What an idiot!’ Triathlete out of virtual race after husband trips over power cord” and got a shout-out on Jimmy Fallon. All of a sudden that’s a few hundred thousand impressions for Felt bikes, TYR, and Chocolate Milk, and Carfrae showed tremendous value to her sponsors during a time when that’s very hard to do. 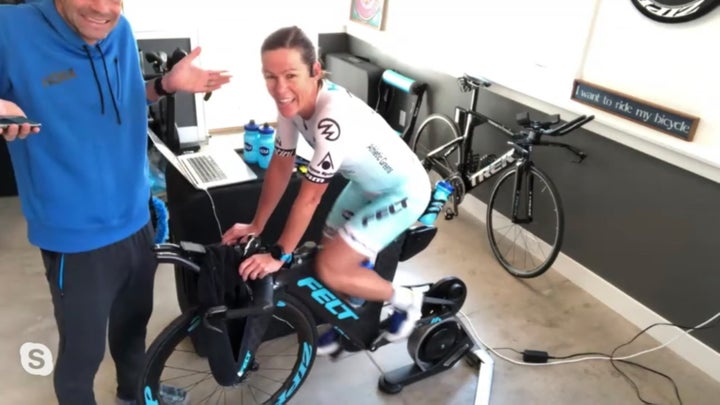 Ironman stands to lose many millions of dollars this year, and the effects could be long-lasting for the most global race producer on the globe. The best the company can hope for is that all this time away from racing makes their consumer more eager than ever to race. You know, absence makes the heart grow fonder and all that.

“There’s a level of excitement to it, and the community aspect adds to it,” said Glenn Pawlowski, a 44-year-old triathlete who competed in both of the Ironman VR races so far and will compete in Ironman VR3 this coming weekend. “I got a text from a friend last Sunday, after I had completed the half-iron race on Saturday. She was halfway through her 90K ride and was dying but she was also crushing it. I was able to cheer her on virtually for the last 20K, and she ended up second in her age group.”

During a time that the community can’t physically get together, it can still lift each other up, and that’s pretty cool—even if there are some kinks to work out before they start handing out 70.3 Worlds slots virtually.

If you’re looking to get a little competition, check out our round-up of virtual race options.