The World Triathlon Corporation (WTC) has released the final rules for how professionals will qualify for the 2011 Ironman World Championship and how prize money will be distributed. Earlier in the year the organization had established new rules for the way prize money is distributed, referred to by many as the 8% rule. After much debate about the fairness of these rules, the WTC emailed the professionals a set of proposed changes that would not only change the prize purse distribution policy, but would also completely overhaul the way professionals qualify for the Ironman World Championship.

After a few weeks of receiving feedback from the sport’s professionals, the WTC officially released the new rules yesterday evening. The biggest change from the original proposal it that athletes will be qualified in two sets, July Qualifiers and August Qualifiers, so that those with enough points can start preparing for travel arrangements to Kona and training plans early enough in the season.

Check back to Competitor.com as we continue to follow this developing story.

See the complete set of rules below:

With Comments for pro athletes

The following rules and policies are final and will be applied during the 2011 qualifying season beginning with races after September 1, 2010. WTC thanks those who submitted their personal input. This has been a challenging process with many considerations (such as existing venue and sponsorship contracts) playing a role that may not be apparent to those outside our offices. The comments and ideas received were for the most part constructive and supportive.

We believe that these rule and policy changes are equitable and will provide a platform for the pro aspect of Ironman racing to grow and develop. We also recognize that some fine-tuning may be required after a full year’s experience with these rules and policies. We continue to welcome the further comments of our pro members and expect to announce any modifications about this time next year.

Please note that in response to the weight of comments received, several changes were made to the draft that was circulated to our pro membership. Note also the comments below explaining why changes were/were not made to certain rules and policies.

“Races” means Ironman branded full-distance and 70.3 events worldwide that are authorized by the World Triathlon Corporation.

All dates and times stated refer to Eastern USA time and date.

Effective September 1, 2010, the single-performance slot based system for pro athletes will be discontinued. Beginning with Races after August 31, 2010, pro athletes will earn points for Kona Qualifying correlating to their finish position. The top 50 male and top 30 female pros* in the KPR at the end of each Qualifying Year will qualify to race in Kona.

* The proportion of male to female pros may be adjusted in future years to reflect the then current percentage of male and female WTC pro members that are racing in BOTH Ironman and Ironman 70.3 events

Comment: The above note now clarifies our original intention that the number of pro members racing full-distance Ironman races will determine the split of slots between males and females.


KPR will be determined as follows:

Comment: This new section specifies our intention and commitment to post updated rankings on-line. All relevant information will be hosted on a new independent web site to be launched in August – www.ironmanpromembership.com

The highest scoring 40 male and 25 female pros in the KPR as of July 31st will be qualified to race in Kona. These athletes (“July Qualifiers”) are assured of a slot in Kona provided they enter the event according to registration procedures.

Example – As of July 31st, six male athletes are tied for 36th position on the KPR. The final five July Qualifier slots will be determined by Tiebreakers.

Example – Athlete A has 2000 points as of July 31st and is ranked 40th on the KPR. Athlete A has qualified for Kona. In the final KPR standings (published after August 31st) 11 male athletes accumulate more than 2000 points and are ranked ahead of Athlete A. Ten of those 11 athletes as determined by the Tiebreakers will qualify for Kona.

Comment: The change to July Qualifiers and August Qualifiers is made in response to the most frequent comment that August 31st was too late for athletes to know if they have qualified for Kona. While our simulations indicated that the vast majority of qualified pros would have been assured of their qualifying slots well before August 31st, this change will provide an early resolution of most qualifying slots for pros by July 31st. Note that under the old qualifying system as many as 20 pro slots were awarded at August races.

We also liked the suggestion of automatic qualification for athletes meeting a point threshold at any time during the season. Since at least one year’s experience with the system is required to set the threshold, this suggestion will be revisited for the 2012 Qualifying Year.

In keeping with the tradition started by Valerie Silk, past champions will continue to have a lifetime invitation to race in their appropriate age group category. Past champions making this election will not be required to qualify or validate their entry. Past champions must abide by all WTC, national and international federations rules regarding professional and age group status and switching between these categories.

Automatic Qualifiers will be accepted into Kona in addition to the 80 pro slots. If, for example, a returning champion is ranked in the top 30 women, the 31st ranked woman will qualify for Kona.

Ties will be broken as follows:

In the event that two or more athletes remain tied after the 4th tiebreaker, all tied athletes will qualify.

The final KPR will be published as soon as possible after the last Race of the Qualifying Year (end of August) but not later than September 3rd. Qualified athletes will have until September 7th to complete on-line registration for Kona. A roll-down will be held for any unclaimed slots with entries rolling down to the next highest ranked athlete. Details of the roll-down procedure will be made available at a later date.

WTC retains the right to award “Wild Card” pro entries into Kona. While Wild Card entries may be awarded at the sole discretion of WTC, these entries, if used, are intended to “fix” any holes in the new qualifying system. Wild Card entries are not intended to provide any athletes relief due to injury, illness or other external factor.

Comment: This was the most misunderstood of the policy provisions. Wild cards are a failsafe system in case of a systemic failure and for this reason will remain undefined. Wild Card entries will not be used to recover or add any specific athlete (including Alexander, Wellington and Armstrong) if they fail to qualify. We expect to drop Wild Cards once we are assured that the system works. Many athletes were concerned that this provision would be used to qualify Lance Armstrong or other similar athlete into the pro division.

Another point that seems to be generally misunderstood is that WTC does not determine eligibility to race as a pro athlete. Professional/elite standards are set by the national federations. Just as a top triathlete cannot just show up and race in one of cycling’s Grand Tours, no athlete can be “waived” into an Ironman pro field without first meeting their home country’s pro or elite standards. As standards vary widely from country to country, WTC, through the KPR, is left to cull out those pros qualified to race in a world championship.

All Ironman races will comply with these prize money standards. This does not include World Championship events, which have separate prize standards.

Includes Asia Pacific 70.3, US 70.3 and European 70.3 championships; regional Ironman championships to be announced

Comment: Paying through 6th place (rather than 5th) at the $25,000 races is responsive to many responses requesting deeper prize money.

Pro membership will include entry fee waiver for qualified athletes into Kona.

A one-race Pro Memberships will be offered for the following fees:
US$200 for a 70.3 race
US$400 for a full-distance Ironman race

Any athlete wishing to apply for a one-race membership or a first-time annual membership must do so at least 60-days prior to the stated event in which they are planning to compete. There will be no exceptions to this 60-day period. 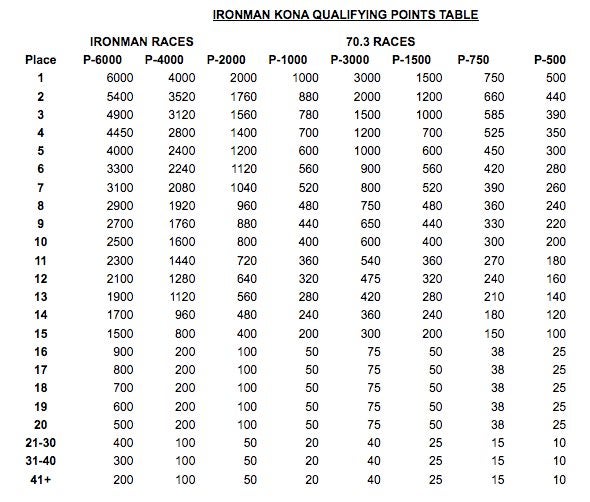 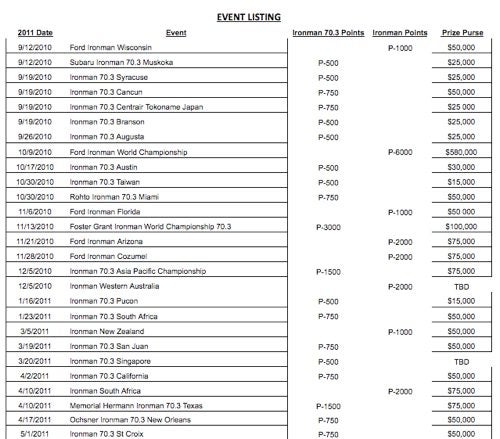 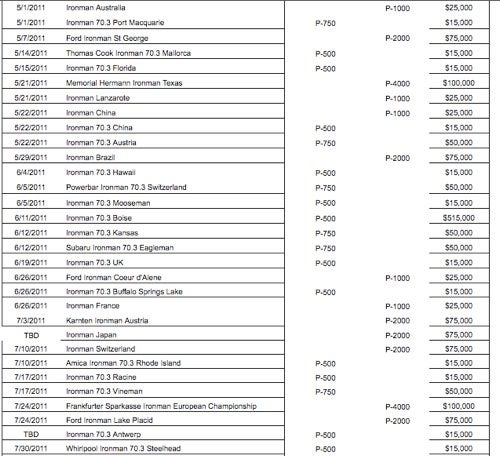 Comment: Please note that the prize money and points allocation of events are mutually exclusive. Whilst our ultimate goal is to have them standardized – due to various of operational, considerations, the allocations have been assigned accordingly. Additionally as new events are announced and details finalized this listing will be updated through direct communication with the Membership and on the new website. 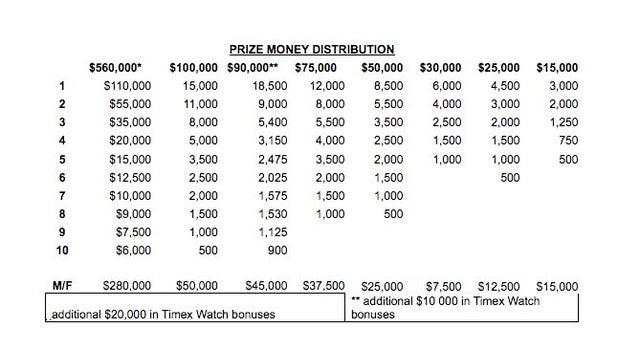