A combination of factors come into play to make the Challenge Roth triathlon the race where iron-distance records are broken. In the most recent edition on July 10, both Andreas Raelert and Chrissie Wellington established new world records. Here’s a unique look into why this venue makes for blazing times.

The swim in Donau Canal is a single counterclockwise loop. The bike course on its face is not anything earth shattering; it doesn’t have the legendary Mumuku winds of Kona and it lacks massive climbs like those found at Lanzarote’s Timanfaya Park. It’s two loops, heading south toward the town of Greding before turning north again to Roth.

But it does have its signature character: Solarer Berg.

“Solarer Hill is absolutely crazy,” Challenge Roth race director Felix Walchshofer told Triathlete.com back in 2009. “Athletes will get around the corner and will hear the noise of the crowds. After a right turn, they’ll see 25,000 spectators. I get goose bumps talking about it, but it’s like a wall of people, and they pass out of way just as the riders come up. It’s our own Tour de France climb.”

The run is a flat effort with two out-and-back sections on the south and north end. Walchshofer explained the finish is not to be missed. “The last finisher experiences the sparklers, huge fireworks,” he said. “For me, the last finisher is an even more special moment than the first finisher.”

But what makes Roth the ideal location for blazing iron-distance times?

Swimming in a canal without the need to sight to track your path helps. With the shoreline or midline course markers as a guide, there is minimal need to sight. “For me, this is the most fascinating part of the race. Twenty thousand people come up along the canal creating a great festival atmosphere as the sun is rising. It’s absolutely magic,” Walchshofer said. 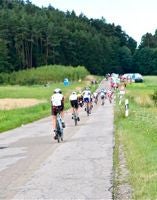 The two-loop bike course is mostly flat with several rolling sections and just a few short stabs including the Solarerberg, or Solar, Hill. Elevation goes no lower than 350 meters above sea level, and no higher than 550 meters above sea level. “People when they see the times of Jurgen Zack and Thomas Hellriegel, they think it was tailwind all the way around, but it’s just a fast, fast course,” said Walschshofer.

Walchshofer believed when it’s straight, it’s easy. “It’s not a technical course by any means,” he said. “It’s open and a rather easy course.”

Andreas Raelert turned in an amazing 4:11:43 bike split towards his world record effort. He’s not the only one to post a fast bike split on this course. In 1999, Jurgen Zack tore to a 4:14:16 record bike time. Two years before that Thomas Hellriegel turned in a 4:14:45.

There’s nothing like the quiet buzz of wheels on fresh pavement, free of seam cracks, chip seal or potholes. It’s a racer’s dream. “This makes it fast,” Csomor said. “ You can just focus on your pace and your effort.”

The run, with a far north and south turnaround, is mostly flat. “We have one hill in it, but it’s not a major one,” Walchshofer said. Long stretches along the Donau Canal can be a blessing—or a boon. “It may be tough for some for the head, but it’s really good seeing the runners coming by again,” he says.

Csomor brought out one of the biggest factors: a marathon that’s easy on the knees is one absent cement or hard pavement. “I think 70 percent of the run is on this,” she said as she shuffled some gravel underfoot. “It’s not like Frankfurt, where you have cobbles, you are always adjusting your run stride, your balance.”

The kind surfaces helped Raelert run a 2:40:52 marathon this year. Wellington was only four minutes slower at 2:44:35, giving her the women’s marathon course record.

While Roth has been known to see rainy conditions, the area’s weather is usually cool and calm. According to Weather.com, Roth sees an average high of 74 degrees F and an average low of 54 degrees F in the month of July; ideal conditions for racing.

And even when the conditions are hotter or rainier than normal, athletes still tend to see personal records on race day.

Photos from 20 Years of Challenge Roth