Every February on Chile’s Easter Island, the indigenous Rapa Nui people hold a spectacular race inside a volcano.

It’s midday, and a tribe of body-marked triathletes in loincloths are afloat inside a volcano. A turquoise lake fills the majority of Easter Island’s dormant Rano Raraku crater, and as the surf crashes on the desert isle’s shores, this hidden lake is calm. Perched above the crater are stone statues called the moai. 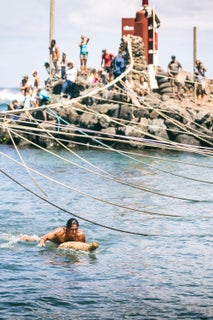 Found throughout the island and measuring up to 30 feet tall, these imposing figures were carved in the image of ancient islanders. Almost a millennium later they still stand, looking down into the cauldron. The indigenous Rapa Nui athletes wait on their reed canoes below for the Tau’a Triathlon to begin.

The race is a highlight of Easter Island’s most important annual event called “Tapati,” a two-week cultural celebration held since 1989 at the start of February. It’s where the islanders demonstrate their abilities across a range of disciplines including dance, handicraft, cooking and sport, with the Tau’a Triathlon added in 1995 as the main athletic highlight.

The event started because islanders wanted to recreate a historic race known as the Birdman, held on the island until 1866 when foreign incursion, imported disease and in-fighting brought it to an end. Birdman often proved deadly for competitors as they scrambled down the island’s cliffs, swam through shark-infested waters and climbed the rocks of an outlying island to retrieve the first laid egg of the migratory sooty tern. The first to return—egg intact—would entitle his tribal leader to become king for the forthcoming year.

Today’s race inside the volcano is a spectacular, albeit less dangerous (and political) affair. It takes place at the start of the Tapati fortnight and has been held ever since the race became part of the festivities in the mid-’90s. The triathlon’s three legs don’t follow the swim-bike-run formats most triathletes are used to. Instead, the locals will do a 400-meter reed boat paddle, a 1500-meter barefoot run (including 1,000 meters where competitors carry 44 pounds of bananas), and 400 meters of reed float swimming. The most fiercely contested category is the men’s 22 to 40 age group. They paddle out first, followed by the 40+ age-groupers, then the 17- to 21-year-old boys, then the women—a category added for the first time this year. While there is no published start or finishers list, an estimated 20 people entered in each category this year, competing barefoot and in traditional tribal dress.

A flag drops. The Tau’a Triathlon begins. The athletes charge across the lake, sitting upright in their reed crafts. An Easter Island team has reached the World Outrigger Canoe semifinals before, an event in which there are up to 12 competitors to a boat. But in this race, individuals pull powerfully on a single paddle in their rush to reach T1 in front of the crowds on the far shore. “The majority of the podium is decided on the paddling section,” says competitor Riu Pakarati. “This is the discipline where you can gain the greatest advantage.”

If it seems strange that the race is decided on a leg that takes an average of five minutes to complete, consider this: It all comes down to canoe construction. Preparation for the paddle began more than two months ago, when competitors each gathered about 2,000 bulrush reeds and left them in the sun to dry. (The exact number of reeds needed depends on the build and weight of each competitor.) Then they laced together two large bunches of 400 dried bulrush reeds and tightened them with string. These bunches form the two long sides of the canoe and are linked with two smaller bunches stacked in between, one forming the keel and the other becoming the paddler’s seat.

Construction of the watertight canoes begins anew every year, and while this takes an average of three days, the exact time required depends on how many friends and family help out. Quality control when picking out the reeds—and the construction crew—plays a big role in an athlete’s race fortunes; a badly built boat will leave a competitor swimming for T1.

The majority of the boats cut cleanly through the volcanic lake while families on shore cheer loved ones on. The canoes collide as the paddlers approach T1. At the back of the pack, a Chilean competitor from the South American mainland falls repeatedly from the hand-me-down boat that the Rapa Nui islanders provided him. Charlie Haoa, a dance director, leads the race by a narrow margin and gets ready to tackle the second leg of the tri: the banana run. 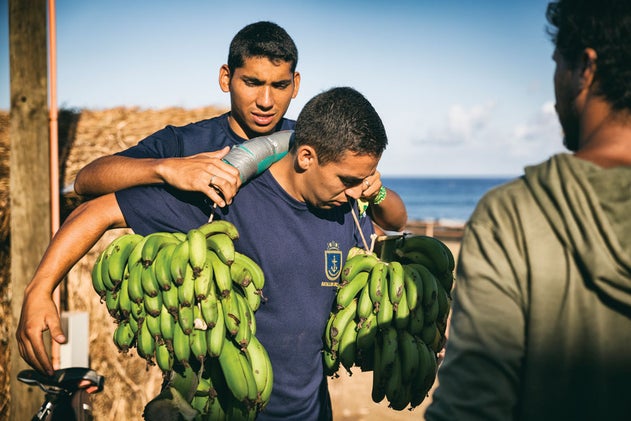 Children playing war games in the marshes launch mud missiles over the competitors’ heads as they come into transition. The leaders abandon their boats and leap into the chocolatey waters to wade toward the shore.

Meanwhile on the bank, three race organizers have been preparing 22-pound bunches of bananas since the early morning. With help from the 15 marshals now out on the course, they steadily cut away the fruit and placed it on lakeside weighing scales until the bunches met the target weight. Competitors each carry two bunches sealed in cling wrap, paired with cord that lets them choose varying methods for carrying the load: thrown over both shoulders and clamped against the chest, or alternated from shoulder to shoulder with the weight distributed across the chest and back. Regardless of technique, the combined weight for the 22 to 40 age group is a monstrous 44 pounds; men over 40 carry just 22 pounds, and the women and 17 to 21 age group run weight free.

Hundreds of spectators jump to their feet in the excitement of the banana running stage. The island’s entire population numbers just 5,000, and more than half of them are here cheering the athletes on as they run the initial 1,000-meter banana lap from the shore.

Haoa rounds the lake first, deposits his bananas and begins a half lap on a higher trail past the moai statues, near the top of the crater. After about nine minutes of running, the leading athletes descend from the high trail, returning to the lakeshore start once more.

Although the athletes’ arms are drained from paddling and hugging bananas tightly to their chests while running, they must now find another gear at T2. Here they take to the water once more, this time with a thinner handmade float. These surfboard-style boats were also constructed in the months before the race, and are made of two bunches, each of 150–200 reeds.

Haoa swims across the 400-meter stretch of water in less than five minutes, lunges into the muddy marshes, and comes powering out of the lake to cross the finish line first in just under 18 minutes.

“While most of the triathletes train together,” says Pakarati (who places 14th of 20-something athletes), “some as in Haoa’s case prefer to train alone, so fellow competitors don’t know their potential.” Clearly it paid off for the winner who punches the air before congratulating others as they come clattering through the reeds and mud missiles to the Tau’a Tri finish.

Ten minutes later, the final competitor swims in the lake below. His right arm sports a tattoo of a moai statue. While modern scientists still puzzle over the riddle of how ancient islanders moved these 14-ton sculptures across the island, the Rapa Nui believe it was the mana, a powerful life force believed to exist in all things. Legend says that it made the statues simply walk into place. As the remaining swimmer makes his last strokes through the reeds, the moai body marking on his bicep seems to dance back and forth. Perhaps the mana is present, the life force working through him.

 Tapati 2017 is already confirmed for Jan. 27 to Feb. 12. The triathlon is typically held on the Saturday or Sunday of the festival’s first weekend. Check English language blog at Imaginaisladepascua.com/en for more information.

Though foreigners can’t run the Tau’a Tri, spectators are welcome. The Easter Island Triathlon, with a swim/bike/run format, draws 300 athletes and spectators every June (see more below).

Held every June since 2001 and open to only 60 entrants, this event got its start after race director Rodrigo Salas raced a one-off tri of a half-mile ocean swim, 21-mile mountain bike, and 4-mile run on the island in 1990. Triathlon legends Mark Allen and Emilio De Soto also competed in that event.

 The swim is two 950-meter laps in the Anakena Bay.

 The bike traverses the island in three out-and-back hilly loops of 18.5 miles each.

 The run follows the same route but doubles back sooner, making this a single, shorter 13-mile loop.

 The triathlon is the first day of an optional three-day event called the Rapa Nui Trophy. There’s a 40-mile mountain bike race on Saturday, June 3, and a marathon on Sunday, June 4. All participants receive medals, while the winner receives an ornamental wooden scepter.

 Temperatures range between high 50s and high 60s in June, with a chance of tropical showers.