For athletes looking for an autumn/race getaway, these seven events will offer you scenic courses for those last triathlons before heading into the off season.

The Lake Geneva Triathlon offers the ultimate getaway from city life. The race starts with a swim at Edgewater Park beach in downtown Williams Bay, Wisc. and is followed by a bike course on secluded roads; it ends with a run on quiet, tree-lined residential streets. The entire event is held in a small lakeside village. The hills are killer, but the picturesque views make it worth the effort. 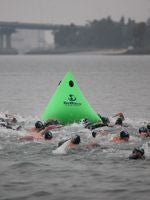 The TriRock Series kicked off in 2010 with this San Diego event to rave reviews from the participants. The race offers the opportunity to swim with scenic Coronado Bridge in the panorama, bike in a restricted naval base, run around Seaport village and finish on a red carpet. The best part? A catered breakfast and beer garden for all finishers.

Triathletes will start the swim of the Amica 19.7 Newport, R.I. location at Third Beach and enjoy the calm waters from the Sakonnet River. The bike course covers 16.1 miles and traverses through the colorful, historic neighborhoods of the towns of Middleton and Portsmouth. The race ends at Sachuest Beach—where the sand is soft and white and very family friendly.

Consider the Farmington Women’s Triathlon for an active girls’ getaway weekend—Farmington offers an ideal backdrop with its vibrant fall foliage and crisp mornings. The half-mile swim occurs in Dunning Lake at Winding Trails and is followed by a 12-mile bike through the quiet roads of quaint Farmington and Avon. The run ends on the dirt trails of Winding Trails. First timers are given their own swim wave and all racers are rewarded with a healthy post-race buffet.

The Kokopelli Triathlon takes place in Utah’s newest state park—Sand Hollow. This race is attractive not just for the scenic, red sandstone landscape and mild temperatures, but for all the outdoor activities available. Athletes can boat on the reservoir, sleep under the stars at one of the campgrounds, go off-roading in the dunes of Sand Mountain, and fish for their post-race meal out on the water.

Seattle “Escape from the Rock” Triathlon

At Seattle’s “Escape from the Rock” Triathlon, athletes bike across one of Seattle’s well-known landmarks—the floating bridge. This end-of-the-season race begins in popular Lake Washington at Luther Burbank Park with a half-mile swim and ends with a 2.5-mile run on a path through Mercer Island—a city that sits on an island in Lake Washington.

Buzzard’s Bay Sprint Triathlon in Dartmouth, Mass. is known for its stunning bike course, which offers views of the bay, farmhouses and stonewalls, and of course, brilliant autumn foliage. The swim portion takes place in a secluded cove with temperatures hovering around 70 degrees F, and the run is mostly under a tree-lined arched park road.