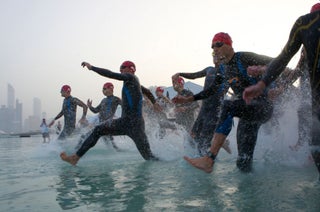 Clayton Fettell asserted himself from the gun, putting seconds on the outstanding swimmers in the field in the first lap then stretching his lead to a full minute by T1. The brave soloist was followed by a thundering pack containing 15 of the favorites, including Dirk Bockel, Frederik Van Lierde, Faris Al-Sultan, Paul Ambrose and Eneko Llanos. They thundered through transition and heading out on the bike together. Chris Lieto, however, was notably absent. He came out of the water close to James Cunnama, another strong rider, but several minutes behind the competition. The pair grouped up with Leon Griffin and started charging toward the chase pack.

Surprisingly, the first mover on the bike was Paul Ambrose. He tore off the front of the group and quickly bridged to Fettell. The pair rode into the Yas Marina Circuit Formula 1 course together with Llanos driving the bus down the road. Al Sultan was next to peel off the front of the group and he took third on the road before entering the racetrack for the second time, only 35 seconds behind the leading duo.

Last year, Chicagoan Andrew Starykowicz dominated the bike ride and earned a massive lead by T2, but suffered in the heat and faded to 11th place. He seemed to take a more conservative race strategy this year, and he waiting until half way through the ride to assert himself. He pulled up toward Al-Sultan and was clearly pressing once in the racetrack. He cut aggressively through the first corner and cruised up the road in search of the leaders 80 seconds ahead.

Three minutes later the chase pack rode on to the Circuit with Chris Lieto tucked in. His chase partner Cunnama rolled in shortly after, leaning forward on his bike. His saddle rails broke shortly after bridging to the leaders, sheering completely in half, so he was forced to drop out.

While the early favorites bided their time, Starykowicz started to charge for the front. He eventually passed Al-Sultan, then a fading Fettell who was paying for his early lead, and then finally Ambrose to take the top spot. Weather stayed moderate with a subtle breeze and 75 degree temperatures, so Starykowicz appeared to have a better chance of holding on during the run this year. It wasn’t to be, however. He crashed close to the finish but bravely got back on his bike with a sore shoulder and road rash on his right knee. Although he arrived in T2 first, his lead was brief. The race doctor chased him down in the changing tent and soon after Starykowicz emerged with his race kit pulled down off his shoulders. The announcer relayed that he may have a broken shoulder.

Ambrose was first on to the run course and Al-Sultan came through 60 seconds later. Fettell tried to lead wire-to-wire, but came in to T2 with the big group, five minutes behind Ambrose. The survivors were Rasmus Henning, Andi Boecherer, Fraser Cartmell, Dirk Bockel, Luke Bell, Chris Lieto and Fredrik Van Lierde. Henning stormed first out of T2 in pursuit of Ambrose and Al-Sultan with the other seven close behind.

Al-Sultan showed how badly he wanted to win this race and drove past a fading Ambrose to take the lead. His stalkers were gaining on him, but half way through the 20km run Al-Sultan still owned a 2:05 advantage. Henning was his closest pursuer, and Llanos, Bockel and Van Lierde were all just a few seconds further back. Running full out, the Abu Dhabi Triathlon Team member still couldn’t keep Henning at bay. The Dane pulled even with about two miles remaining and the pair ran side by side until Henning attacked and took the lead for good. Henning took the win in 6:21:44, earning a course record. Al-Sultan finished second, with 2010 champ Eneko Llanos rounding out the podium.

Rachel Joyce, Emma-Kate Lidbury and Caroline Steffen were able to keep Jodie Swallow in sight through the first lap of the two-circuit swim course, but soon after the Brit re-entered the water, she blew the rest of the field away. Her lead of 15 seconds after the first lap quickly grew and by the then Swallow ran through the change tent and in to T1, her closest chasers were a full two minutes behind. Minutes after, Steffen, Joyce and Emma-Kate Lidbury pedaled onto Corniche Road, the two other pre-race favorites—Ironman 70.3 Panama champ Angela Naeth and 2011 Ironman 70.3 World Champion Melissa Rollison—finally emerged from the change tent. They were 5:00 and 5:30 behind Swallow. Rollison quickly passed renowned cyclist Nikki Butterfield and started gaining on Naeth, who maintained a small gap.

Swallow’s large lead over the other racers put her in a precarious position. She typically races from the front, gapping everyone in the swim and keeping the pressure on during the bike, but her biggest rivals were grouping together and she was facing the prospect of riding 200km alone. By the time the leaders made the first pass through the swooping corners of the Yas Marina Formula 1 racetrack, Swallows lead was shrinking. Race commentator Julie Dibens reported that Steffen rode the fairly short track section 30 seconds faster than the others.

Part way through the second lap of the bike course, the race started to sort out. Rollison, Naeth and Butterfield pulled themselves up to Steffen, Joyce and Lidbury started to lag and Swallow, perhaps thinking better of riding 130 miles by herself, came back to the other four. By the time they entered the Yas Marina Circuit for the second and final time, they were riding 2 x 2 with Rollison dangling 10 seconds behind. The four leaders circled each other, but Rollison faced the wind by herself. Anyone hoping to win would have to put significant time on the former elite runner Rollison, but so far no one was up to the task. Along the road back to T2, Butterfield drifted back toward Rollison, who was still watching the leaders but doing all her own work.

Butterfield’s patience finally started to pay off in the final 20 miles. Swallow started to fade, then Rollison, then last year’s runner-up Steffen. Naeth hung close to Butterfield, but even she was gapped. Butterfield, a new mother, kept the pressure high all the way to transition and started the run with 2:05 on Naeth, 4:10 on Steffen, 5:50 on Rollison and 6:15 on the early leader Swallow.

The gaps between the top four would stay almost the same all the way through the finish. Butterfield took the win and crossed the finish line with her young daughter Savana. Naeth put together a solid run to finish second and Caroline Steffen was also very proud of her third place finish. Although Rollison is by far the most accomplished runner in the field, she rolled an ankle three weeks ago and has only run twice in that time. Her run speed wasn’t as vicious as usual. Swallow suffered in the run but was passed only by Rachel Joyce.

More of our coverage from Abu Dhabi.