Flora Duffy at the front of the bike leg of the women's race. Photo: Wagner Araujo/World Triathlon

The power file of newly-crowned Olympic triathlon champion Flora Duffy reveals what we all suspected—she executed a perfect race. Unlike the power file of men’s Olympic champion Kristian Blummenfelt, which featured plenty of surges at 900+ watts, Duffy’s file is far smoother with less spikes and more consistent power across the 25-mile bike course (although much of that is due to how the race played out, thanks to the tropical storm that swept in just before the start).

The data, which came from her Hammerhead Karoo 2 bike computer, shows a moving time of 1 hour 4 minutes and 58 seconds, an average speed of 21.7 mph, and a maximum speed of 39.4 mph. Her average power was 220 watts with a maximum power of 654 watts and an average cadence of 95 RPM.

We asked exercise physiologist and triathlon coach Alan Couzens to give his expert analysis of Duffy’s file, and one of his first observations was how Duffy’s power to weight ratio (w/kg) was higher than Blummenfelt’s. He said: “If we look at the average power of Flora’s file, she put out an average of 221 watts. This was only 60 watts less than the men’s race and, if we look at it on a watts per kilogram level, Flora’s average power of ~3.8 w/kg was actually a little higher than Kristian’s 3.7 w/kg. However, the spikes in her file are a little more moderate.”

Couzens agreed that the race dynamics and conditions likely contributed to this: “With the 50+ tight turns over the course, coupled with the wet roads, it was certainly not the type of day that would lend itself to some of the aggressive surging we saw in the men’s race.” 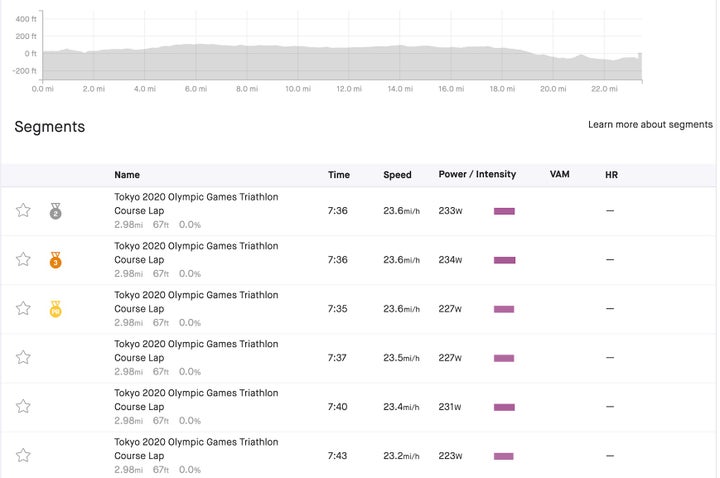 And, of course, the fact that Duffy had a much better swim than Blummenfelt—she was sixth out onto the bike and into a breakaway lead pack—also put her in a much stronger position tactically and strategically, without having to throw down the huge surges needed to bridge up to the front pack as Blummenfelt needed to in the men’s race.

“This file shows a much more consistent application of power and less “surge-y” accelerations into and out of the corners due to the differences in conditions,” Couzens said. “The women’s race had the more typical bump in the power histogram, where we see a good chunk of the race taking place in and around the threshold levels of 4.5-5.0 w/kg. This consistent, steady application of power through much of the race enabled the lead pack to establish a one-minute lead over the chase pack and set Flora up beautifully to unleash a superior run over the final 10K.”

Duffy went on to post a 33-minute 10K run split to take the gold medal, which is Bermuda’s first Olympic gold medal and has since led to the 33-year-old earning hero status on the island.

RELATED: What Does Training Look Like for Gold Medal Favorite Flora Duffy?

As Paralympics Open, Support and COVID Numbers Both on the Rise in Japan

Commentary: The Olympic Women’s Race Showed Us How to Make Your Perfect Day

What is Normalized Power vs. Average Power?

What is Coefficient of Drag—And Why Should You Care?