It’s not every day you open Strava to find the bike power file from a freshly-crowned Olympic gold medalist, but then Kristian Blummenfelt seems to love making the extraordinary appear ordinary.

After his Herculean effort to win the men’s Olympic triathlon this past Sunday, the Norwegian shared his bike data with all 24,000 of his Strava followers—and we’ve since spoken with his coach, Arild Tveiten, who said this effort on the bike was “not especially hard—compared to his capacity, I would say it was quite an easy bike and didn’t cost him too much.”

Nevertheless, for mere mortals, the data geeks rejoiced to see stats such as a peak power of 987 watts and an average of 313 watts for the 24.81-mile course. The file showed he’d uploaded it from his Garmin Edge 1030 Plus, and he’d posted a bike split of 56 minutes 41 seconds, averaging 26.3mph with a maximum speed of 44.1mph. As of Tuesday evening, he’d received 8,652 kudos and 465 followers had left comments.

Tveiten, who is director of the Norwegian Triathlon Federation, said: “When you look at this power profile, you see they pushed hard the first lap to establish the groups. After lap one, the dynamics of the race changed so that the main group did what they needed to stay in contact with the first group. Here, Kristian and Casper [Stornes, fellow Norwegian] controlled this well. When we had all the Norwegians in the main group it was one lap of moderate effort and the groups were together.”

He said after that it was “more or less a training ride, intensity-wise” and his athlete was not at his limit, adding: “It was all about staying close to the front and avoiding any accidents. In the end, it was quite an easy effort, so he started the run with fresh legs.”

Strava spokesperson Michael Joseph said the company was “delighted” to see Olympians—especially those atop the podium—posting to their platform, and duly responded by creating a segment for the Olympic triathlon bike course, for which Blummenfelt then snagged the KOM, as well as the Local Legend status.

When it comes to pro triathletes, Blummenfelt has the second-highest number of followers on Strava, behind the 2008 Olympic triathlon champion and three-time Ironman world champ Jan Frodeno (who has 27,700 followers), having just nudged Britain’s three-time Kona runner-up Lucy Charles-Barclay out of second spot with her 23,500 Strava fans. 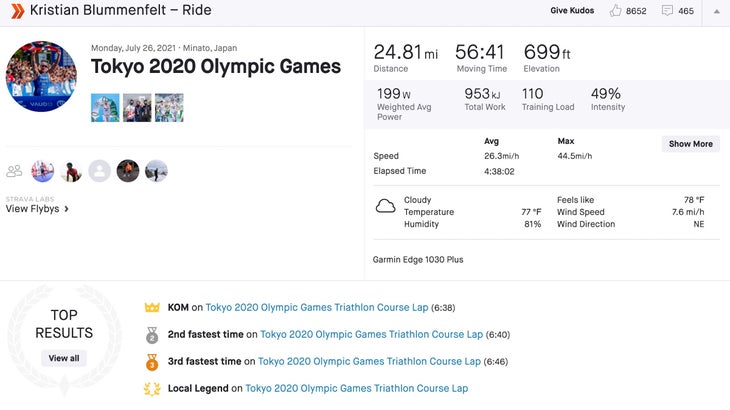 Where Power and Strategy Meet

We put Blummenfelt’s power file in front of two elite triathlon coaches to get their insights on his performance. Coach Jim Vance said: “You can see from this file that early on the surges and the effort is the highest, which is common in ITU. There’s a sorting out, and trying to get in the best pack on the road to close the gap to the leaders.”

Vance noticed that the pace of the ride greatly decreases (up to 30 seconds difference between early laps and later laps), once the breakaway was caught. And although there was a decreasing trend in speed on each lap (and with it also a decrease in power), the level the power surges got to generally stayed high. “The efforts between the surges noticeably declined, as he looked for ways to maintain his position near the front of the pack, and still conserve for the run,” Vance said.

The strategy is clear in the final lap, where the average watts are about 10% higher, and Vance said: “This is likely due to the effort to get to the front of the peloton at the dismount line, as the last few minutes of the last lap are noticeably higher than the rest of the lap.”

Here are Blummenfelt’s peak watts by lap, which Vance said tell a lot about his effort overall:

Vance added: “The peak efforts were there, even as he decreased his overall watts in order to maintain a safe position in the pack, keep his rivals from breaking away, and still try to conserve for the run. It’s pretty impressive.”

He also noted that the biggest power spikes always tended to happen in the same place on the course, right as the athletes exited the transformer statue park with a tight right turn down and onto the road, (where a crash happened in the women’s race) into the left hand U-turn, before they went under the overpass and uphill into the next left hand U-turn, which was about the middle of each lap.

“In a lot of ways, his file looks more like a mountain bike race—with fairly moderate levels of output in the bunch coupled with some huge accelerations at the bends when an opportunity to move up became available,” he said.

Blummenfelt’s FTP (Functional Threshold Power) is set to 410 watts in Strava (with his weight shown as 75 kg or 165 lbs).

Couzens said: “While the overall average power (280w) of the ride was well under his FTP, the gnarlyness of the course is revealed when you look a little closer at some of the peaks in power caused by all of those hairpin bends where he had to accelerate hard in order to make his way up the field (after coming out of the water in 26th place).

All in all, he spent 11 minutes of his 56-minute bike split above threshold, with his lactate on the rise, Couzens noted.

“Many of these 11 minutes worth of spikes were pretty close to maximal efforts for Kristian and, for me, it’s all the more impressive that, due to the nature of the bends on the course where there wasn’t a lot of space to recover between corners, these efforts were in quick succession, with a few particular segments that make my legs burn just looking at them!”

Couzens highlighted one section of the power file where Blummenfelt did 3 x 20 seconds on, 10 seconds off, at 785 watts, 921 watts, then 978 watts. “He was doing Tabata efforts in the middle of the Olympic race,” he joked.

He concluded: “Kristian’s ability to clear the significant lactate that comes from these repeated surges while at or close to threshold speaks to the superior conditioning that he was about to show on the run. Leveraging these repeated maximal efforts to move from 26th to 8th off the bike had him in prime position to unleash the run of his life and grit his way to the gold.”

As Paralympics Open, Support and COVID Numbers Both on the Rise in Japan

Commentary: The Olympic Women’s Race Showed Us How to Make Your Perfect Day

How to Watch Paralympics Triathlon