The race kicked off with a calm but chilly swim in Tempe Town Lake with roughly 2,800 age-group athletes at the start. Leading the men’s race after the swim was Canadian Wolfgang Guembel, followed by first-time Ironman Richie Cunningham of Australia and Belgium’s Axel Zeebroek. Brit Leanda Cave was the leader after the swim in the women’s race. Cave exited the water with a three-minute advantage over American Gina Kehr and continued to extend her lead during the early miles of the three-lap bike course. 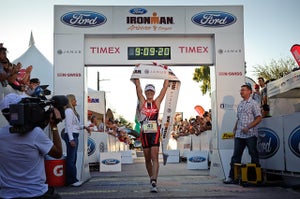 In the men’s race, the bike leg was all about Rapp, who crushed the bike-course record by posting a 4:22:30 split. The only man able to keep sight of Rapp was Tollakson, who hit T2 three minutes back of Rapp after a 4:25:28 split. The women’s bike-course mark also fell, courtesy of McGlone’s 4:56:48 ride. The Canadian’s record-setting ride wasn’t enough to take the lead from Cave, who entered T2 first with a four-minute advantage of McGlone.

Not much changed in the men’s standings during the marathon, as Rapp controlled the tempo from the start and never looked back. This year’s Ironman Canada champ finished today’s run in 2:55:45 to secure his second Ironman win of the season. Tollakson held off a late charge by German Torsten Abel to hang onto second. In the women’s marathon, Cave struggled to maintain the lead early on as McGlone made up a considerable chunk of time in the first 10K before making the seemingly inevitable pass. The Canadian (who calls Tucson “home” nowadays) sealed the win with a 3:10:10 marathon, besting all but runner-up Corbin, who posted a 3:04:57 run-split. Aussie Kate Major finished just over six minutes back of Corbin to complete the podium.

For video footage of the race, watch TriCenter.