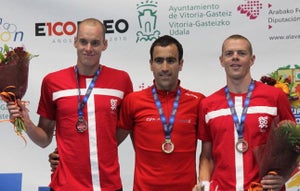 It was the second European Long Distance title in a row for Berasategui, who started the day with a three-minute swim deficit to defending Long Distance world champ Jodie Swallow of Great Britain. The Spaniard was untouchable on the bike, however, covering the 120-kilometre bike course in 3:10:59-over ten minutes faster than Swallow. The Brit put on a surge on the run, but it wasn’t enough to catch the leader, as Berasategui broke the finishing tape in 6:14:46, just over four minutes ahead of Swallow. Italy’s Edith Niederfriniger rounded out the podium, finishing a distant third in 6:41:01.

Tough competition was served up by the Danish team in the men’s race, but in the end no man could match the long distance speed of Spain’s Eneko Llanos, a three-time XTERRA Triathlon World Champion. Denmark’s Martin Jensen and Jimmy Johnsen stayed with Llanos for the 4-kilometre swim and 120-kilometre ride, but the Spanish superstar was too quick once the trio started the 30-kilometre run. Llanos, the 2003 ITU Long Distance Triathlon World Champion, pulled away to finish in 5:35:34, one-and-a-half minutes ahead of Jensen. Johnsen completed the great day for the Danes by rounding out the podium, finishing another two minutes back.