The greatest triathlon in the world took place on Sunday. It might not be the most significant triathlon in the world, and it never will be. Kona will always wear that crown, but Roth has some things that Kona doesn’t. There’s an atmosphere and energy surrounding the entire course that you won’t find anywhere else. The support from the community is almost bizarre. The frenzy around the finish is livelier, although much of that has to do with the fact that there’s better beer and food, and typically less heat exhaustion.

If you’re reading this, there’s a 90 percent chance that you’ll never qualify for Kona. But you can go race Roth, and you should. Aside from the swim taking place in a shipping canal that I wouldn’t swim in more than once per year, Roth is nearly perfect. The professional field this year wasn’t quite as strong as in years past, with the German trio of Frodeno, Lange, and Kienle taking care of their Kona qualification last weekend and Frankfurt, and Daniela Ryf waltzing to a win at Ironman Austria this weekend.

Lucy Charles-Barclay watched the win slip away in the final kilometers last year in Roth, but this year’s version of the two-time Kona runner-up appears to be a smarter racer and, more importantly, a faster runner. She’s still racing full throttle in the water, and her 49:01 swim split from Sunday was only bested by Sweden’s Jesper Svensson, who went on to finish second in the men’s race. Charles-Barclay even managed to outswim perennial swim standout Andy Potts by more than a minute, and was a full five minutes faster than third-place male Cam Wurf, who said afterward that it took him a good 25K on the bike just to catch Lucy and find the men’s race.

The non-wetsuit swim set Charles-Barclay up for smooth sailing all the way to the finish, and she finally got to enjoy Roth’s unique festivities at the finish, where she collapsed after losing by just eight seconds to Daniela Bleymehl last year. (Bleymehl finished third on Sunday, with Aussie Sarah Crowley joining them on the podium in second).

It’s the biggest win for Charles-Barclay, who has a number of notable runner-up finishes on her resume. Considering that Daniela Ryf doesn’t appear interested in early retirement, it might be a while until she has a more significant victory. But at least it looks like the gap is closing between Ryf and Charles-Baclary. We might still be a year or two away from seeing them battle side-by-side in the closing kilometers in Kona, but considering Charles-Barclay didn’t have a bike or know how to run five years ago, she’s bound to keep making up some ground. And Ryf can only get so much faster, right? It’s hard to imagine she’s not at least close to her limits, and Charles-Barclay is finding new ones every day.

Andreas Dreitz has grown up riding on the roads of Bavaria, and on Sunday he got to experience an electric crowd, as the local favorite finished one spot better than a year ago. Hailing from Lichtenfels, about 100K due north of Roth, this win has special significance for Dreitz, who simply said, “The victory here is insane.” At 30 years young and in his seventh season as a pro, the Franconian is coming into his own and has a shot to make his way onto a Kona podium already very crowded with Germans. He finished 13th in Hawaii last year, but afterward some speculated that he was acting as a domestique for Patrick Lange on the bike. He has the riding chops to be closer to the pointy end of the race on the bike, and that could put him in the mix on the later stages of the run.

The runner-up finish by Sweden’s Svensson is a breakthrough result, but he’s still not even close to being the most famous Jesper Svensson in Sweden. He’ll likely have to win Kona to outshine professional bowler Jesper Svensson, who is one of the best “athletes” on the PBA Tour.

Wurf rounded out the podium in third, and of course he didn’t disappoint when I asked him for a list of excuses afterward. He did crash his bike and break his nose and a few ribs two weeks ago, so at least those excuses were more valid than usual. I’m still picking him to finish on the podium in Kona, and I think he’ll be joined by David McNamee, who is aiming for a third-straight top-three finish on the Big Island. While McNamme’s fifth-place showing on Sunday won’t garner any headlines, he did drop an eye-popping 2:41:01 marathon, which is now what it takes to have a shot at winning Hawaii.

On Saturday, August 1, 2020, millions of people who have never seen a triathlon will look at their TVs and have the very same thought: “Wow, triathlon is way cooler than I thought it was.” That’s when the triathlon mixed relay will make its Olympic debut, and it’ll be one of the greatest moments in the relatively short history of our little sport.

It’s a thrilling format, and it was on display at one of triathlon’s most thrilling venues in downtown Hamburg this weekend. The French team has proven to be the favorites as the mixed relay heads toward its first Olympics, as perennial triathlon powers like the U.S. and Great Britain have a little more than a year to catch up. France won its second consecutive mixed relay world title on Sunday, with Vincent Luis showing that he’s perfectly built for the anchor leg of the fast and furious format. As long as the first two members of the French team can keep them in this mix in Tokyo next summer, the three-four punch of Cassandre Beaugrande and Luis is going to be nearly impossible to beat. The Grand Prix de Triathlon series has enjoyed tremendous support from athletes, fans and the French federation for the last decade, and now that commitment to fast, spectator-friendly racing might pay off with the sport’s first relay gold medal.

The individual races in Hamburg were yet another reminder that Joel Filliol is one hell of a triathlon coach. Athletes from his “JFT Crew” took the top four spots in the men’s race, and Non Stanford claimed top honors for the women. I have no idea if Filliol has his athletes do additional bike-handling work when the forecast calls for soggy conditions like they had in Hamburg, but his group appeared to be the only ones staying upright.

At the end of the men’s race it was Aussie Jake Birtwhistle sprinting to the win over JFT Crew teammates Luis, Jelle Genns (BEL), and Mario Mola (ESP). While Mola started the season as the clear-cut favorite for gold in 2020, things are becoming very crowded at the top of the men’s ITU ranks, with any of the top 12 guys having a shot to claim some hardware in Tokyo. 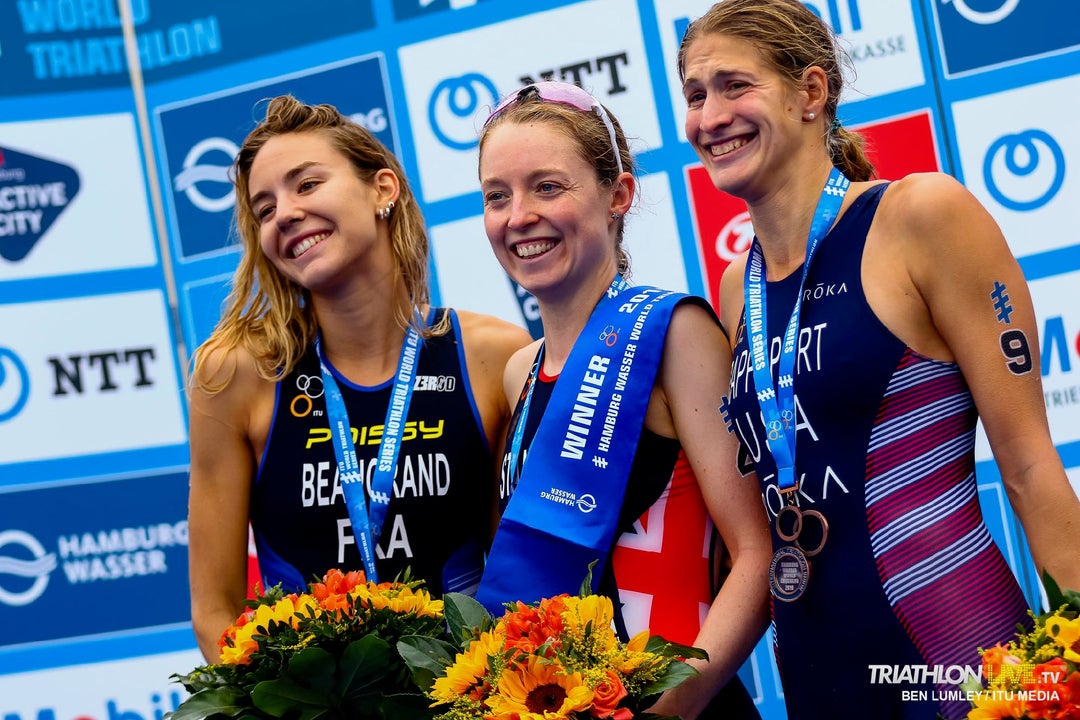 It was a huge statement win for Stanford, who was running the risk of missing out on the Olympic team after a string of injuries had her absent from the WTS podium for the last year. If she’s the top Brit at the Tokyo Test Event in mid-August, she’ll be a near-lock for the British team, as will Vicky Holland, who has the easiest path to Tokyo as a returning medalist. The third and final spot on the very deep British women’s team will likely be up in the air until next summer, but 25-year-old Georgia Taylor-Brown is rounding into form at just the right time and will give Britain three legitimate medal chances.

After jumping from Montreal to Hamburg, the WTS series heads back to Canada for the Edmonton event on July 20-21, before athletes gear up for the biggest race of the Olympic cycle at the Tokyo Test Event on August 15-18. Edmonton and Tokyo will have both individual and relay events, and we should have a much clearer picture of the 2020 Olympic field after August 18.