It’s the calm before the storm in what should be the most spectacular two days of short-course racing this year at the ITU’s Dextro Energy World Championship Series race in London. 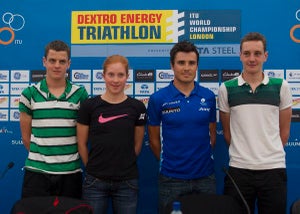 Click here to view a pre-race photo gallery from London from Paul Phillips.

The triathlon venue that will serve as the ITU’s Olympic test event and many countries’ first Olympic selection event was quietly being built this morning in the middle of London’s Hyde Park while most of the athletes were resting in their hotel rooms or getting in some easy workouts.

But Saturday at 8:36 London time (3:36 a.m. EDT) the women will descend upon the Serpentine to race in what will likely be the fiercest race with the deepest field this year, with athletes not only competing against each other for the win and overall World Championship Series points but also competing against their countrywomen for a spot on their individual Olympic teams.

Americans Hunter Kemper, Matt Chrabot, Manny Huerta and Jarrod Shoemaker did make it out of their hotel rooms today to take some photos for USA Triathlon, and American Sarah Groff briefly stopped by to say hello. The air was lighthearted and relaxed, with the athletes resting on their hotel’s steps while they waited for the photographer.

Despite the relaxed mood of the athletes today, the venue was buzzing with media, retailers and construction workers. The event’s organizers have credentialed more than 200 journalists this year, with demand for credentials from all over the world, and the men’s race will be aired live on BBC TV.

Most pundits are looking at pre-race favorites such as Alistair Brownlee, Jonathan Brownlee, Javier Gomez, Paula Findlay, Helen Jenkins, Emma Moffatt and Emma Snowsill to pull off the win this weekend, but the beauty of a one-day race such as a this Olympic test event and the Olympics itself is that anything can happen.

“In the Olympic Games, a one day race, anything can happen. It doesn’t matter how many races you’ve won before. You have to go out there that day and perform well and give your best.” Gomez said.

If you live in the United States and you’d like to watch the race live, log on to Triathlonlive.tv, which also airs replays of the event.

Fun Facts About the Event:

The race this weekend will be the first time triathletes can race on the proposed course for the Olympic Games, making it the perfect venue for an Olympic Trials.

The race will also be important in deciding who will be the overall ITU short-course world champion. Currently, Spain’s Javier Gomez leads the men’s overall ranking and Chile’s Barbara Riveros Diaz leads the women’s.

Quote of the event so far: “I don’t get out of bed to try to beat Simon Whitfield or Javier Gomez. I get out of bed because I love training, and I love racing and I love trying to beat [my brother] Jonny most of the time.” —Alistair Brownlee of Great Britain