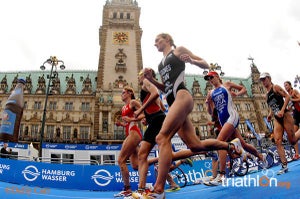 Round four of the Dextro Energy Triathlon ITU World Championship Series heads to Hamburg this weekend as part of the world’s largest triathlon. The event will take place alongside the Hamburg City Man Triathlon, which has over 12,000 registered racers in the age group, youth and relay events. All races will feature an extraordinary finish in front of the world famous Hamburg Town Hall.

The Elite men will be the first the race, starting off at 1:30pm on Saturday, July 17. Heading into the event Russia’s Alexander Brukhankov leads the ITU World Championship Rankings with a narrow advantage over his countryman, Dmitry Polyansky. Both men are on the start list in Hamburg and will no doubt look to get away from the pack during the 1,500-meter swim in the River Alster. Polyansky has been dominant on the swim leg this year and teammate Brukhankov is never far behind.

Keeping tabs on the Russians will be Spain’s Javier Gomez, who is two weeks removed from a runner-up finish at the European Championships in Athlone, Ireland. With red hot Alistair Brownlee resting this week before round five of the Series in London next weekend, Gomez should have a good opportunity to grab his first Series title of 2010.

Also looking for his first Series win of 2010 is Australia’s Courtney Atkinson, who is currently ranked third in the world. The Aussie has had two near misses this year, dropping finish line sprints to Jan Frodeno in Seoul and to Brownlee in Madrid. Frodeno is sure to be in the mix as well, and will look to take his second Series title of the year in front of the home crowd. He’ll be joined by German teammate Steffen Justus, who is fresh off of a fifth-place showing in Madrid and has moved up to sixth in the world rankings.

Others to keep an eye on in the men’s competition include American Jarrod Shoemaker, who had a brilliant run to win in this event last season, and the always-tough Kiwi Bevan Docherty, who took top honours at the opening round the Series in Sydney, and also recently won the Philadelphia Triathlon.

The women’s race gets underway at 3:30pm on Sunday, July 18 to wrap up the weekend of racing action. Headlining the field is defending world champion Emma Moffatt of Australia, who finished as the runner-up at the Hy-Vee Elite Cup in Des Moines four weeks ago. Taking the top spot in Des Moines was Moffatt’s countrywoman, Emma Snowsill, who appears in top form and will look for her first Series win of the season in Germany.

The pair of Aussies will look for another one-two podium punch in Hamburg, and will certainly be helped by the absence of world number one Barbara Riveros Diaz of Chile, who is taking a rest from racing this weekend. With the current points leader idle for this round, the leader of the world rankings after this weekend may very well be Japan’s Mariko Adachi, who currently sits 315 points back of Riveros Diaz. With 800 points available to the race winner on Sunday, Adachi is well within striking distance of becoming the new world number one.

Looking for her third major win in a row in Germany will be Switzerland’s Nicola Spirig, who is fresh off of winning the European Championship for the second consecutive year. She’ll be joined by fellow Swiss standout Daniela Ryf, who won round two of the Series in Seoul and is currently the third-ranked woman in the world.

Other women looking for the win on Sunday include Kiwi Andrea Hewitt, who has shown great running form this season, and Sweden’s Lisa Norden who finished third at the European Championships in Athlone.

About the city:
Hamburg is the second largest city in Germany (after Berlin) and the seventh largest in the European Union with a population of 1.8 million. Hamburg is also home to Europe’s third largest port (behind Antwerp and Rotterdam). With over 2,300 bridges, Hamburg has more bridges than any other city in the world. Hamburg lacks skyscrapers and has no buildings higher than 10 stories.