John Kelly is a standout age-grouper triathlete who has had a very impressive 2018: multiple podium finishes, an 8:58 Ironman PR, and a world championship title. In some of his key races, including Ironman Mont-Tremblant, he posted bike and run splits faster than some men in the professional field. So it’s no surprise that Kelly, 33, has decided to step up and race as a pro himself.

But here’s the thing: Kelly, of Rockville, Maryland, will start with the pro field at Ironman Arizona. And once he crosses the finish line, he will end his career as a professional triathlete. Last month, Kelly took to Instagram to announce his plans to hang up his tri kit and focus on ultrarunning, at least for the foreseeable future.

“I’m officially a pro triathlete,” he wrote on October 29. “Racing in one and only one race at Ironman Arizona.”

The “one and done” approach to pro triathlon is unconventional, for sure. But Kelly is not your typical triathlete. The slightly built, unassuming data engineer gained somewhat of a cult following as an ultrarunner after winning the Barkleys Marathon in 2017, only the 15th person ever to finish the notoriously challenging trail run. And with one foot firmly planted in the ultrarunning world, Kelly came into triathlon just three years ago seeking a new challenge in between running events.

A decent high school runner from rural Tennessee who spent more time playing intramural flag football and softball in college than logging miles on the road, Kelly untapped his talent for endurance events in his early 30s. In 2015, he raced Ironman Maryland a few months after teaching himself to swim. “I was swimming three minutes per 100 meters,” he says of his first sessions in the pool. “And I had to stop and gasp after each one.” In his debut, Kelly survived the swim, rode a 2004 Cervelo he picked up on Craigslist, threw down a 3:14 marathon split, and finished sixth in his age-group.

The next year, with fancier gear and a lot more training, Kelly returned to Cambridge. With a cancelled swim and a 2:53 marathon, he placed second overall and booked his first trip to Kona. Zoom forward to 2018 and Kelly found himself on top of the age-group podiums in Ironman Boulder, Mont Tremblant, and the ITU Long Course World Championship. He earned his pro card. And the 8:58 finish time he posted in Kona this year, good enough for 25th in his division, matched his lifetime best.

So why stop now? Why not spend a season or two mixing it up with the professionals to see what he can do? Kelly’s decision was multifaceted. First of all, as a father of three small children, he’s a realist. Kelly doesn’t have the bandwidth to train 30 hours a week like a pro, nor can he quit his job to do so (he will spend about 10 to 15 hours a week training as an ultrarunner). And even if he regularly finishes in the money as a pro, it wouldn’t be enough to stay afloat financially.

“Triathlon has been a great challenge, but it is not something where you can support a family of five when you’re 34 years old unless you’re the top five in the world,” says Kelly. “And I’m not.”

Second, there’s what he considers to be the insurmountable obstacle of swimming. Despite major improvements in the water—he now swims about 1:40 per 100 meters in an Ironman—Kelly doesn’t see himself getting any faster.

“I’ve reached my threshold. I have put in as many hours as I can in the pool and I can’t get over the hill,” he says. “And when you are competing at the highest level, that is a really big hindrance.”

And then there’s his frustration with drafting. Kelly has written extensively on his blog, blasting what he calls flagrant cheating on the bike courses of major non-drafting races, including Ironman Texas and the World Championships in Kona. And while Kelly isn’t quitting triathlon solely because of this beef,  he says “it definitely made me not regret my decision, or have any thoughts of changing my mind in the near future.”

But mostly, Kelly’s choice came down to the simple fact that he’s more passionate about ultrarunning more than triathlon. And he believes he’s better at it. He has major races in mind, like the Moab 240 Endurance Race, and he’s eyeing more Fastest Known Times (FKT), which are individual speed efforts on a specified route. (Kelly currently holds two FKTs, one set in March over a 70-mile portion of the Great Smoky Mountains National Park and one set in January over 42 miles of the Appalachian Trail.)

Much like Olympic gold medalist Gwen Jorgensen—who walked away from triathlon to pursue the marathon last year—Kelly says he has yet to hit his potential on the trails and he’s curious to see what he can do.

“I think everyone is capable of gradually pushing their boundaries well past where they thought they were,” he says. “I continually surprise myself with that. And I want to find out how far I can push my own boundaries.”

Whether Kelly will ever head back to multisport, he won’t say. But he’s pretty sure it won’t be in a conventional race. He says events like the grueling XTRI series suit him—the longer, the grittier, the more miserable and the more obscure the race, the better.

“For me, it comes down to getting back to the roots of the sport and pushing myself while enjoying the experience no matter what, regardless of the outcome,” he says. “I’m not out there so I can brag about my accomplishments on Facebook. It’s because I want to embrace my love of the mountains and just go for as long as I can.” 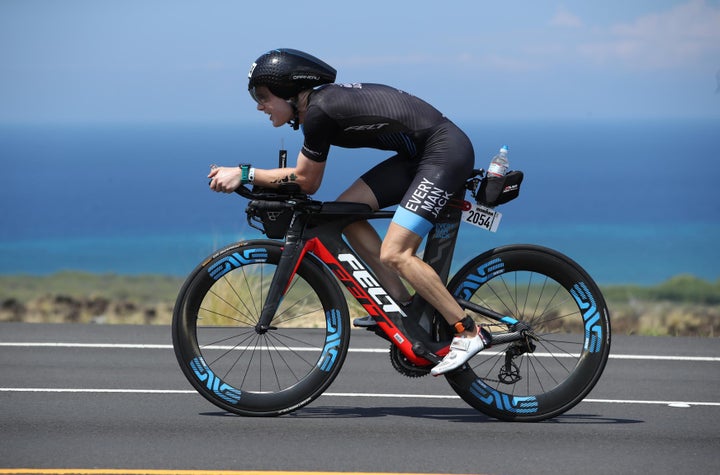