Huggo’s On The Rocks

You’re on island time now! Welcome to Kona, where you’ll find everything from coffee farms to some of the world’s finest snorkeling. This is where the famous warrior King Kamehameha, who united the Hawaiian Islands into one kingdom in 1810, spent his final years. And it’s where thousands of triathletes have gathered annually since 1981 for the most legendary multisport race on the planet.

Whether you’re in Kona to race, spectate or kick back, you won’t want to miss these special spots. And remember: Triathletes go fast, but island life moves slow. So don’t be frustrated if your daiquiri takes a long time to blend or your tour starts late—it’s all part of the experience. 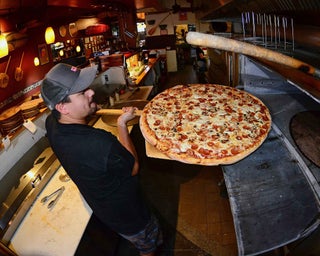 Despite its tiny size, this little gem boasts delicious, uniquely Hawaiian pizza by making its crusts with taro-root flour (it’s not gluten-free, but they do have an option). You can find a perfect pre-race meal (get the simple Margherita pizza) or a place to pound food post-IM (get the monstrous 28-inch Broke Da Mouth with provolone, Hawaiian ham, Italian sausage and pepperoni). Either way, be sure to plan ahead as quality takes time, and they get busy. Longboardlegendspizza.com

Huggo’s On The Rocks

While it may seem like this list is food-heavy, Huggo’s is about the views: Perched on the rocks overlooking the swim course, not only is the natural scenery incredible, but Huggo’s is also the spot where Kona icon Bob Babbitt films his “Breakfast With Bob” program during race week. The food at Huggo’s is good, but if you time your visit right, you’ll be treated to a panoramic seascape acting as a backdrop for a live Ironman talk show. Huggosontherocks.com 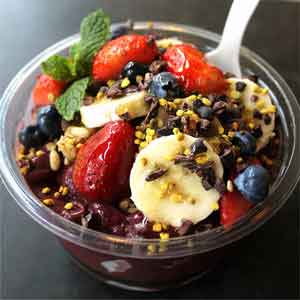 Centrally located one block off of the iconic run course on Ali’i Drive, this little cafe specializes in some of the island’s most delicious açaí bowls. While not uniquely local (there are Basiks on the mainland), these bowls are a perfect snack on the way out to Dig Me Beach or after a pre-race ride. For a more traditional bowl, try the Puna, a blend of açai, hemp milk and spirulina; for the adventurous, try the Kilauea, topped with papaya, goji berries, bee pollen and honey. Basikacai.com

If you’re trying to stick near town but still hoping to see some sights, check out one of the farms where arguably some of the best coffee in the world is made. Mountain Thunder is a great option because it’s a very short drive, it’s free and you get to sample some super top-shelf beans (their award-winning signature Cloud Forest Organic Estate Coffee costs $68 per pound). Pro tip: Bring a rain shell because it can get wet. Mountainthunder.com

Though it’s no secret, the Kona Brewery is worth mentioning because it is great for pre- and post-race eating (and drinking!). A big menu, close proximity to town and a big, fresh tap list ensures that racers stay relaxed and supporters stay sane. Eat: the Naalehu Nachos (add Kalua pork). Drink: Pipeline Porter. Konabrewingco.com

Easily the most inescapable spot in the entire Kona universe, just short of Dig Me Beach, Lava Java is the next best landmark for pro spotting and checking out everyone’s “race shape.” Recently, Lava Java has also become a hotspot for triathlon industry events, so expect to ogle some pretty sweet tech. Also really good (albeit pricey) coffee. Islandlavajava.com 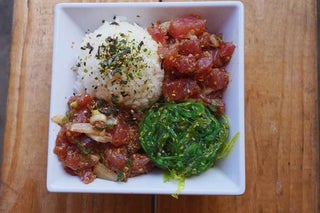 Though it’s not exactly a pre-race dinner spot (unless you’re Hawaiian!), Da Poke Shack should be the first stop after wheels down from the airport. Not only because the fresh raw fish poke is amazing (try the favorite “shack special” featuring a honey miso sauce or the spicy “Pele’s Kiss”), but also because the insane demand during race week often causes them to run out. Go early and go often. Dapokeshack.com

Ruth Astle Is On the Rise