Ironman competitors Phil and Ophelie Saussus of Belgium have an unorthodox race strategy for Saturday: If she can clock a fast swim, she should be able to meet up with her dad at an approximate spot on the bike course. If not, Phil will slow and wait for his 21-year-old daughter—however long that might take—so the two can continue the race, side-by-side, to the finish.

“It could go the other way,” Ophelie laughs. “I might swim really, really fast.” It’s father-daughter love, triathlete style.

“You can’t dream of anything better,” Phil says of this year’s race with his kid. “It’s the cherry on the cake.”

“I just want to have fun,” Ophelie adds, “but doing it with my dad is even better.” 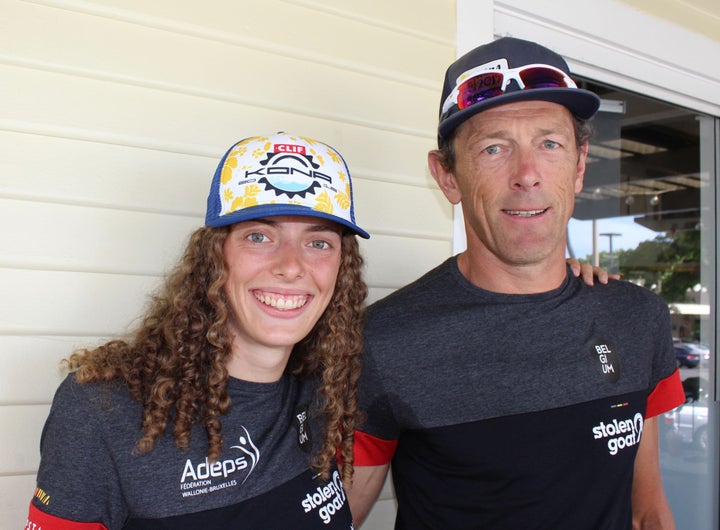 This is 57-year-old Phil’s second Kona Ironman appearance (he finished last year with a respectable 12:09:44), but 2018 marks the first time his daughter Ophelie—the youngest ever Belgian woman to qualify for Kona—will race the Big Island. If they can pull off their hatched plan, it will be a highlight-reel moment.

The father-daughter road to Kona might be described as fortunate and driven. At age 50, Phil wanted to take a yearlong break from his career as a music industry executive to travel the world. A friend steered him toward multisport, and, boom, family fun across the globe got real (that’s the fortunate part).

But Phil and Ophelie still had to qualify individually to make worlds (that’s the drive thing). Yes, good coaches have been tapped, but both parent and kid have trained hard, they’ve stayed committed. Also, Ophelie has managed to balance her university studies and sport—not easy. (She’s planning a career in engineering with a medical emphasis.)

Such success on and off the race course, but the Saussus’s are humble, gracious, polite. Phil says he’s not particularly great at swim, bike, or run. Ophelie is giddy about triathlon yet has no plans to attempt a pro career. “I’m passionate about engineering,” she explains.

“We know our limits. We are not born athletes,” Phil offers.

Then how? Father and daughter have both qualified for what most say is the toughest race ever.

They look at each other. Ophelie grins. Phil shrugs: “We were not born with a Ferrari heart.”