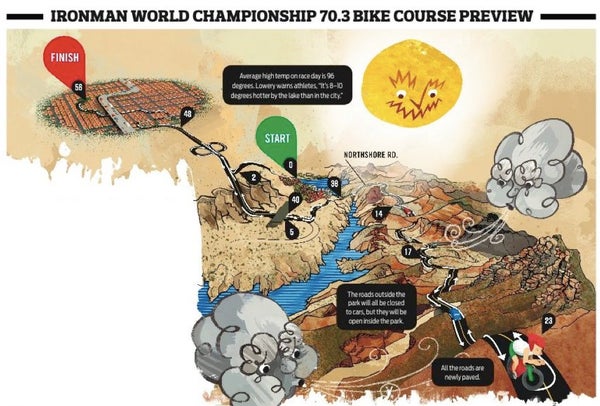 Click here to view the full PDF of the course preview.

After ﬁve years of complaints and criticism surrounding the Ironman World Championship 70.3 course in Clearwater, Fla., the prestigious mid-distance championship has relocated to Lake Las Vegas. Florida’s pancake-ﬂat bike course, which was blamed for creating massive drafting packs, has been replaced with the wind, hills and heat of the desert. The athletes of Team Trek/K-Swiss ventured out to Henderson, Nev., this spring to train on the new course. They and race director Frank Lowery shared their detailed knowledge of the course, and everyone agrees: Be prepared for a tough ride.

Mile 0–2: The climb away from Lake Las Vegas toward Lake Mead Drive lasts almost 2 miles at a steady 3–4 percent grade.

Mile 17: “It’s constant 3- or 4-minute hills on the way out and back as soon as you’re in [Lake Mead State] Park. The longest is leading to the turnaround,” says 2009 Xterra World Championship runner-up Lesley Paterson.

Mile 23: After riding through the turnaround, be prepared to face a headwind. “The wind takes your momentum on the downhills. You have to go as hard downhill as you do up,” says Heather Jackson.

Miles 48–56: The ride into T2 is a gradual, constant climb through the city of Henderson. “It almost looks like a false ﬂat, so it could be easy to get a little disillusioned,” says Paterson. Lowery says it’s a “phantom hill that can make a fool out of you if you’re not careful.” The course gains about 450 feet of altitude from T1 to T2. “The roads in the city are not technical at all. There are very few times to get out of the aerobars,” according to Lowery.

Sarah True Chose Joy Over Winning. She Got Both.