San Diego’s ideal climate and a slightly modified Olympic distance course is sure to attract top professional and amateur athletes from around the world. The course will begin, transition and end at Ski Beach on Vacation Isle, in Mission Bay. The 1.5 km swim will take swimmers along the eastern coastline of Ski Beach in the protected, calm waters of Mission Bay; followed by a 35 km single loop scenic bike ride with challenging hills through Pacific Beach, La Jolla, Clairemont, and back to Mission Bay; and end with a 10 km single loop flat run on the sandy beaches around the perimeter of Sail Bay to finish back on Ski Beach.

“San Diego is known as the birthplace of triathlon dating back to 1974 when the San Diego Track Club held the first ever ‘triathlon’ around Mission Bay,” said James Leitz, Senior Vice President of IMG. “IMG is honored to bring back a major triathlon event to the City of San Diego and the surrounding communities. We have been working very closely with the San Diego Sports Commission and City of San Diego to ensure that this race is not only successful in its inaugural year, but becomes an important annual event on the international triathlon calendar. The launch of the San Diego Triathlon further underscores IMG’s commitment to growing the sport of triathlon on a global scale.”

“Working with a world-class company like IMG to host the all new San Diego Triathlon fits in perfectly with the City of San Diego’s overall campaign to brand the city as an international sports destination,” said san Diego Sports Commission President Alan Kidd. “IMG will successfully attract top professional and amateur athletes from around the world while the City of San Diego provides a picturesque backdrop for this prestigious race.”

The inaugural San Diego Triathlon will take place on Sunday, March 21, 2010, at 7:30 a.m., on Mission Bay, in San Diego, Calif. The public is invited to watch the race and attend the free two-day Fitness Festival & Expo which will take place Saturday March 20 and Sunday March 21. The San Diego Triathlon is owned and produced by IMG with race direction provided, in part, by Premier Event Management. Interested participants are encouraged to register online early as space is limited. For more information visit Sandiegotriathlononline.com or at Twitter.com/SDTriathlon.

See the course below: 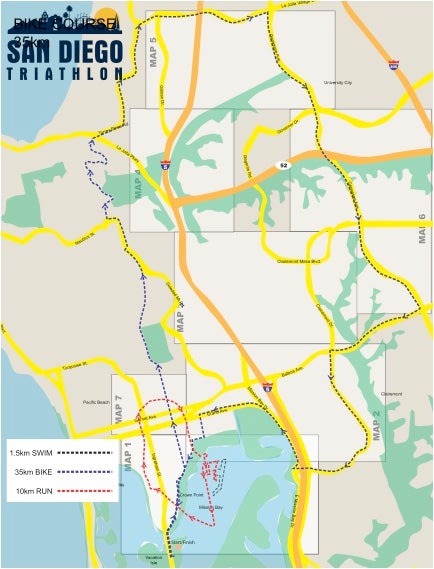 The bike course is a 35km single loop course that takes participants on a scenic ride through northern San Diego. After transitioning on Ski Beach, cyclists ride north through Pacific Beach, up Mt. Soledad into La Jolla where they will turn east and cycle through UTC and south to Clairemont back to Mission Bay.