With pre-registration for the 2012 Abu Dhabi International Triathlon now open, we though we’d look back at this year’s pro race and help give you an idea of what it would be like to race in the United Arab Emirates.

With temperatures rising to 97 degrees, the pro field at the 2011 Abu Dhabi International Triathlon—maybe the best ever assembled outside of Kona—was put through the ultimate test of their endurance. 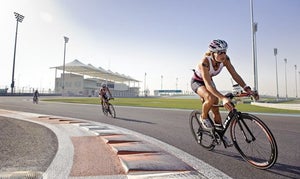 Click here to view a photo gallery of the Abu Dhabi International Triathlon.

A perplexed local stumbled upon the sun-baked Abu Dhabi International Triathlon run course as hundreds of Lycra-clad triathletes raced by. “There may be palm trees and big buildings, but [Abu Dhabi] is still a desert,” he deadpanned. Many of the world’s fittest triathletes learned that fact firsthand as they were pushed to the absolute limit to cover 223 kilometers of the Arabian Desert.

Although the conditions during the inaugural race in 2010 were temperate, this year’s scorching 97-degree weather turned Saadiyat Highway—stretching from the center of Abu Dhabi to the Yas Marina Circuit Formula 1 track—into a pressure cooker and earned the race a reputation as one of the ultimate endurance tests in all of triathlon. Racers faced a 3K swim, a 200K bike and a 20K run through the Arabian Desert. Only 37 of the 58 professional triathletes made it to the finish.

Champions Frederik Van Lierde and Julie Dibens managed the 97-degree temperatures better than anyone else and walked home with $50,000 each, but racing triathlon in the United Arab Emirates is an experience beyond simply crossing the finish line.

The city’s structures alone are worth the trip, but triathletes came to the Middle East from all parts of the globe to race. About 1,500 athletes walked into the water to start the race in the shadow of the Emirates Palace, a $3 billion hotel that has 1,002 Swarovski crystal chandeliers hanging from its ceilings.

After exiting the swim, the bike course heads for the city skyline along the coast of the Arabian Gulf. Even before leaving the city, the race claimed its first victim as pre-race favorite Rasmus Henning dropped out due to cramping. (It took hours until his muscles starting functioning normally again.) The course then rises over the city’s outskirts to reveal a forest of high-rise cranes pushing the city limits up and out on all sides. The swim divided the men’s race into two big packs that coalesced on the bike, separated by about 2:30. Both packs contained at least one Ironman world champion. Bryan Rhodes made the first group and thought that the lead might allow his pack to “hold the chasers at bay” until the start of the run.

After passing the cranes, the course enters sparse desert. Paved road and street lamps are the only signs of civilization for miles. Once the athletes made it to this desolate part of the course, racers started taking fliers off the front of the two groups of cyclists. Paul Matthews, a two-time 70.3 winner, fired to the front and pulled the lead group while Ironman champ Ben Hoffman dragged the chase group toward the leaders. As the rest of the contenders carefully metered their energy, Swedish bike specialist Bjorn Andersson pedaled to the front of the group and hit the gas. After the race, current Ironman World Champion Chris McCormack said, “Bjorn went absolutely bananas,” as the Swede ripped away from the favorites to earn a seven-minute lead by the 75-mile mark. Andersson, who currently rides for Scott Bicycles, was without support from a bike company during the race, so he rode a Hotta—a fiberglass aero bike that was built in the last century.

Down the road a few minutes, the lead pack was stalling out. “The first group included a lot of the good guys, but no one wanted to force the pace because we were of similar ability,” said Rhodes. As Andersson built his lead, the two big packs merged and most of the favorites were riding together. Andrew Starykowicz peeled off the front of the group to close the gap to Andersson.

On the second lap, Andersson led the race through the Yas Marina Circuit, an F1 racetrack built around a fully functional marina and hotel. The long course makes two full laps around this breathtaking racetrack—pros, amateurs and media were all giddy after riding the same course as the world’s most advanced race machines.

Although Starykowicz never quite caught Andersson, the Swede eventually succumbed to the heat and dropped out before the run. Starykowicz assumed the lead as some of the athletes in the big group started to wither. McCormack decided to drop out and rode inland off the course to avoid the crowds and the inevitable questions about why he didn’t finish, pedaling straight back to the Khalidiya Palace Rayhaan hotel where he was staying.

While Starykowicz tried to ride away from the men, Julie Dibens had already established a substantial lead over second place in the women’s race, occupied by Caroline Steffen. Dibens won the inaugural Abu Dhabi International, so she was familiar with the unique challenges of the 200K ride. “Even though it’s only 20K more than the Ironman distance, it seems exponentially worse as the race gets longer,” she said. “If you talk to most athletes that raced, the last 40K was pretty tough for everyone. Because of this, there is nowhere to hide, and the stronger riders can really open up a gap before the run.” Dibens did exactly that, and started the run with a lead of 8:28 over Steffen.

The heat really started to grind on the pros once they were off the bike. “You got a lot hotter [on the bike] but you didn’t realize it because of the wind,” said Rhodes. “You didn’t know how hot your body had gotten until you jumped off the bike. It made a big effect on the run.” Like Dibens, Starykowicz also took a substantial lead into T2, but he was unable to keep his body cool, and eventually finished 10th before collapsing.

A group of four runners separated from the rest of the field. Frederik Van Lierde, Dirk Bockel, Marino Vanhoenacker and Raynard Tissink emerged from the desert fresher than anyone else and ran along the Corniche, Abu Dhabi’s scenic Gulf-side pathway and park, as a tight group. These four traded blows throughout the run along the turquoise-blue water, but no one was able to match Van Lierde’s final move. He won the race, but only 33 seconds separated the top four.

With Steffen and company far behind, Dibens started the run with the goal of surviving the heat. At that point, “anyone who hadn’t taken care of hydration and nutrition early in the race started suffering,” said Dibens. “I was already having some stomach issues, so I had been forced to slow down, which might have been a good thing in hindsight.” She used this steady pace to earn a five-minute-plus victory. Dibens said she never actually overheated, but those behind her seemed to struggle more. Sixth-place finisher Leanda Cave had “some gut issues related to heat exhaustion, but [they were only] on the second half of the run, even though I did everything possible to stay cool,” she said. “There were plenty of opportunities to take on liquid and fuel on the course.” After having their finisher’s medals presented by a sheikh, some of the dazed pros stuck around to welcome the age-groupers who had just earned the same, hard-fought finish.

In the cab back to the Khalidiya Palace Rayhaan hotel following the race, the driver wanted to know where all these people were riding their bikes. When he heard the route, he started bouncing in his seat, yelling, “Yas Marina, Yas Marina?” and laughing incredulously. The locals knew it beforehand and the out-of-town racers learn after the 200K bike—12 miles longer than an Ironman ride—and 20K run: Racing through the Arabian Desert is laughably difficult, even for the most hardened endurance athletes. By the time I arrived at the hotel, several of the athletes who DNF’ed were already showered. If you fancy yourself a tough triathlete and want a race so challenging that it forced 12 Ironman winners to drop out, Abu Dhabi will test your mettle. Afterward, the emirate’s opulent accommodations can pamper you back to full strength before you return home.

Abu Dhabi is known as an oasis in the middle of a desert, but the landscape outside the city limits bares no resemblance to the saguaro-spotted parks of the American Southwest. Endless sand dunes surround the city. Small rectangular buildings sprout from the unforgiving terrain. Construction insulates Abu Dhabi from the sand and wind, but fine, barely perceptible dust floats through the city and creates a strangely beautiful haze, especially at night. LED street lights that line the immaculate roads have a glowing halo.

In stark contrast to the Arabian Desert, the grandeur of attractions such as the Grand Mosque, Emirates Palace and Ferrari World live up to Abu Dhabi’s lofty reputation for lavishness. Imagine the ornate décor of a Las Vegas hotel, except the attractions in Abu Dhabi don’t feel like they are a façade. The opulence is real and the buildings are palatial. Those sights are breathtaking, but many of the pros that toured the city after the race were most interested in the smaller-scale local cultural attractions. Bryan Rhodes was most affected by the Abu Dhabi Falcon Hospital. Dirk Bockel stayed an entire week to “enjoy the scenery” after the race. He went to the desert and rode a camel, and refilled his tank with elaborate brunches.