Ironman France, which will take place June 26, 2011, truly is a microcosm of life. It’s both brutal and beautiful, with a history dating back to the early days of triathlon.

In the 1980s and ’90s, Nice was home to the other biggest race in the world, the ITU Long Course, which Mark Allen dominated for a decade. It took Georg Hochegger of Triangle, a well-known triathlon organizer, and Yves Cordier, Mark Allen’s former nemesis on these grounds, about five years to make Ironman a reality, essentially lengthening the ITU course.

The swim start is on the world-famous galets—hard, round pebbles worn smooth by the Mediterranean Sea. Viewing the course from the shoreline is somewhat confusing because of the buoy lineup. The easiest thing to do is swim out toward the very farthest buoys you see and you’ll be heading in the correct direction.

Transitions are as French as they come as there is no real separation between the women’s and men’s changing tent areas. So if you fully change your attire from one discipline to the next, make sure you’re comfortable changing in front of the opposite sex. 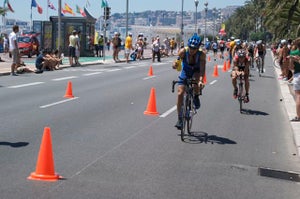 The bike course is really what makes this race special. There are only two Ironman courses on sacred cycling ground, and this race has one of them. The course is flat for the first and last 20 kilometers with a veritable rollercoaster of climbing and descending embedded in the middle. The course takes riders through the ancient village Gattières, which dates back to the 13th century. The 21 km climb to Plateau de Caussols is as beautiful as it is hard. Once on the plateau, the climbing isn’t over and neither are the ripping descents. The snakelike descent into Carros is a ride straight out of a movie. On a windy day, this course rivals Lanzarote for the most challenging. The run is along the Promenade des Anglais, and it is packed with both athletes and spectators. There are no hills, no frills and no shady spots.

Getting to Nice is easy. Nice Côte d’Azur Airport is a few kilometers from the city (just look at the run turnaround on the race course map) and is stocked with public transport.

If you plan to travel by train, the TGV (France’s high-speed rail service) offers daily express service from Paris. If you choose to take the rail system, non-EU passport holders may purchase many different types of rail passes that include travel on multiple dates or to multiple countries. Depending on your travel plans before and after the event, going by train may be a wonderful option. Renting a vehicle in Nice is generally a bad idea. The public transportation system is fabulous, so there is no need to deal with the horrendous parking and terrible drivers.

Officially the French Republic, France is the third largest country in Europe and has kept its borders essentially the same since the Gaul Empire, dating to 2,500-50 B.C. Julius Caesar conquered the Gauls in the first century B.C., bringing with him the Latin language and Christianity. Wine, France’s most famous export, dates back to the sixth century B.C., when Greek settlers colonized the south. The rich culture of France survived and continued to flourish through the Crusades, plagues, revolutions and world wars.

In fact, the history of Nice is still being uncovered today. The first indisputable evidence of fire domestication 500,000 years ago was discovered at the fossil beach of the Terra Amata archaeological site. Nice is the capital of the French Riviera and the fifth largest city in France. The city is part of the larger region known as Provence-Alpes-Côte d’Azur and was once under Sardinian rule.

The problem with the Côte d’Azur is, well, there isn’t one. There is absolutely no way to take it all in during 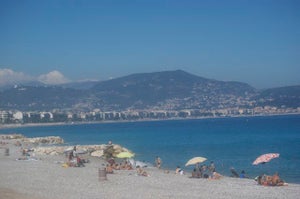 just one visit. Bike touring in and around Nice is a must. Athletes often get so caught up in the race mentality, they forget that riding is a ton of fun and a fabulous way to see the countryside. The trains offer an excellent opportunity to do one-way rides. A spectacular one-day ride with plenty of stopping time is the one-hour train ride to San Remo, where cyclists can try their hand at the famous Poggio climb before simply following the coastline back to Nice through Ventimiglia, Menton, Monaco Cap-d’Ail and Beaulieu-sur-Mer.

If visiting eclectic shops, sunbathing and snorkeling in tranquil crystal blue water sound more like your speed, then take the bus to Saint Jean Cap Ferrat. After relaxing and recuperating, head to Antibes, 20 km in the other direction, which is known for its nightlife and the 16th-century Fort Carré. No tourism is complete without spending a full day walking the streets of Old Town and up to the observatory or sitting at a sidewalk café on Rue Masséna with a giant bowl of freshly steamed mussels.

Dean Warhaft has been racing and traveling for more than 15 years. He has raced on six continents, completing more than 30 Ironmans, more than 30 marathons and countless other endurance events along the way. He produces the “Endurance Traveler” TV series.

Ask A Gear Guru: How Much Slower Are Clip On Aero Bars?