With the Audi Best Buddies running and cycling fund-raiser to take place at Hearst Castle on September 10, we look back at Triathlete Magazine’s report on one of the most star-powered and innovative charity/endurance events in the world. 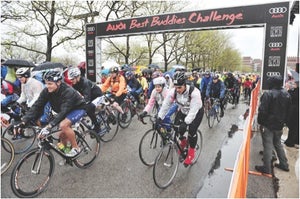 On the weekend of September 10, runners, cyclists and triathletes will participate in a Audi “Best Buddies” fund-raising event held near and around the Hearst Castle, in San Simeon, Calif. Best Buddies is a non-profit organization and volunteer movement that “creates opportunities for one-to-one friendships, integrated employment and leadership development for people with intellectual and developmental disabilities.” This September fundraisers will be participating in either a coastal bike ride (15 miles, 30, 62 or 100 mile options) or a running race (3k or 5k) followed by a barbecue at the Hearst Ranch.

In 2008, T.J. Murphy, then the editor-in-chief of Triathlete Magazine, participated in the spring edition of the Audi Best Buddies bike ride, held in Hyannis Port, Mass., and filed the following look into one the most unique and successful charity-integrated endurance events in the world.

How a charity bike ride and party featuring celebrities, a clambake and the B-52s help support an international charity called Best Buddies.

There’s also the kind of bike ride I did with 900 others last May—the Best Buddies, which is a bike ride that exists on a whole different level. Held near Boston, the Ninth Annual Audi Best Buddies Hyannis Port Challenge offered rider-fundraisers the choice between a 20-mile ride or a full century. The century riders woke early and rode from Boston, and the 20-milers started in Sandwich, each riding through winding country roads to an elaborate finish area at Craigsville beach near the famous Kennedy Compound.

The event, exists due to the charity work of the Kennedys. Through his understanding of and passion for the effects and obstacles that a person faces when he or she is mentally impaired, Anthony Shriver created best Buddies in 1989. “My family has been a profound source of inspiration, particularly my mother, Eunice Kennedy Shriver, with her early commitment to persons with intellectual disabilities, and my late aunt, Rosemary Kennedy, who was intellectually disabled herself,” Anthony Shriver said. “Rosemary helped me appreciate that everyone is capable of something exceptional, especially with the support and encouragement of friends and family. In Rosemary’s case, she swam better than anyone else in my family.”

Growing up, Shriver realized his aunt was a strong swimmer, an enlightening observation contrasting deeply with the difficulties he witnessed. Unable to perform many of the basic functions of normal life—driving a car, having a job or simply going to bed—Rosemary Shriver felt free of her intellectual restraints and actually excelled in the pool. Shriver’s conception of Best Buddies, both a charity that supports the intellectually challenged and a network that enables friendships in a spirit similar to Big Brothers, was based on this experience.

“I started Best Buddies when I was a student at Georgetown, and amazingly it took on a life of its own,” Shriver remarked. “We now have more than 1,400 chapters in 40 countries and hope to expand to 50 countries and impact 500,000 people worldwide by 2010. Through it all, the mission of Best Buddies has remained the same: to enhance the lives of people with intellectual disabilities through one-to-one friendships. We’ve simply expanded its scope as our organization has grown during the past 20 years. For example, Best Buddies now has a Jobs program, which provides opportunities for integrated employment to people with intellectual disabilities, helping them become further independent through vocation.” Shriver added that one-on-one friendships supplement this independence.

Three criteria define an intellectual disability: a childhood condition, an IQ below 75 points and limited “adaptive” skills, such as the ability to support oneself, maintain a job and effectively communicate with others. Intellectual disabilities affect an estimated 6.2 to 7.5 million people, as reported in the 1990 census. Worldwide, the number is closer to 200 million. Several hundred causes of intellectual disabilities are known. The primary three are Down Syndrome, Fetal Alcohol Syndrome and Fragile X.

An inherited condition, Fragile X is the most common cause of mental impairment and the most common cause of autism. The severity of the condition can vary. Nearly 90 percent of all cases are considered mild, while the remaining 10 percent involve severe challenges to basic functionality. Early intervention, support and education offer considerable hope to those who are more severely afflicted, enabling them the opportunity to pursue a satisfying life.

At Craigsville Beach after the bike ride, the Best Buddies—intellectually challenged men, women and kids—competed in a variety of bike criteriums, including races on tandem bikes teamed with celebrities, such as New England Patriot football players Matt Light, Stephen Neal, Dan Koppen and Nick Kaczur; track superstar Carl Lewis; and Miss USA. New England Patriot quarterback Tom Brady assumed the role of race announcer as the Buddies roared around the track, jarring any preconceptions a person might harbor about the limitations and lifestyle of the intellectually challenged

Across the road under a tent that could cover a small town, official sponsor Audi hosted the post-event party that included a clambake feast, open bars at either end of the venue, a gym-sized dance floor, and entertainment by a band composed of Buddies and 80’s rock icons, the B-52s. Automaker Audi not only sponsored the party but also paid for everything else, channeling fund-raising dollars directly to the cause. “Because Audi pays for all of the expenses, one hundred percent of the contributions goes to the charity,” Shriver said.

Seattle-resident Eric Matthes—his buddy is Carl Lewis, who has supported the program for 16 years—is a spokesman for Best Buddies. He gave two speeches over the weekend, each with deliberate phrases and emphatic body language. “I am a self-advocate,” he said. “I choose to come here and celebrate friendship.” He told his story, recollecting the moment in kindergarten when he was first called retarded and made aware of the false division society had relegated him. An emotional, electrical charge poured from his speech to the audience, many of whom were intellectually challenged or family members of intellectually challenged persons. “I am not my disability,” Matthes declared, and turned to speak directly to the Buddies. “There is nothing stopping you from living your dreams.”

Despite the large numbers, the award festivities had the distinct vibe of a family reunion, and Anthony Shriver, both a cheerleader and tireless stage director, avoided all forms of corporate-stylized speech as he moved the show along. “I truly believe that through the simple act of friendship, society possesses a powerful force that can dramatically enhance the lives of people with intellectual disabilities,” Shriver said. “And volunteers equally experiences the gifts from such one-to-one friendships.”

To join the bike ride, participants must raise a minimum amount of dollars. The next Challenge takes place at Hearst Castle in California on September 6. Three rides are on the ticket: 15 miles, 100k or 100 miles. The early-bird minimum fund-raising amount is $1700, which warrants a jersey, gift bag, tour of Hearst Castle and admission to the BBQ and concert at the Hearst Ranch. Who’s playing? The Black-Eyed Peas. Raise $3,500 and an invite to a VIP cocktail party hosted by Maria Shriver, Anthony’s sister and the First Lady of California, is included. Raise $10,000 or more and there’s also a Friday night VIP affair at the castle, also with Maria Shriver, plus a VIP dessert and dance after the concert.

At the Craigsville Beach party, notable fundraisers got their picture taken with Tom Brady. Anthony Shriver managed everything, even making sure award winners were careful ascending the stage. “Steps, steps, steps,” he pointed out to one eager fundraiser. Brady took over duties and directed a unique form of the two-minute drill, drumming up more than $20,000 in contributions from the crowd that would pay for Buddies to go to a summer leadership camp. A $1,000-contribution paid all the expenses for one Buddy. After raising more than $20,000, Brady matched it out of his own wallet and brought the total to $50,000.

Brady is deeply involved in several charity organizations, one of which is Best Buddies. Once Brady took an eight-day trip to Africa—Uganda and Ghana, in particular, organized by Debt AIDS Trade Africa—and said it had a profound effect on him. “It gave me perspective,” Brady said. “At the end of the day, what I do for a living is toss a football.” Supporting charities “is something I get a lot out from personally. It improves my life.” In addition to pulling duty during the Challenge weekend, Brady is involved in the friendship network part of the program. His Buddy is Katie Meade from Iowa, and the two have been friends for several years.

“We can help these individuals be seen, heard and hired,” Shriver said, adding emphatically that the friendship program is invaluable to everyone involved, setting off a chain reaction. “Students who participate in Best Buddies become adults who raise children with a new perspective on intellectual disabilities, based on compassion and integration. They become employers who understand the undeniable value of hiring people with intellectual disabilities, who have proven to be loyal, committed and capable. But, Eric’s words sum it up best: ‘I want to show the world that even though I have a disability, I can do anything I put my mind to.’”

The entry form to the Audi Best Buddies Challenge at Hearst Castle promises more than just a bike ride and party. By becoming involved, you can create a smile, give someone the gift of friendship and make a difference.

For more information on Best Buddies and future Challenge events, go to Bestbuddies.org.

What to Wear for Bike Rides, by Temperature