Four writers give us a glimpse inside their minds.

The writing process is the worst thing for one’s confidence—there’s always something to revise or tweak, and nothing is ever good enough. Kafka didn’t want any of his books published; Hemingway was convinced everything he wrote was crap. I’m convinced this self-loathing is why you don’t see too many writers in triathlon: If you think we’re hard on ourselves when we’re sitting at a manuscript, you should hear the things we say to ourselves in a competitive setting.

I know I should be nicer to myself—in writing and in racing—and yet I’m not. I’ve crossed dozens of finish lines in my career, and yet every time the starting gun goes off, there’s that voice in my head that tells me that I suck. Things I would never say to another human being become perfectly acceptable to say to myself.

That’s exactly why I do triathlon—not because of I’m a glutton for punishment, but because I need to prove myself wrong, often and spectacularly. Because the truth is this: I can be kind of awesome sometimes. One of these days, maybe I’ll even let myself believe it. 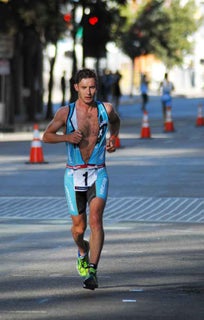 I Did That, I Can Do This

When I was a sophomore in high school, my dad passed away from non-Hodgkins lymphoma. It was mid-summer when it happened, less than a week before Father’s Day, and as a cross-country runner who was training for the next season, I had already planned to run the local Father’s Day 5k.

Everybody told me to let the race go. I hadn’t trained in over a week, and I was so exhausted from grief that I had barely eaten in days. But still, I remember telling myself, very specifically, that if I could wake up the next morning and race this elegiac Father’s Day event, then I could probably do anything.

I did the race, and it was awful. I went by myself, and it felt like the toughest, loneliest 20-plus minutes of my life—and yet I proved that I could do the damn thing, all on my own.

Voices In My Head 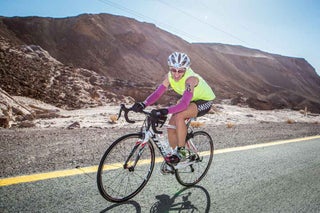 OMG cold the water is freaking cold! Cold cold cold! Just chill. Just chill. Chill is cold. The water is cold. COLD! OK I’m fine. It’s fine. Go go go! Outta my way! Can I hold this pace? I can hold this pace. Oh balls the buoy’s over there. Just chill. Keep going. MOVE old men! Ahh someone’s touching my foot. Kick kick kick harder. Much better. This whole lake and those two guys are blocking my line? Blast through! Right shoulder ache, readjust. Pull water. Good form. There you go. Ready to be done swimming. Almost there! Swim ‘till your fingers touch the bottom. OK RUN! T1 T1 T1. Helmet, glasses, shoes, go go go! Riding, riding. I love my bike. Breastfeeding and baby-carrying gave me a killer power-to-weight ratio. Crush it! DANG IT, dropped my chain. Stupid flimsy front derailleur. Back in the game. I’ll catch the guys who went out too hard. Long day. Just chill. Enjoy. Eat something. Gel to start, some caffeine. Mmmm vanilla. What flavor sports drink on this course? Orange? Bleh. OK fine. Push it a little now, you got this. Make the pass. Pick ‘em off. Good, good. OK over biking now. Sore parts. Want to run. Dismount line! RUN! Run shoes, visor, gels, GO! Come on legs, you got this. What’s that calf say? 35? Not your age group! Still doing awesome. Less than five miles to go. Less than four. You can walk when you’re done.—Hi baby! Kissies, kissies, kissies, I love you!—Keep going, keep going. The faster you finish, the sooner you get more kissies. I miss my baby. Run, run, run! Ooo the finish line! Pick it up! Gun it! Hands in the air! Kissies! Food. Blackness. Eyes open. I could’ve gone faster.

Letters from the Road

To my fifth-grade gym teacher: I know you didn’t expect me, a slightly chubby blond girl, to run the mile that quickly. But I did. “You’re not that good of an athlete,” you said. But I was. Even if I silently cried my way around the soccer field.

To the cashier who stared in horror at my cart full of cookies: It was a peak week. I’d ridden 100 miles and run five more that morning. Kick rocks.

To the math teacher who tutored me at lunch: I’ve aced hundreds of fractions over the past nine hours, mentally calculating how far into the race I am. I think about you each time I work an equation out.

To the volunteers, all of you: I love every single one of you, even if our only interaction is me hysterically yelling, “Where are the pickles?” If you’re working the finish line I may kiss you. Like, full on the mouth kiss, pickle breath and all. Thank you for everything—especially you, Mr. Vaseline Stick Holder.