Stacy DeLeon is using triathlon to advocate for her son—and everyone with Down syndrome.

With miles to go during the run portion of Ironman Wisconsin 70.3 last June, Stacy DeLeon was beginning to hit the wall. But then, she locked eyes on her son, Marcus, wildly cheering and jumping up and down. As she approached, Marcus began running with her. He only kept her pace for a few meters, but it was just enough time to shift DeLeon’s mindset and get her to the nish line.

That, DeLeon says, was one of her favorite moments ever. Not just because of Marcus’s unbridled enthusiasm, but because of what it symbolized. After all, Marcus is her motivation—the “why” that keeps her churning for mile after mile. In return, Marcus remains her steadfast supporter, and her number one fan.

Marcus, the third of DeLeon’s four children was born 15 years ago with Down syndrome—In many ways, Marcus is a typical teen: He’s the manager of his high school’s basketball team, loves gol ng, and relentlessly needles his sisters. His affable personality has made him a favorite in their small town of Spring Grove, Illinois, and he’s recognized everywhere he goes. And, like many kids his age, Marcus has hopes and dreams for the future.

“He has a desire to have a job one day, maybe work with his dad,” DeLeon says. “He wants to live a life with purpose and meaning.”

It’s a son’s simple hope that DeLeon is intent on seeing through. As part of the National Down Syndrome Society (NDSS) athlete ambassador team, DeLeon uses triathlon as her platform to advocate for those with the condition, which effects about one in every 700 babies born in the United States each year and carries the risk of continued medical complications for life. Last year, DeLeon not only raised $10,000 for NDSS, but she took her cause to Capitol Hill when she and a team from NDSS successfully lobbied for the ABLE to Work Act, continuing the momentum towards giving those with disabilities fair wage and better savings options. 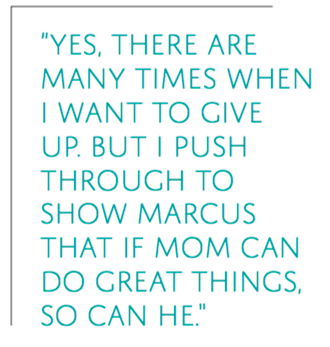 “My desire is to show the world the beauty of Down syndrome and to give my son the same opportunities in life as my daughters,” DeLeon says. “I want to make life better for my son, as well as my friends and other people with Down syndrome, and their families.”

This year, with the goal of raising another $10,000 for NDSS, DeLeon plans on racing two Ironmans and two 70.3 events. No doubt, Marcus will be there, waiting for her at each nish line.

“I want him to dream big and to aim for the impossible,” DeLeon says. “Yes, there are many times when I want to give up. But I push through to show Marcus that if mom can do great things, so can he.”

Hotter, Harder, And More Expensive: Why Triathletes Should Care About Climate Change

Who Ya Got? Triathlon Fantasy Matchup #1

The Science and Controversy of Running Blade Prosthetics

Vote: Help Us Pick Our Next Cover Star