This is blog number four I think of 8 or so in my leadup to Kona if you want to check the others including Why Kona, my primary training strategies, 70.3 Worlds, and nutrition, hydration, check out the Triathlife page HERE!

I’m on a plane to Augusta 70.3, with less than four weeks to go to Kona! Things are getting HOT, figuratively and literally. I just checked the weather and it’s 94 degrees, with a “Feels Like” 105! Oh dang.

So yep, I’m racing Augusta on Sunday. It’s three weeks from Kona. A lot of people have asked me why I’m racing so close. The reasons are: 1) I *think* it actually keeps me from overtraining/burying myself with IM workouts, hopefully leaving me fresher, and 2) this is what I did before my best IM to date (Wildflower 2016 was three weeks before IM Lanzarote that year plus I had to fly across the world) so why not do it again. As an unintended but very real benefit, it will be great for me just to go spend 4-5 days in the heat—plus an awesome workout/race—while it’s turned to cold and rainy in Bend. In all likelihood, this will be my only outdoor workout until I actually arrive in Kona!

As far as preview of the race, I don’t actually know that much. It’s my first time racing Augusta and I’ll arrive late on Thursday so won’t have much time to see the course. From what I’ve heard it’s:

So overall, good practice for Kona! Of the guys listed on the startlist, the top couple are actually competitors of mine at Kona—Andy Potts and Matt Russell—so the idea of doing this race can’t be that crazy! We’ll see how it goes. I’m planning on racing hard, obviously, but also within the context of knowing that Kona is top priority in three weeks.

This week I’m talking about what I consider my primary or key Ironman workouts. There’s obviously a lot more to my training and the planning by my coach Matt Dixon than just these workouts, but these are the few that I feel best prep me for Kona:
1. Swim: 10×300
2. Bike (ish): Back to Back Brick Days
3. Run: Double Run Day
4. Heat: Low Intensity Hot Trainer Sessions

I’ll describe each workout below and at least the intended, and my perceived, benefit of each one. You’ll see below the following patterns:

1. Each workout is meant to simulate at least some aspect of IM racing—this shouldn’t be a surprise.
2. Many of my bigger workouts are “split” or actually two workouts either in the same day or on back to back days. This is because coach Matt and I believe it…
– leads to less burnout
– allows me to recover better from the combined sessions (as opposed to one monster session)
– fits better in my daily schedule of having other stuff to do each day—a 7 hour ride with 1 hour run is super duper tough with kids/work/family.
– leaves me less prone to injury –particularly on the run. I never do more than 13 miles in a session, but I will run up to 20 on a day split between two runs.
3. This isn’t quite what a lot of my competitors do, but it is what it is. Everyone has their own stuff that works or doesn’t!

The set is NOT as simple as it sounds, but it’s effective. You leave on the same interval – for me 4:45-5:00 send off short course meters usually. But the pace of each interval varies and goes like this:

So basically you go: hard, hard, easy, moderate, moderate, hard, easy, moderate, hard, hard. It adds up to 3K, obviously, and is a good race simulation in that you have a super strong effort right off the gate, are forced to recover a bit while still swimming at a decent pace, then have mid race moves around buoys or groups, recover again, and then finish strong. To me it’s like almost every triathlon swim I’ve ever done.

Back to Back Brick

The basics of this workout—actually four workouts over two days—are:

This workout is basically a really big Ironman simulation workout, but broken up over two days. Usually I swim on one of the days also. I did this one or something similar about four times this summer and it was a real barn burner. The first day is tough on the bike, and smooth (but still tiring) on the run. Then the next day your legs are just tired the whole ride, so even holding endurance pace is difficult mentally and physically (a lot like an Ironman!). Then that last run is just a kick in the balls—but also forces me to run fast with good form while very tired.

Overall it’s 6.5-7hrs of riding and 70-90 minutes of high quality running. Like I said above, we think this broken up strategy keeps me from getting too buried from a single workout (I’d usually be very tired from these sessions, but ready to go again in another 3 days or so), and also less likely to get hurt—never really doing anything over 4 hours on the bike and 50 minutes of running. It also allows me to get in two big days in my normal “work hours” without being completely gone from family and office.

The double run day is almost exactly like the back-to-back brick, just focused on run. I have a lot of miles in my legs and have had my fair share of injuries, including a stress fracture in 2013 that cost me a year of racing. So Matt and I play it safe on the run side. I max out around 40 miles a week during my IM training (average 20-30), and never run more than 13 miles during a single run (basically my half-Ironman races are my longest runs before my Ironmans). In order to get that IM simulation of deep fatigue in my running system, while minimizing the risk of injury, we break up my big run days. They usually look like this:

So on that day, I got in 19 miles at an average pace of under 6:30/mile. A pretty good IM simulation, but without actually doing 19 miles and risk breaking myself in the process. 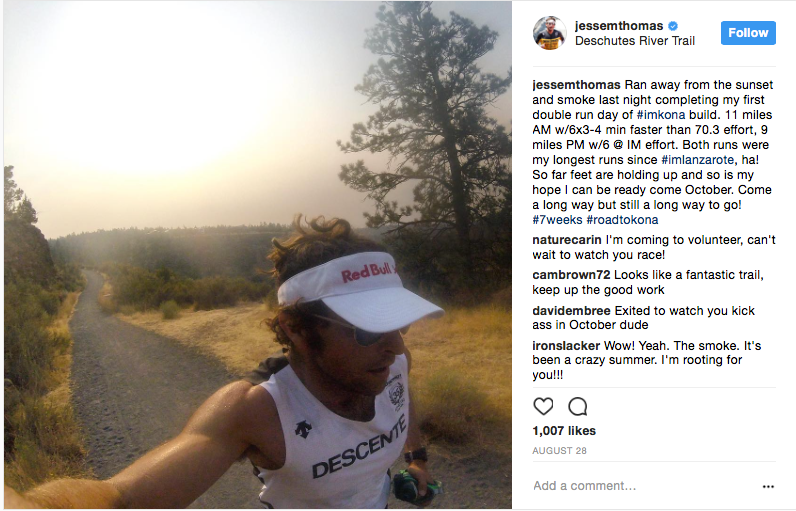 I spoke about this at length in the Facebook Live video posted above, but the primary way I try to acclimate for the heat while staying in the cold in Bend is through indoor workouts and hot low intensity trainer sessions. I’ll end up doing most of my workouts inside in the last few weeks, but I don’t “overheat” the workouts that require high intensity and effort. As my coach Matt says, this “blunts the sword,” (a very British way to put it). That keeps you from being able to hit the intensity you desire and get the most out of the workout. So I actually do 3-4 low intensity trainer sessions for 1 hr in high heat with no fan (80+ degrees, 80+% humidity). It gets very sweaty indeed. But I do feel an acclimation happening—honestly I get cold as crap when I go outside after my body has started to acclimatize. Anyway, that’s the main thing I do for heat stuff!

In case you missed it and you want a general overview of some of my strategies, thoughts, and advice for Kona, check out the recent Facebook Live Q&A I did with Matt. We went over nutrition/hydration practices, cooling methods, training & tapering, equipment, the course and mental prep, and other stuff. Believe it or not, It’s worth it to listen, IMHO, despite the bad jokes and ugly mugs.

That’s it for now guys! I’ll see you on the other side of the race this week and will catch up again on Facebook Live and answer questions about the race, as well as go over some equipment changes I’m going to try to make to help deal with the heat at Kona! If you have any questions as usually hit me up on Facebook, Instagram, Twitter, or Strava! Thanks as always to my sponsors for the support and to Triathlete magazine for having me. See y’all later!

Triathlife: So Long And Thanks For Everything

Rudy Von Berg: The Young Pro Is Blazing His Own Path