Sometimes you win, sometimes you lose. Actually, the truth is—mostly you lose, but every once in awhile, if you stay at it for a long long time, you just might win. And when you do… it’s awesome! And you should celebrate with you’re literally DOZENS of crazy ass fans! Hooray!

It’s no secret I was fairly disappointed with my race at 70.3 Worlds two weeks ago. But I’ve experienced this sequence a few times now in my career—have a solid training block leading into a big race, underperform at the race, bounce back two weeks later and BAM, get performance you hoped for! It’s a scary two weeks that gets you down/shocks your confidence (as my last two weeks have been), but you have to believe in the plan and in the training. It’s tough to nail tapering/timing for races, particularly coming off of big training blocks, and this just goes to show me—and hopefully some of you—that sometimes after a disappointing race, a better one might be right around the corner. “Back on the horse” as they say somewhere they ride horses.

Coach Matt and my plan for this weekend was to swim hard and ride hard, and depending on where I was in the race, run managed so I didn’t bury myself for Kona. But… if you have a chance for the win, you go for a win! And luckily for me, the race played out that way. 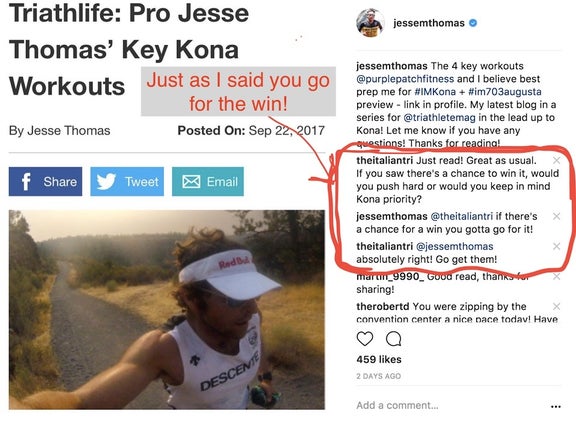 You go for the win! Also I’m awesome at photo editing.

We started about 5 minutes late, which gave me 5 extra minutes to cool down in the river water before what was sure to be hot hot day. As the gun went off it was very typical washing machine style blitz of elbows and ankles. It stayed pretty packed for about 400 meters and then started to thin out as the fast guys did their fast guy swimming stuff. I was third in our second pack cluster for awhile, then eventually second, and passed our leader just near the last buoy. There is not much to report besides that, I just remember counting over and over again to 100 trying to keep myself from getting bored. It wasn’t too hard, wasn’t easy, but I felt fairly relaxed, and the current took care of the rest!

Bike: Finally Some Signs of Life!

Two weeks ago, I struggled on the bike and the alarms started blaring in my head. I had trouble holding above 300 watts (I usually average about 310 for a half Ironman), and ended up averaging below 280, my lowest half Ironman effort in years! So it was a pleasant surprise to feel my legs come around quickly and see 320-340 feel hard but sustainable as I followed Matt Russell, who was on a tear, for the first 30 minutes. We made up our 90-second gap on the leaders by about mile 15. Then both of us recovered a bit and sat on the back of the group of seven for another 15 miles. The pace was surgy, but pretty manageable. I felt like everyone in the group did a good job of giving plenty of space and not pushing the drafting limit.

I had an opportunity the day before (via a one-way Uber) to ride the last 25 miles of the course. So I knew there were some short but steep/pitchy sections around mile 30 and that if I was in a group and felt good, that would be the place to take a crack at breaking it up. With “ride hard” in the plan as I mentioned, and feeling okay coming into that section, I decided to give it a go.

And pleasantly (though it certainly wasn’t pleasant), the legs responded. I put in a 5-minute surge averaging about 390 watts (for those of you who don’t speak watts, 390 is somewhere between “Goodness Me!” and “Really Wide Eyes” hard). Then sustained that push through some big rollers for another 15 minutes, averaging around 350 watts (aka “Horse Noises” hard) for about 20 minutes. As we came into the last corner before a long stretch, Matt was the only guy left behind me. I was feeling a bit smoked, so I mistakenly asked Matt if he wanted to take a pull, and he promptly came behind me and dropped me like a toddler cup full of milk that you didn’t quite put the lid on all the way. I tried for about 3 to 5 minutes to stay with him, but it felt way too hard, so I backed off and rode what I thought was the appropriate pace for me. It was honestly good practice for the Kona pacing stuff I talked about a few weeks ago—using people when it makes sense, and not using them when it doesn’t! Too fast, Matt, too fast!

Run: Focus on Yourself, Bro!

I came into T2 about 40 seconds down, knowing I’d have my work cut out for me as Matt is one of the stronger runners in the sport. But I settled into what felt like a solid, manageable pace, and surprisingly caught him by about mile 2. From there it was about 11 miles of trying my hardest to “stay internal” and I don’t mean in a poopoo and/or peepee way, my stomach/gut was all good. I mean to think only about what I need to do to have my best run, and not think about the guys lurking behind me. I’ve raced Andy (Potts) probably 15 times over my career and never beaten him. I’ve been second to him twice—once with a duct taped jersey and once after leading for 6 miles before melting down over the last mile at Oceanside. So needless to say, even with a 45-second gap at mile 7, I was still worried. 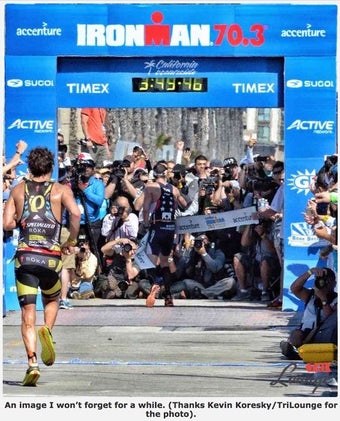 I’ve been on the other side of the finish tape from Andy a few times, most notably in Oceanside in 2013 (this pic from my race recap after)—so I knew I still wasn’t safe until the race was over!

But I did a good job of staying internal and focused on what felt smooth—which on that day ended up being just under 5:40/mile (nice when you have days like that). I didn’t feel like I was pushing, but wasn’t taking it easy either. The lead grew to about a minute, and I knew I was safe—if I didn’t cramp. And then I cramped! But I just ran through it, which as you might expect felt pretty terrible, and lost maybe 10-15 seconds that mile. But weirdly after the cramp my leg kind of released and I felt pretty good for the last two miles. Overall I crossed the finish line feeling super strong, like I could have kept going for a while—which I guess is good for Ironman because I’ll still have a long ass ways to go in 3 weeks when I hit mile 13!

Thank you guys so much for reading, cheering, and giving me something to start writing in my head while I’m out there on the race course. I’ll be back next week to talk about equipment changes (basically making myself as cool as possible) and anything else I can think of with just two weeks left to go!

As always, thanks a ton to my sponsors who provide all the support necessary to do this as a job. And finally, thanks to my family, friends, coach, and I’m serious like more than one dozen crazy ass fans for keeping it fun. If you have any questions hit me up on Facebook, Twitter, Instagram and/or Strava. Until next time!