What’s at the top of every triathlete’s 2018 wish list? A new PR, of course. Be the first among your training buddies to nab yours by attending a triathlon camp. And hurry—these spots sell out fast!

Whether your racing goals skew casual or Kona-caliber, training with an established coach during a structured camp can offer a fun shakeup for both body and mind. You’ll enjoy a different training stimulus while exploring a foreign place, forge new friendships, and get primed for a performance breakthrough. Start planning now for this year’s epic SBR escape with one of these premium experiences.

RELATED: Making the Most of a Triathlon Training Camp

Geared for: All abilities, although Scott suggests prior completion of at least one race of Olympic distance or longer and “a generally steady workout routine.”

The draw: This is the only camp where you can train directly under Scott, a six-time Kona champion on the iconic Ironman World Chamionship course. Scott, aka “The Man,” guarantees a breakthrough in your triathlon performance using his strategies for improving technique and form, and purposeful workouts. Bonus: You’ll feel like royalty as a guest at this seriously posh beachfront property.

Game-changing gain: You’ll learn how to train your body to become a fat-burning machine. (Hello, racing weight!) Scott, a big proponent of the ketogenic diet—which says no to starchy, processed carbs and yes to whole foods and good fats—will teach you how to remap your body so you burn fat as fuel instead of sugar. 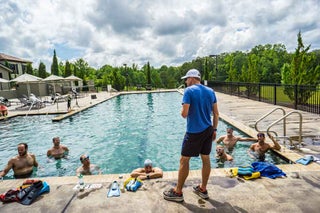 Geared for: “The committed triathlete who wants to improve to the next level,” says coach Matt Dixon (i.e. not total-newbie appropriate).

The draw: Education is a big focus at this intimate camp, held at Hotel Domestique, Rich and George Hincapie’s upscale boutique hotel catering to cyclists. You’ll spend a lot of time learning about proper nutrition, functional strength, race planning, and more between training sessions. And because this is a Hincapie hotel, you never know who will join you for a ride. Last year, campers were treated to a spin beside Hincapie, Cadel Evans, and Christian Vande Velde.

Game-changing gain: If you want to supercharge your bike leg, this is the camp for you. Cycling coach Paul Buick will fine tune your fit and technique, and you’ll feel like a total pro with the Hotel Domestique SAG support on stunning rides through the Blue Ridge Mountains. 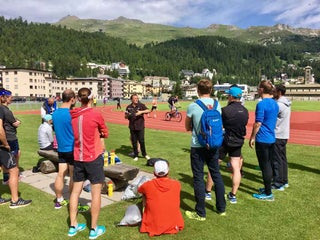 Geared for: All experience levels

The draw: There’s good reason coach Brett Sutton’s training camp in the Swiss Alps begins to book up about a year in advance: campers get one-on-one access to one of the most successful coaches in triathlon history (he’s guided the likes of Chrissie Wellington, Daniela Ryf, and Nicola Spirig) in a fairytale alpine locale. Four Olympic medalists in triathlon at the Rio Games (and Ryf) made St. Moritz their training base. Why? Athletes get the physiological benefits of training at high altitude (almost 6,000 feet) while still enjoying relatively flat terrain.

Game-changing gain: Since most TriSutto camps are held in conjunction with his pro camps, you may look over in the next lane and realize you’re swimming next to a world champion. Training with triathletes that are faster, stronger, and more experienced will up your own tri game.

Geared for: All experience levels

The draw: Ten years strong, this camp includes six days of fully supported training and guidance from a team of veteran coaches, some of which are current or former pro triathletes like Justin Daerr and Marilyn Chychota. You’ll find out why Tucson is a popular winter training hub as you take on popular climbs like Mt. Lemmon (don’t miss the Cookie Cabin) and Kitt Peak, and smash run intervals to the backdrop of the dramatic desert landscape. Education is a big priority, too: Last year’s nightly presentations included a talk by a certified nutritionist as well as a coach/pro athlete panel.

Game-changing gain: Because this is a longstanding camp that sees a lot of returning athletes year after year, new campers learn not just from the coaches but also from the “senior” campers. This camp’s reputation for camaraderie and friendliness is second to none.

Triathlete’s Complete Guide to Training for a Half-Iron/70.3 Triathlon