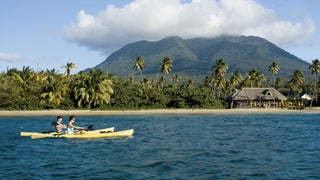 This triathlon-friendly Caribbean island makes for a wonderful winter getaway.

I never planned on racing a triathlon on Nevis Island, but how could I say no with Winston Crooke’s smile? My wife and I had come to his store looking to rent bikes and were greeted by Crooke—a tall, thin, athletic man with dreadlocks and a surprising British accent (he was raised in the U.K.). “We have a little local triathlon on Saturday if you want to race,” Winston said, pointing to a sign listing the monthly winter races of the FLY (Forever Live Young) Miniseries that lead up to the island’s major triathlon, TriStar Nevis (won in April last year by none other than Chris McCormack).

Nevis is the smaller island of the two-island federation of St. Kitts-Nevis, just southeast of Puerto Rico. Its small airport receives some direct flights, but it’s easy and significantly cheaper to fly into St. Kitts on a major airline (American Airlines offers daily flights) and then take one of the frequent boat ferries to Nevis.

Nevis offers a variety of lodging options, from a recently renovated five-star Four Seasons resort to private rental homes. The remains of the sugarcane plantations that drove the island’s economy during its early British colonial days are now home to upscale hotels including beachfront Nisbet Plantation and mountainside Golden Rock Inn.

The island, which surrounds the often fog-covered mountain peak of an inactive volcano, is only 7 miles long and 5 miles wide, with a major 21-mile road that goes around its perimeter. Driving is on the left side on this former British colony, and though the road is narrow and the rules of traffic a bit improvisational, most island drivers are accustomed to watching the roads carefully for everything from bands of green vervet monkeys to sheep to the wild donkeys that roam the island, so cyclists are just part of the mix.

Winston Crooke’s bike shop, Wheel World (Bikenevis.com) is the primary bike rental option on the island and it’s far better than your typical beachside bike rental shop. Remember to bring your cycling shoes because Crooke not only offers the typical bike rental platform pedals with cages, but can also set up a bike with Look or Shimano SPD pedals. Crooke and Reggie Douglass, a local triathlete known as the “Flying Rastaman” who qualified for the Ironman World Championship 70.3, lead regular road and mountain bike tours.

If you want to get in some serious winter triathlon training, Nevis has two ITU-certified triathlon coaches—Crooke and James Weekes. Training can be arranged through Crooke’s Wheel World bike shop. One of the incredible things on Nevis is the number of young triathletes Crooke and Weekes are training. Expect to see some of these kids one day gracing the stage at Ironman 70.3 St. Croix and beyond.

Nevis has several beaches, mostly associated with various resorts, but even if you are not staying at the resort, you’re usually welcome to access the beach, especially if you pay your dues at the bar. Nisbet Beach offers the whitest sands and the best water for swimming undisturbed by boats.

After a swim or bike ride, relax at one of the island’s many excellent restaurants. Most of the resorts have good restaurants, but Golden Rock Inn stood out. The broiled lobster tail accompanied with mashed plantains made us pause over every bite. There are several excellent restaurants outside of the resorts that any visitor should certainly check out. Sunshine’s is on Pinney’s Beach and offers a great open-air dining experience. The lobster sandwich is a filling meal after a swim and with a side of conch fritters could easily feed two. Sunshine’s menu changes regularly with what’s just come in from the local docks. The Killer Bee, Sunshine’s version of rum punch, is a favorite. In Charlestown, the capital city, you can stop at the Jamaican Bakery to get a roti, a local favorite that resembles a savory stuffed crêpe.

In those dark days of winter, when the whir of the bike trainer and treadmill are all too familiar, Nevis is a welcome break to up your vitamin D and get a solid start to your season. “An athlete can come to Nevis and indulge themselves in their sport without distractions,” Crooke says.

On our last full day in Nevis, while temperatures were still below freezing back home, I raced my first triathlon of the year. There were only a handful of us, 20 or so, mostly locals, several of them the high-school-age kids Crooke is training. But there were also some other tourists, with Ironman T-shirts and new beach tans, who I’m sure were convinced as I was that a triathlon on a beautiful island, on a rented bike, with a group of friendly people, can be a wonderful way to start the season.

A rainforest hike Try “The Source” trail. Named for the island’s freshwater spring, the trailhead starts at Golden Rock Inn. Expect to see monkeys and to climb an ancient rusty ladder. Golden-rock.com

A beach-side massage Go to the Four Seasons Spa. A variety of massage therapies and other spa treatments are available. Fourseasons.com/nevis/spa

An introduction to scuba Go with Ellis Chaderton’s crew to get a taste of reef life and a first-time scuba experience without having to go through a pool practice. Experienced divers can also get a great dive with sea turtles and rays abounding. Scubanevis.com

Island-style pizza Eat at Mem’s. This is a local place, not visited by many tourists, but it has some of the best pizza we’ve ever had. Toppings range from lobster to pinneapple and ham (Island Style). (869) 469-1390

To visit Alexander Hamilton’s birthplace Tour the Hamilton estate. This Founding Father was born on Nevis, and the ruins of his family’s estate just outside Charlestown offer a wonderful view of the island. Nevis-nchs.org

Take in breathtaking gardens Visit the Botanical Gardens of Nevis. The gardens mix the skill of British horticulture with the wonders of a tropical ecosystem. Botanicalgardennevis.com

Triathlon News & Notes: What You Missed in January