Once you swim in one of these gems, you’ll never want to train anywhere else.

The scene:
Located in Vancouver’s hip Kitsilano neighborhood, the pool sits at the edge of a popular beach and offers 360-degree views of the ocean, mountains and downtown skyline.

The deets:
At 150 yards long, “Kits Pool” is Canada’s longest pool and the city’s only heated saltwater pool. It is open from mid-May to mid-September, and the drop-in fee is about $5. The pool is divided into three sections, with a large area for lap swimming.

Extras:
The pool is the summer home of the Fastlane Masters swim program (Fastlaneswim). There is an onsite café, and a plethora of places within walking distance—either on the beach or Kitsilano’s W. 4th Avenue—to grab a great meal post-swim. 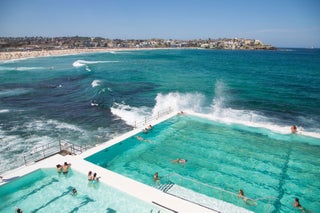 The scene:
Jutting out into the Tasman Sea on Sydney’s renowned Bondi Beach, the Bondi Baths swim complex includes an Olympic-distance pool run by the Bondi Icebergs swim club.

The deets:
This is where the open water meets pool training—literally. In bigger surf conditions, waves crash over the edge of the pool. Log some laps in the large pool while the kids play under the watch of lifeguards in the smaller adjacent pool.

Extras:
Workouts are guided by Olympian and world Masters champion Neil Rogers. With its bistro, two bars and 1,600-square-foot sundeck, the more than 100-year-old Bondi Baths is where locals go to both train and play. 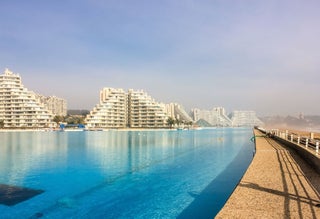 The scene: The developers of this coastal resort complex built a massive saltwater “lagoon” to provide guests with a taste of the Caribbean in central Chile.

The deets:
At 3,323 feet long (and covering 20 acres!), it holds the Guinness record as the world’s largest man-made lagoon. Sixty-six million gallons of water is pumped from the Pacific and filtrated to fill the lagoon (annual maintenance costs about $4 million).

Extras:
Guests can swim at leisure or sign up for a coached swim session that focuses on breathing technique and stroke mechanics. Or you can explore the lagoon via kayak, scuba dive or sailboat—classes are offered for each activity. 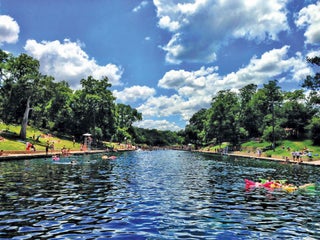 The deets:
The pool, which is 1,000 feet long and spreads over three acres, is open daily (except for Thursday) for lap swimming (a pass costs $3). The average water temperature is 68–70 degrees Fahrenheit, making it an inviting place for a plunge any time of year.

Extras:
The springs, considered sacred by the region’s Native American population, are said to have healing properties. Keep your eyes peeled for the endangered Barton Springs salamander, which is protected within the pool’s habitat.