Up the fun factor of your next traincation by combining history, sightseeing, and the core-blasting workout that is belly laughing. It’s easier than it sounds!

This week-long funny fest mirrors the spirit of its namesake by giving emerging up-and-comers stages to see if they can become the next big thing. Locals and talent from around the country perform improv, sketch, standup, and live podcasts.

Hipster Factor: If you haven’t heard, Brooklyn became the new Manhattan more than a decade ago. Much of the borough is the stylish locale for edgy yuppies, hipsters, millennials, new/young families with money, and the stalwarts who dug their heels in before the trendsetters came. What this means for tourists: eclectic and authentic shops, cafes, and bookstores; generally safer, cleaner streets and parks; and cabbies who won’t kick you out of the car for saying you need to go to Brooklyn.

Where to bike: Loop (many, many times) around Prospect Park (one full loop is about 3.5 miles) or head to the water for more local mileage: the Brooklyn Waterfront Greenway, Ocean Parkway, and the Belt Parkway Promenade.

Where to run: The leafy, undulating 3.5-mile loop in Prospect Park is a well-known destination, as is a jaunt across the Brooklyn Bridge. Do an out-and-back across the iconic bridge at sunrise, then head into Brooklyn Bridge Park to soak in the cityscape without the crowds. The Brooklyn Greenway stretches along the shoreline for 14 at miles, but if you want to do hill repeats, Green Wood Cemetery o ers slopes with various elevations. Glimpse the Statue of Liberty and the Brooklyn Bridge from the vistas along the Brooklyn Heights Promenade; extend your route by zipping through nearby Park Slope.

Just Keep Swimming: Get to town a couple of days early for an organized open-water swim. There’s the 2-mile Liberty to Freedom Swim on Sept. 15 in Manhattan and the 6.5-mile Spuyten Duyvil swim on Sept. 16 in Yonkers. 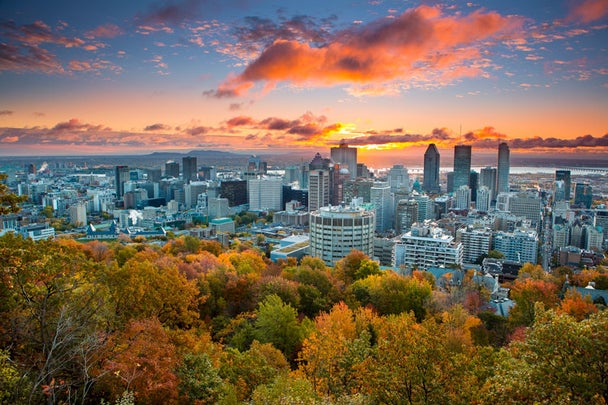 Where to bike: Montreal is home to more than 217 miles of bike paths. For a flat ride in town, Lachine Canal is a no-brainer. Get a view of green spaces and the Lachine Rapids on the 13.5-mile path that runs along the St. Lawrence River. Trek out to the lush countryside on the Veloroute bike path, which runs for 28 miles along the Rivière Chaudière Valley.

Where to run: See sculpted works of art, verdant expanses, and boats in the marina in René Lévesque Park, Monk Park, and the Lachine Canal. Loop around the 1.3-mile asphalt path in Parc Jarry to get tempo, intervals, and fartlek-work done. Meander along the paths of Parc du Mont-Royal—the largest park in the city, designed by Frederick Law Olmsted of New York City’s Central Park design fame.

Treat yo’self: Work out those kinks with a one-hour deep-tissue sports massage for $95 at TX Therapies; other services include physio, cupping, and athletic therapy. 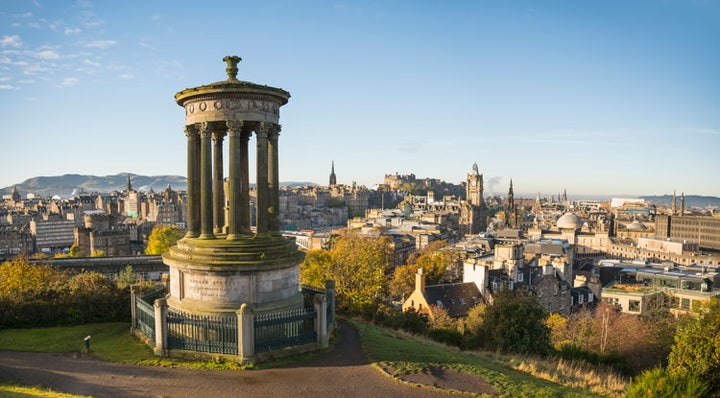 The world’s largest arts festival features over 53,000 performances in 300 venues spanning 25 days in 2017. It literally transforms the city into an entertainment mecca.

Sights Factor: You can’t help but be immersed in the majestic history of Scotland’s capital city as you view the Gothic spire of the Scott Monument, the grandiose walls of Edinburgh Castle, and the cobblestone lanes that wind throughout. Sip afternoon tea at the swanky Colonnades, get a whisky education and a buzz at one of the city’s distilleries, and window shop at the one-of-a-kind boutiques on Victoria Street.

Tri Factor:
Where to swim: Head to Portobello Beach, a seaside suburb just a few miles from the city, or rent a car because the 40-minute drive to Threipmuir Reservoir is worth the trek for its warm, 70-degree water in the summer and unobstructed views of the mossy slopes. Indoor pools: the Drumbrae Leisure Center ( ve lanes, 25m) and the Warrender Swim Center (five lanes, 25yds).

Where to bike: The North Edinburgh Bike Network has rolling off-road trails. For a wide, paved path, head to the Silverknowes Esplanade. For an easy ride near the city center, make your way to the Meadows and Bruntsfield Links, where you can hook up with the Union Canal towpath.

Where to run: Negotiate the clumsy steps and sometimes steep, slippery path to the summit of Arthur’s Seat, and you’ll be rewarded with panoramic views of the city. If hill running’s your thing, head to the Pentlands to get your fill of rolling terrain and storybook scenery. For a longer, flatter run, the Water of Leith pathway winds just over 12 miles from Leith Docks to Balerno.