But there are some extraordinary places on this blue marble where they do—where you can lay down a brick workout in the shadow of a gorgeous pile of Gothic bricks. Where you can contemplate ultra-modernism and ultra-distance at the same time. Where miles and styles matter.

Design highlights: While southern Spain is rich in Moorish and Romanesque architecture, Madrid favored Spanish Baroque parties like the Palacio Real and Palacio de Cibeles. Exercise your eyes with the ultra-modern CaixaForum or Las Ventas’ Moorish-style bull ghting arena, and exercise your legs in the magical Parque del Buen Retiro.

Swim/bike/run: It’s telling that the Bola del Mundo high-altitude bike route is described on a site called “Dangerous Roads.” Grades vary from 6 percent to 23 percent. Reach it from Madrid city center on a 20-mile dedicated bike lane. Pools are numerous, 5 to 15 euros to swim. Run on nice and hilly dirt at Monte de El Pardo just four miles outside the city.

Insider Tip: Madrid resident Roger Serrano Salgado, XTERRA elite triathlete, and organizer of XTERRA Madrid—which is held in Alcala de Henares in September—says you and your bike can make the scene at cycling bars (sí, it’s a thing) in the hip Malasaña district. La Bicicletta cafe is at the intersection of bikes, art, and coffee.

When to go: Late April, May, June, and October are warm and fairly dry; avoid the rainy season November through February.

Design highlights: Native son Oscar Niemeyer, a leading figure in modern architecture, lavished his hometown with iconic examples of the form—Esplanade of the Ministries, Ermida Don Bosco, Cathedral of Brasília, Palacio do Planalto, the National Congress, and the Cultural Complex, to name a few.

That time when building a city from scratch worked: The capital of Brazil was moved from Rio to empty grassland in the center of the country in 1956. That’s how Brasília became a playground for modern architecture. Unlike other utopian dreams (Google: vegetarian-vision Octagon City, Kansas), Brasília thrived.

Swim: Dunk in the pool—and enjoy nature—at Brasília National park for about $3.75 USD.

Run: You could run on the landmark 3⁄4-mile JK Bridge, or do a 6.25-mile loop through City Park. Or you could get crazy and connect them for a serious 10-ish-mile Brasil-aganza.

Insider Tip: Make a Brazilian caipirinha—lime, ice, sugar and cachaça—and enjoy it on the cantilevered deck of your ultra-hip Airbnb for a perfect post-workout, post-modern chill session. 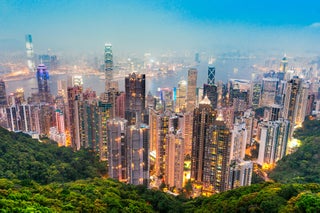 When to go: November through April—temps are moderate but humidity is always a thing

Design highlights: Traditional Chinese architecture like the Man Mo Temple in Sheung Wan district is wedged between contemporary skyscrapers. Climb up and marvel at the ultra-modern Peak Tower; take public transport
to the traditional stilted shing village of Tai O on Lantau Island.

It’s all really close: Thirty minutes up and over The Peak from town, and you’re on steep, jungly singletrack. The area is also made for mini-triathlons of your own design using the close-proximity swim/ bike/run hotspots at right.

Bike: Get a bike, a route, a guide, or any combination of those at Global Cycle Rides. In general, the south side of Hong Kong island has the best cycling from Wong Chuk Hang to Shek O Beach.

Run: Bowen Road, etched horizontally into a densely built hillside, is at and convenient. Or Aberdeen track. Get real Hong Kong avor with the insanely scenic Dragon’s Back trail.

Insider Tip: Hong Kong is uniquely set up for year round (okay, hot in the summer) tri-training. But there are many who visit solely for the dimsum ‘n cocktail scene.

When to Go: May through October

The Frozen Elephant in the Room: Yes, there is the -30 degrees thing. You’ll avoid it if you go during the suggested dates, but consider this: It made Gwen Jorgensen stronger. To say nothing of cycling legend Greg Lemond, 1500-meter runner Carrie Tollefson, and Mark Nenow, who ran 27:20.56 for 10K in 1986—an American record that stood for 15 years.

Swim: The University of Minnesota has four pools—three on the Minneapolis campus and one on the St. Paul campus; $10 for non-students. June through August in Minneapolis means Open Swim (i.e., across one of the area’s many lakes).

Bike: Take the 18.3-mile Gateway Trail from St. Paul to Stillwater to Square Lake Trail to Route 95, and cruise along the banks of the bucolic St. Croix River separating Minnesota and Wisconsin. Or call Grand Performance Bicycles for other routes.

Run: The Mississippi River provides the scenic backdrop for a 50+ mile, traffic-free trail that circles lakes, connects neighborhoods, cities, and parks, and flows on both sides of the river. If it’s dirt you’re after, go east ‘til just before Wisconsin: Relentlessly hilly, shady and beautiful, Afton State Park has plenty.

Insider Tip: Jorgensen’s favorite spots include Izzy’s Ice Cream in St. Paul, Lowry Hill Meats in Minneapolis, Punch Pizza, and Grand Performance bike shop in St. Paul—where you can get your ride tuned up as you scroll your eyeballs upward to the second story where Jorgensen and her husband lived when they were in town.