Collegiate triathletes are stronger, faster, fitter, sillier, and hungrier than you. And other shrewd observations on those who hold the future of our sport on their shoulders, gleaned from the two days intrepid reporter A.C. Shilton spent embedded with the North Carolina State University club tri team.

Dear age group triathletes born before 2000: I have seen the future, and it looks like a lot of young, wrinkle-free bodies in spandex, sprinting by us geezers. The kids are coming. And they’re fast, dedicated, and have the metabolisms of greyhounds.

Case in point: It was snowing the day I pulled into the North Carolina State University campus to observe a swim workout. Snow! In March! In the south! I thought for sure practice would be off. After all, in the Land Of Y’all, snow events cause more panic than giant asteroid sightings. However, at 7 p.m. sharp, eight athletes squeezed their scalps into swim caps, suctioned goggles to their eye sockets and leaped into the pool.

“Nationals are in a few months,” was the common refrain whenever anyone wanted to skip a set or lengthen a rest interval.

Young athletes are currently a big focus for USAT, says Carlyn Marconi, the organization’s communications manager. In conjunction with Ironman, USAT has an initiative called “Time
To Tri,” which hopes to bring in 100,000 new triathletes by the year 2024. Ideally, many of those new racers will be high school and college-aged kids.

We wanted to get a sneak preview of Triathlon: The Next Generation, so we could see the kids who are going to beat us up close—in particular, the kids who have nothing riding on their tri participation other than bragging rights and beer bets. After two days hanging with the North Carolina State University’s collegiate triathlon club, one of the 140 collegiate clubs in the U.S. we have good news and bad news. First, the bad news: You’ll soon be kissing any hopes of a top podium spot goodbye. But the good news? The sport is in competent hands.

Now, lest you think every athlete on the NCSU team is hitting eight workouts a week with the intensity of an Olympian, know this: When I asked who had come up with the evening’s swim workout, Evan Walsh, the team’s captain and a senior at NCSU shrugged and said, “Our coach sends us weekly workouts but sometimes they’re really complicated, so I just ignore them.”

The swim sets were a mix of pulling, kick work, and a few sprints. Afterward, everyone dragged themselves out of the pool and agreed to meet in the dining hall across the street. As I introduced myself as the journalist who would be trailing them for the next two days, I made the crucial mistake of saying, “We’re excited to see what collegiate triathlon is all about. The sport didn’t exist when I was in college.”

Immediately, I could see the student-athletes wondering if perhaps this was because I graduated before the invention of the wheel. (But, I bet they’d be super impressed to see all the Strava records I set on my brontosaurus.)

Like any triathlon squad, these athletes are a diverse bunch. There’s the super-serious gal. The fit-without-trying guy. The girl you can count on to pull you home when you’re bonking. The bike nerd who talks endlessly about Ultegra versus Dura Ace versus SRAM. And the teammate who always makes you laugh, even when you don’t have the breath for it.

In this group, Sanya Mehta is the super-serious one. A sophomore studying nutrition science who holds firm when others start bailing on the 6 a.m. Tuesday run practice. Sure, the temperature is predicted to be sub-arctic, but Mehta shows no mercy. Again, “Nationals are coming,” is her reminder. Grumbling, a few others commit.

Mehta is after a top placing at collegiate club nationals. She also wants to do more draft-legal racing. In the NCAA iteration of triathlon, which is only available to female athletes at the moment, the races are draft-legal. NCSU is a club team, so normally she’d be locked out of the NCAA races. However, there are some draft-legal race spots offered to top-level club athletes for the NCAA championships each year. Mehta intends to snag one.

To get there, she’s running her 800-meter repeats the next morning at 6 a.m., though a sheet of ice covers the outdoor track, so the students moved practice inside. NCSU has a two-lane indoor track. It’s short, so you’re constantly turning, but other than that it should be ideal for winter running. The only problem is that the thermostat today is set to “Sahara Desert,” and the runners dressed for outdoor temps. After every rep, the athletes suck from bottles and wipe sweat from their faces. “I don’t feel good,” someone says, doubled over, hands on their knees. Still, there’s enough friendly competition that everyone chases each other around and around until the misery is complete, and they’re good and dizzy.

While Mehta shows up to workouts because she wants to race well, there’s an entire other section of the team focused on the social side. A few athletes live together. Walsh, the captain, keeps a small gaggle of bike trainers in his apartment.

On rainy days the whole team of 15 will cram into one room to ride together. For spring break, a few teammates backpacked through the Grand Canyon—caravanning to races and bunking up in crappy motels is sometimes as fun as the race itself. And there are more than enough inside jokes between the group that sometimes they’ll all break into laughter and this reporter is left wondering if she missed something or if her hearing is just going.

But collegiate triathlon is not without its struggles. Each year, the team faces a predictable hurdle: A ton of students will sign up to join the club, then, however, interest quickly wanes. “It can be hard to get people to stick with it, especially when they see what it takes to be really good at it,” Mehta says. Her teammate, freshman Jerod Schwandt, agrees. “There’s a financial component of this sport that makes it hard for people too,” he says.

Experienced teammates try to help newbies find bikes on Craigslist, and the school covers some portion of race entry fees depending on how many students enter. Still, it adds up. “I just changed my tires for like the first time ever,” Walsh says. To afford the tri lifestyle, he adds, “I don’t spend my money on beer. It’s school, rent, utilities, triathlon.” He says this earnestly, and if he hadn’t just told me about the team’s beer-mile tradition moments before, I might believe him.

There’s also the issue of grocery bills that rack up. “It’s all about the unlimited meal plan,” says one student. Another who lives off campus says he makes ends meet by evaluating each item’s cost-to-calorie ratio. Frozen pizzas? Nutella? Ice cream and peanut butter? All good. Spinach? Forget it. “Are we disgusting you yet, Sanya?” they ask. Sanya, the nutrition studies major, looks mildly horrified.

After the morning track session, the group splits quickly. One student has a paper to finish before noon. Two others are going to get coffee. Some head to breakfast at a dining hall. Before they go, I ask them to tell me what they love most about triathlon and what will keep them engaged after they graduate. A rift forms: Some say it’s the camaraderie; others like the sense of accomplishment; a few say that the level of fitness is too awesome to give up.

There is, however, one thing they all unanimously love about the sport: That triathlons are a free-food bonanza. From the pre-race pasta dinner, to the gels in packet pickup bags, to the pizza at the finish line, to the continental breakfasts at the Super 8s where they bunk, even Mehta has to agree, the free food is pretty great.

Proving once again that collegiate triathletes are just like us—and that the next generation of racers has their priorities solidly in order. 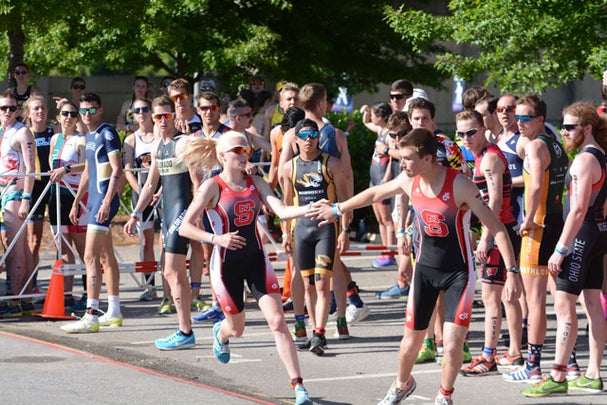 College: It’s a time for doing dumb things, and living to tell tales—like these— over a few beers.

Sharing Is Caring
“Once, the NCSU team pulled up to a race venue only to have one of its members realize they’d forgotten their helmet. The guy set a new record in T1 as he waited for a teammate to finish the bike leg so they could hand off his helmet.”
– Even Walsh, NCSU Team Captain

A Sticky Love Situation
“When a love interest told me he was entering a local triathlon, I figured I’d impress him by entering too. After the race, I went to chat him up and it was a total bust. He hadn’t the slightest interest in me. I thought it might have been because his fragile ego was damaged when I passed him on the bike. But when I got to a mirror, I quickly realized I had a pretty horrifying smear of chocolate Gu across my face. The love interest didn’t last, but I’m still running, biking, and swimming.”
– A.C. Shilton

Beware the Ghost of Jack Daniels
“In college I tried to run cross-country. One morning I was particularly hungover—mainly because my diet was Jack Daniels and celery—and as we were running in the dark past a graveyard, I fell in a ditch and twisted my ankle. Because I was slow, no one even noticed I was gone or came looking for me. I was worried that the 700 angry ghosts in the cemetery were going to hunt me down, so I limped my way back to campus. SometimesI wonder what that college coach would think of me now—all the racing I’ve done, marathons, Ironmans. She would probably be like, ‘But does she still fall in ditches?’ Yes. Yes, I do.”
– Anne Reed, A Florida-based age-group athlete

7 Veteran Triathletes Share The Advice They Wished They’d Had

Answers to The Most-Googled Triathlon Questions