It’s no secret that the road to qualifying for the Ironman World Championship in Kailua-Kona, Hawaii is tough. For many, the dream requires years of training, racing and sacrifice—and even then, it’s far from guaranteed it’ll come true. We often highlight the accomplishments of those who make it to the sport’s biggest race, but what about the loved ones who support (sometimes begrudgingly) the Kona dream? Here we’re sharing the honest account of Kathleen Oswalt of Charleston, S.C., who supported her husband, Don, on his way to fulfilling his goal of racing the Ironman World Championship in 2016. This story first appeared in a Triathlete magazine she made for him to send him off to Kona, filled with articles, photos, and good-luck 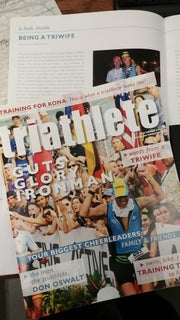 messages from friends and family.

This journey began after Don and I started dating but before we decided to get married, so you could say I knew what I was getting myself into. It hasn’t been smooth sailing; we’ve hit a few bumps in the road but all in all it’s been a ride of a lifetime. To tell people that my husband is an Ironman World Championship finisher is pretty amazing and to know that I had some small part in helping him get there, well I would say it feels special. When I look back and reflect on what we have accomplished I find it incredible that we made it through an eight month training and racing season two years in a row, a trip across the country to Kona, Hawaii and a full week of Ironman stuff with only a few minor meltdowns and a couple of “I can’t wait for this shit to be over” moments. I’ll own up, the meltdowns were mine and when I call tri-life “shit” it’s in a loving spouse kind of way. I heard this saying recently and as soon as I heard it I knew it was Don and I; Teamwork makes the dreamwork! Yup, that’s us.

My life changed in 2012, I say that with a little bit of a heavy heart because it wasn’t my choice and at the time I didn’t like it. In the triathlon world there’s a saying “divorce by tri.” The more you have “tri” in your life, the more you understand this is a true phenomenon. Although Don and I weren’t married, we were headed down a dark road that was leading us straight to breakup. Tri-life was taking over my boyfriend Don and I was feeling left to the wayside. Resentment was building up, communication was extinct and life was at its lowest for us. We had some work to do—actually a lot of work to do—if we were going to make our relationship last. So that’s what we did. We hired a therapist to help us talk through our feelings, fears and find balance in a life full of training and races.

It was during this time that I started realizing a few things. I learned I needed information, I didn’t like finding out about the next race on Facebook or at dinner with friends. I was the most important person in Don’s life and, with that, I felt like I had a right to know what he was up to before everyone else so we could plan our life together. I was resentful that I was the one picking up the pieces when training was getting long and hard. When I would look at the calendar, I started processing that I didn’t have anything fun or special scheduled but my boyfriend then fiancée and then husband was getting to do all sorts of things related to training and racing that he considered fun and that fulfilled his life. Lastly, there was always this little space in my brain set aside to keep track of how much it costs to be a good triathlete and how the scale always seemed to be tipped in Don’s favor. At times I wondered, what about me? What do I get?

With much help from our therapist we learned, and we practiced, and we learned, and we practiced and we learned more. Together, we had the chance to work on our relationship in 2013 when Don did his first full Ironman. We practiced better communication and more balance, but we struggled. It was a long season and I was glad to see it end. When I look back, really the entire season was difficult but I believe the worst moment for me was talk of his next race the morning after he finished his first Ironman and again a day later on the drive home. I truly could not believe my ears, after struggling through our relationship for about nine months I was exhausted both mentally and emotionally and I kept thinking ‘when is it enough?’ I think I cried for two days and unfortunately ruined the excitement and great achievement Don had just accomplished. The most valuable lesson I learned that year was that a triathlete is NEVER done and is ALWAYS looking ahead to the next race. I learned that what has been accomplished is never enough. I knew that if Don and I were going to create a life together, this was another thing I must learn to understand and have patience with.

In November 2014 we got married, so instead of saving money for races we were saving money for a wedding. You could say triathlon season was fairly low key this year. Once we came back from our honeymoon, the triathlon planning had begun (well who am I kidding I’m sure the planning begun much sooner than that but I got the information I needed after the wedding).

Ironman Chattanooga was on Don’s mind for 2015 and so was qualifying for the Ironman World Championship. That meant we had another year, if not two, to work on balancing life and a full season of training and racing. We learned to communicate better, we learned to find better balance so we both felt fulfilled, I learned to make more time for things I enjoyed versus feeling like I had to keep the ship from sinking. We had weekly “business meetings” to check in and make sure each of us was doing okay and Don worked really hard on being more sensitive and in tune to how tri-life was affecting me.

Don’s ability to work on putting me before tri-life was huge, his efforts really moved our relationship in a positive direction and I appreciate that tremendously. We did much better this time around. I had a few meltdowns toward the end of the season when I was close to having enough of all of the triathlon stuff. It was reassuring to hear our therapist acknowledge our crazy life and tell us that it was truly acceptable to have a few hiccups along the way with what we were putting our relationship through. Remember I told you triathletes are NEVER done? They are always hanging on to the next race. Once we were getting close to heading to Chattanooga the best thing I did for myself and my emotional stability was to verbally request to my Ironman husband and his family who were joining us “PLEASE forgo any talk about the next race.” By the time Chattanooga came around I was DONE and I didn’t want to hear about anymore races but, just in case, I had prepared myself to hear the words, “what race are you doing next?” because again that’s how every triathlete’s brain works and they can’t help but ask each other that very question, this is where some more of that patience and understanding comes in.

In the end we did talk about the next race. My husband qualified for the 2016 Ironman World Championship; this time we were headed to Hawaii. We were going to the big leagues. As we rolled into 2016 and race season was upon us, I felt a pit in my stomach and the only way I could verbalize this feeling to Don was to tell him it felt like I was going to a funeral and he was going to a wedding. By funeral I meant, our life together was about to change again and I wasn’t quite ready and by wedding I meant he couldn’t wait for our life to change again! Two full Ironman races back to back is a lot for me, a lot for our relationship. So again, it was time to work on our communication, life-balance, getting things on the calendar for me so I didn’t feel left out, and learning to be “okay” with not attending every race so I could focus more on me while I supported him. Full circle, we made it to Kona and had a full, fun-filled week just focusing on Ironman. We were blessed to have an amazing trip and to have most of Don’s family there with us. The memories are priceless and dreams came true that week.

***
Yes, it’s true I did not pick this life for myself it was kind of forced upon me but the difference now is that I try to embrace it with open arms. We will always be working towards a balance that fits us both, this process is not easy nor is it perfect. I know that tri-life is never going away nor would I ask that of my husband. I know that even though it seems like qualifying and racing Kona should be the end all be all, I know it’s not. Yes, at times I despise everything that comes with being married to a triathlete. In the end I do have to acknowledge that this thing called tri-life has brought Don and I closer, made our relationship stronger, challenges me to be a better wife and Don to be a better husband.