When most people think of adaptive athletes, their mind conjures up a picture of a runner with a prosthetic leg, or a cyclist with a visual impairment riding in tandem with a guide. They don’t typically think of Karen Porter, who–on the surface–seems to be just fine.

“I think people are constantly surprised to find out I am an adaptive athlete,” says Porter. “I often get sideways looks from people. They look me up and down searching for a missing limb. But not all wounds are visible. You don’t have to be able to see a person’s challenge.”

Porter is classified as a “non-aesthetic, non-mechanical” adaptive athlete. The 45 year-old from Atlanta was born with a heart valve defect, an issue that was compounded in 2012, when she was called on to be a living kidney donor. When doctors prepared her for the surgery, they assured Porter she’d be fine with the one functioning kidney remaining in her body. She would even be able to return to running, as her one functioning kidney would adapt to do the work of two, keeping the body at normal fluid levels and maintain electrolyte balance. This was reassuring to Porter, a lifelong athlete with a love for long runs.

All went well with the surgery. But a few months later, Porter woke up feeling ill. “I didn’t feel well. It felt like a full body pain, a migraine, and a fight to breathe.” She visited her doctor at the Veterans Administration hospital, where she learned her remaining kidney, for unknown reasons, had stopped working. Scans also showed that her lung had been permanently damaged in the donor surgery.

The turn of events was a shock–up to that point, Porter had been looking forward to getting back to running. Now all of that was in question. Kidneys are essential to removing waste and excess fluid from the body, maintaining a healthy balance of water, salts, and minerals. They control blood pressure and make hormones to produce red blood cells, which carry oxygen to the lungs. All of these functions are critical for overall health, but particularly so in the active body.

“Healthy endurance athletes have acute renal insufficiency after big events,” explains Porter. “They rebound in 14 to 21 days without assistance. I start from an impaired place, so I do not have the margin to take such a hit.”

When Porter’s doctors said she might be able to return to running with the right nutrition and hydration plan for her condition, she perked up–as a registered dietitian, this was something very much in her wheelhouse. Working with her medical team, Porter was able to develop a plan of action. Protein restriction and daily salt tabs to maintain a baseline electrolyte balance became a critical part of resuming exercise, as well as close monitoring of nutrition, training, and recovery to prevent waste build-up.

If her training intensity gets too high or if a workout goes for too long, her kidney is not able to clear waste, leading to what Porter describes as a full-body migraine and fog. She also has problems with temperature regulation. “Even on a standard training run, I can have issues with hypothermia. If I am radiating heat and sitting in wet sweaty clothes, every breeze feels like an arctic blast.” 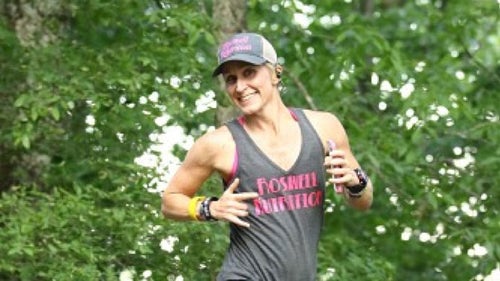 Through trial and error, Porter was able to find the right strategies to minimize these effects while running. As she began to feel strong again, she wanted to see what other challenges her body could conquer. She took up Obstacle Course Racing, becoming the first adaptive athlete to qualify for the Pro wave of all 3 major OCR championship races (Spartan, OCR, and North American). This progressed to an interest in triathlon, where she qualified for the Team USA Multisport World Championship only one year after her first sprint triathlon. (In triathlon, Porter does not race in a Physically Challenged division.)

Because she doesn’t look like the stereotypical adaptive athlete, many people don’t believe Porter isn’t a so-called “real” adaptive athlete. They’ll often ask Porter when she’ll try a half- or full-distance race. When she says she can’t do it, people take it as false modesty: “They look at me and say, ‘Don’t be silly! You are fit, you can do those distances.’ But no, I can’t. I’m not medically cleared for those distances. I am relegated to sprints and Olympic distances.”

The Right Way to Calculate Calories Burned in Training