Inside Triathlon magazine’s back page always features a column by two-time Ironman world champion Tim DeBoom. In honor of the upcoming new year, we picked our favorite column from 2011. It deals with DeBoom’s final Hawaii Ironman, which he raced in 2010, and the struggles he dealt with after his two world championships. 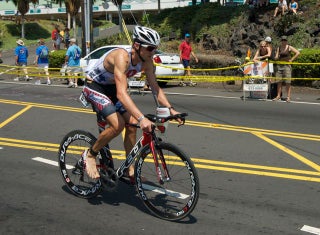 Midway through the 2010 Ironman World Championship, I began to see that the fairy tale ending I had dreamed of was not going to happen. Whether I had missed a few calories, or just didn’t have “it” on the day, I had to start searching for the real reason I was out there, putting my body through it one last time. My wife, Nicole, was cheering for me; my brother Tony was doing the same; and other competitors were even willing me on. None of that gave me any solace. I was on my own again.

Normally, solitude is my comfort zone. I revel in my own head. After all, I have been a professional triathlete for 16 years and started Kona 16 times. Triathlon, by definition, is an individual sport. As competitors, we are all racing for our own reasons, battling our own inner demons—on the course and off—and we have our individual visions of what it means to be successful.

This time, however, I was not up to the task. I didn’t want to dig into my head for more answers. I truly wanted to enjoy the day like I had planned. I have always preached that racing is the reward for all the hard work and should be the easy part of the sport—I never practiced what I preached. I took things too seriously for too many years, and when I didn’t, my performances were not up to my standards. It was time to break the pattern and enjoy the rest of the day. At last.

I began to cheer the athletes already coming back my way. I thanked every volunteer and tried to smile at everyone who cheered for me. If there is anything this sport has taught me it is patience and humility. I was humbled again, and patience would get me to the finish line.

Then I came across the person who could most understand and identify with my situation. Around mile 19, Normann Stadler was walking off to the side of the road, holding his hamstring. This was the one guy who knew exactly what I was feeling. I was disappointed, a little embarrassed, and I just wanted to get to the finish. I could see he felt the same and was experiencing it at the same time. We both had two titles, recent years had been tougher than expected, and we knew our careers on this island were close to an end.

I have always felt a bit of kinship with Stadler. We are not close friends, but we have a lot in common and a subtle bond. Earlier in the week, I was walking toward the expo for an appearance. Chatting with my wife, I remember laughing at something small and being happy with the lightness of the situation in a place that had always been so serious for me. I was happy to be there. Just then, I saw a familiar face sitting on a rock wall looking at his phone. Immediately, I gave Stadler a pat on the back and felt truly happy to see him. He is definitely one of the guys I will miss competing against, and I wondered if we would duel out there on Saturday.

While that duel never materialized, we were side by side on the battlefield again in a different scenario. I gave him a shout. “Come on, Normann. Run with me.” He gave me a wave as if to go on, so I continued to trudge ahead. Shortly after, I heard a quickened foot strike coming up behind me. I figured another competitor was about to pass me, but then I heard a familiar voice say, “I’ll run with you to the finish.” I gave a little smile and said, “All right. Let’s get this thing done.”

I think it was the only time I smiled for the last 7 miles of an Ironman. We shared a couple of laughs, traded leading through the aid stations and made a pact to finish together. Maybe the disappointment and shame I would normally feel with my performance could be dispersed by finishing with a partner. I hoped.

When we turned onto Ali’i Drive and had 400 meters to go, I felt the energy of the crowd and my smile broadened. This was the last time, and I knew it. I gave Stadler a pat on the back and said, “We better enjoy this!”
For the first time in my career, I let the crowd in. I waved to them for thanks and waved goodbye to the hallowed place. I saw a few familiar faces and gave them big grins. I slapped a couple of kids’ hands and then a hundred more came out for high fives. I slapped them all.

Even with the regret I was feeling about my performance and not ending my career in Hawaii with one more podium, I was satisfied. I crossed the line with a fellow brother in arms, gave him a man-hug and a hearty thanks. I’ll probably remember this race just as much as my victories, simply because I made it to that finish line one last time.

Recalled: From Blades to Bikes