Joey described himself in three words for the contest: cool, fun, TOUGH. Since we got to hang out with him for a day, we’d like to add a few more: kind, compassionate, and a loving dad and husband. 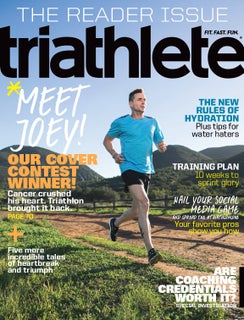 Quick to smile, he speaks in a slight Southern accent and given the choice, he’ll always choose the shorter shorts. He’s got an infectious passion for everyday life and a quiet determination that makes him a fierce competitor on race day. (Attention Joey Lee’s fellow racers: Don’t let the rubber ducky Speedo fool you—he’s out to win.) We can’t possibly tell Joey’s story better than he did. Below, his winning essay.

In 2017 I celebrate my 30th year competing in triathlon, a sport that has not only shaped my life, but quite literally saved it as well. In college at Louisiana State University I was without direction, barely skating by. I found triathlon by accident. I had always been a runner and swimmer, and I was riding my bike to my lifeguarding job to save money on gas.

A friend mentioned he was doing a triathlon, and I thought I’d give it a try. So, wearing purple and black tiger-striped Lycra shorts, and on a borrowed bike, I completed my first triathlon, the River Cities Tri. It was so much better than just running or a swim meet, and I was hooked for life. Triathlon helped me focus, gave me direction and gave me something to do besides go to bars every night. My grades improved, and I graduated with a degree in graphic design and began my career as an art director at a silk screening company.

In the late ’90s, I married a wonderful woman who not only supported my triathlon addiction, but forced me to train on days when I was feeling lazy. A couple years later, Allison came home and said, “Honey, does this feel like a lump to you?” Her melanoma had returned. 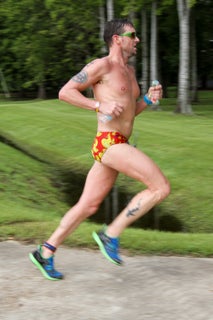 For the next two years we were in and out of intensive chemo and biotherapy treatments and 14-hour surgeries at M.D. Anderson and the John Wayne Cancer Institute in Houston. The treatments were so tough we were in the hospital for 2–3 weeks at a time. The only time I left her side was to train. For untold hours I would max out the crappy little recumbent bike and treadmill in the workout room at the apartment we rented. If I hadn’t had this outlet, I don’t think I would have made it.

Allison loved to watch me race, and whenever she was up to it she would make us go. I would agree even though my heart wasn’t in it. I was focused on getting her better. In January 2003, Allison lost her battle; I was crushed. The day she died, I went out for a hard 8-mile run, it was a beautiful sunset, and I remember it like it was yesterday.

The remainder of the winter I buried myself in training. I would exhaust myself so when I went to bed, I would just pass out. There were many freezing nights spent on the trainer with rivers of sweat draining out the garage door. By this point I’d been racing for 16 years and had never won a race. I trained so hard and so much that in 2003 I won four (Crawfishman, Heatwave, Tinman and the last one escapes me).

If it hadn’t been for triathlon, I honestly don’t think I’d have made it through Allison’s death. A couple years later, I was doing a local group swim at the Ross Barnett Reservoir on a Tuesday night and was scared by something in the water; I thought I was going to be eaten by an alligator! It turned out to be a woman named Casey swimming next to me. It’s a big reservoir, and there weren’t that many people swimming, so it shocked me to have someone so close.

That swim led to more workouts together and dinners following training. We developed an incredibly close friendship and I realized I was in love with her. A couple years later we got married. Triathlon had given me back all that I had lost.

Today we train and race together and are attempting to raise our 4-year-old daughter, Ginger Allison, in the triathlon lifestyle. I’ve been a triathlete for 30 of my 48 years, and the sport has literally molded me into the man I am today. All of my friends I met through training and racing, and I wouldn’t have met my wife if it hadn’t been for triathlon. It has gotten me through tremendous loss and heartache, and I know, without a doubt, I wouldn’t be here today if it weren’t for this sport.

Triathlete Hour Podcast: Nicola Spirig Looks Back on 30 Years at the Top of the Tri Game