The DeBoom family has tasted sweet success in the sport of triathlon. While the multisport world knows about Tim DeBoom’s back-to-back Hawaiian Ironman victories in 2001 and 2002, older brother Tony was a top tier professional as well. A graduate from West Point Academy, Tony trained with the Army Special Forces – the Army Rangers – and once he completed his military commitment dove headfirst into triathlon racing. During his career, Tony won St. Anthony’s and Ironman Utah as well as finishing runner-up to brother Tim at Ironman California and serving as an alternate on the 2000 US Olympic Triathlon Team. 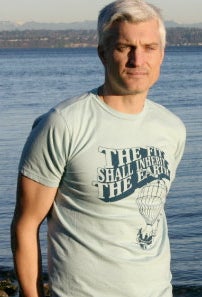 Once Tony decided to retire from racing, he served as the Director Sportiff for the Tri Dubai professional triathlon team, where he was responsible for coordinating and managing superstar athletes throughout the two seasons the team was in the sport.

Following his experience at Tri Dubai, Tony started up his own coaching company with Tim called DeBoom Sports Mecca. Besides working with a handful of age group athletes, they are also contracted by West Point Academy to coach their cadets on the West Point Triathlon Team.

We sat down with Tony to talk about his latest business venture, a casual clothing and tee shirt company called Endurance Conspiracy.

Triathlete: You had an extensive triathlon career as an avid age grouper and top pro. Having been retired for the past few years, what are your fondest memories from your competition days?

Tony DeBoom: Most of my memories have to do with the actual trips I took and the people I met. I travelled to some amazing places and always made sure to maximize every opportunity that came my way. It didn’t always add up to racing well, but it sure was a good time and memorable. I was a bit of a journey-pro, and I use that term in the sense that it was more about the journey with me. The days I spent training and travelling with Tim are some of the best memories of my life. I remember trips and training days, but the races not so much.

Most every significant relationship in my adult life has come from my trips – I met my wife in Sado, Japan at the ’98 Long Course Worlds; her parents live right on the Hawaiian Ironman race course; Tim met Nicole during a trip of ours to Cancun; one of my most dearest friends was my translator in Japan and is now an investor in EC; my older brother Todd’s wife mixed in the same training gang as Tim and I in Boulder, and the list goes on.

The only race memories I’m truly fond of weren’t even mine. Tim’s first win in Kona was truly my favorite moment in sport – winning after 9/11, winning after going 3rd, then 2nd. Not many people back up the hype or answer when the time just needs to be right. Tim did all that – truly a heroic day.

Triathlete: Since retiring you have been commissioned as the West Point Triathlon Team Coach. What has that experience been like coaching at your Alma Mater?

TD: From a coaching standpoint, I couldn’t ask for better people to work with. These kids are extremely talented, highly motivated to learn, and wicked smart. I couldn’t ask for more than that. They also have a strong support structure – from the officers teaching at West Point (many are very competitive triathletes themselves) to the parents who attend most of our races.

The hardest thing for me has been to get so close to some of these kids and then watch them graduate and move on to being professional soldiers. In the four years I have with each of them, I really try to inspire in them the lifestyle as much as actually coach them. I’ve also got kids that I coached that are in harms way or headed there soon. The parent in me worries about each and every one of them and I try to keep in touch with as many of them as possible.

Triathlete: Do you remember where and when the idea came about for Endurance Conspiracy?

TD: Well, I’ve always carried a pad with me on trips for doodling and writing – I just did it for myself, not for any real reason behind it. In 2007 I helped set up the Red Bull House on Kona. We had some parties and events throughout the race week where we had some other companies involved – Inside Tri, Patagonia, Loop’d and DeBoom Coaching. Everyone wanted tees made for the event, so I just sort of took control of that project and I guess that’s where it started. EC was born there. I learned that I just really enjoyed the whole creative process and was filling a void that I didn’t know existed in my life – I had found a new inspiring outlet.

Triathlete: Why is EC not just another tee shirt company?

TD: Well, for starters, we’ve got two multi-ironman world champs as partners – Tim and Pete Reid. Both guys play an active role in the day-to-day activities of the company. Anytime guys like that get involved with a business, people’s ears will perk up.

More so, I think Endurance Conspiracy represents a simpler time in adventure sports. I think there was a sense of enlightenment in the earlier years of triathlon that is missing now. The pros used to travel to races early and stay late – they’d really soak up the experiences and make new friends, try local cuisine, enjoy the resident adventures and nightlife… Nowadays, pros zip in and out of a race venue so quickly they really don’t get anything out of it except the chance to watch a whole season of the Office on their computer. We’re trying to reconnect with the adventurous spirit of endurance sports and the reason we all originally got involved with it.

Besides that, we’re just trying to spread a message about our lifestyle to the masses. Health and fitness have given us so much and we believe they are a gateway to limitless adventure and joy in life. Our credo says it all “the fit shall inherit the earth.” Those perfect moments that we all feel when we’re cresting a steep hill on our bike, or skipping down a trail or catching that wave for a free ride into the beach – unless you experience those moment’s for yourself, you really don’t know the euphoric high we’re expressing in our art. I guess you could say that’s the conspiracy.

As for going the organic route, we decided that the only way we would move forward with this project was if we could do it right. You’re either part of the problem or you are part of the solution. DeBoom Coaching has worked with Patagonia the past few years and they were very helpful in linking us up with top-notch environmentally friendly manufacturers for our endeavor. Honestly, if people like us who maximize our time in the outdoors don’t take the right steps, how do we ever expect the masses to care?

Triathlete: Looking at the EC line, you touch on many different sports including cycling and surfing with your designs.

TD: We go where the lifestyle takes us. Our experiences have taken us far beyond the borders of triathlon and EC reflects that. Pete’s a bush pilot now, and probably spends more time skiing that cycling; I spent the first two years of my retirement doing multi-pitch climbs all around the Rockies and spend more time playing my guitars than training; and who knows what Tim has up his sleeve. Bottom line is we all love the adventurous and active lifestyle – triathlon just seems to be where we channeled our energy for a time.

Triathlete: Let’s talk briefly about my personal favorite in your line, the tee titled “Clyde”. What was the artist’s inspiration behind this shirt?

TD: Clyde is definitely one of our most popular shirts. It was honestly a very rough idea that wasn’t meant to go anywhere. Tim took a look at it and insisted that it be put in the first run of shirts. I thought he was kidding, but sometimes the simplest ideas are the best. We named it Clyde in reference to the Clydesdale division – it’s definitely not meant as a slight, but more of an acknowledgment for a group that doesn’t typically get recognized.

Triathlete: You recently attended your first expo at the Pasadena Marathon. How was EC received amongst the running crowd?

TD: It actually went very well. Any chance we have to spread the word about EC is good for us. And, the LA area is an easy trip since we have family in Hollywood – we’ve spent so much time in that area the past couple years, that we almost feel like locals. I’m sure we’ll learn a lot from every event we attend this year – we’ll probably announce a list of events on our schedule in the upcoming weeks.

Triathlete: You mentioned earlier your partnerships with companies like Coffees of Hawaii and Retul. Do you have plans to design shirts for race organizers too?

TD: We get asked quite often to do custom art for companies, races and more. We have done it in the past and I guess we wouldn’t refrain from doing it in the future. We’re in the process of building the EC Brand, so we would consider working with other companies that share the same ideals as we do. I’ve also done work for friends – it’s hard for me to say no to my friends.

Triathlete: In looking through your tee shirt line, it appears you traveled the world during your days as an athlete and have drawn inspiration from these trips. Do you have a favorite place you visited as an athlete that gives you added inspiration? Or maybe a place you haven’t been but will someday go?

TD: Honestly, I feel that I’ve travelled just about everywhere – except Alaska – I still would love to spent a chunk of time there. I’ve always been very comfortable living out of a duffle and Tim will tell you that I can sleep anywhere that I lay my head. That said, I’m a homebody – I love being home. When I’m on the road, I crave the routine of my life back home. Especially these days, with 3 daughters and Elize waiting for me; there’s no where more special or inspiring than with them.

Like a lot of people I suppose, I find inspiration when I’m alone on the trails – away from the hustle and bustle of society. The ideas come so fast at those times that I have gone for runs with a small note pad and pen just so I don’t forget them. I’ve literally stopped in the middle of a run just to scribble out an idea for a design.

Triathlete: Have your first customers been people who know of you, Tim and Peter and what each of you achieved as athletes or are people buying these shirts because of their cool factor?

TD: I’m not sure on this one. Orders have been pretty steady so it’s hard to keep up always with the names. But, I can say that every once in a while I’ll recognize a name from my past. I try to add a little note with their order when the package goes out.

For more information on Endurance Conspiracy, go to: Enduranceconspiracy.com