With lots of bodies at the underpants run this year, we look at a few that stood out from the crowd. See the photos from the event here

Admit it, when you’ve done a season’s worth of Ironman training, you’re proud of your body. Sure, it’s “all about the race,” but sometimes there’s a little bit of vanity mixed in there, too. Nowhere else in the world is that blend of high athleticism and pride more on display than at the famous underpants run held two days before the start of the Hawaii Ironman World Championships.

Though there’s no shortage of sculpted bodies in the hundreds that show up to show off, we saw a few costumes that stand out above the rest:

Dick Hoyt of Holland, Mass. and friend, wearing Team Hoyt underwear and a stuffed bra that reads, “My Breast Friend” next to a picture of his son Rick.

Though he needs no introduction, Dick Hoyt is the man behind Team Hoyt. The father of Rick Hoyt, Dick has raced over 1,000 events while pulling, pushing, or otherwise bringing his son who was diagnosed with cerebral palsy at birth.

“Our message is, ‘Yes you can!’” said the elder Hoyt. Though he won’t be racing with his son this year, Rick will attempt to complete the course on Saturday with the help of guide/teammate Bryan Lyons.

Of the costume choice? “Some of the girls on Team Hoyt wanted to make some bras,” Hoyt said, with a thick Massachusetts accent. “So I thought…why not?” 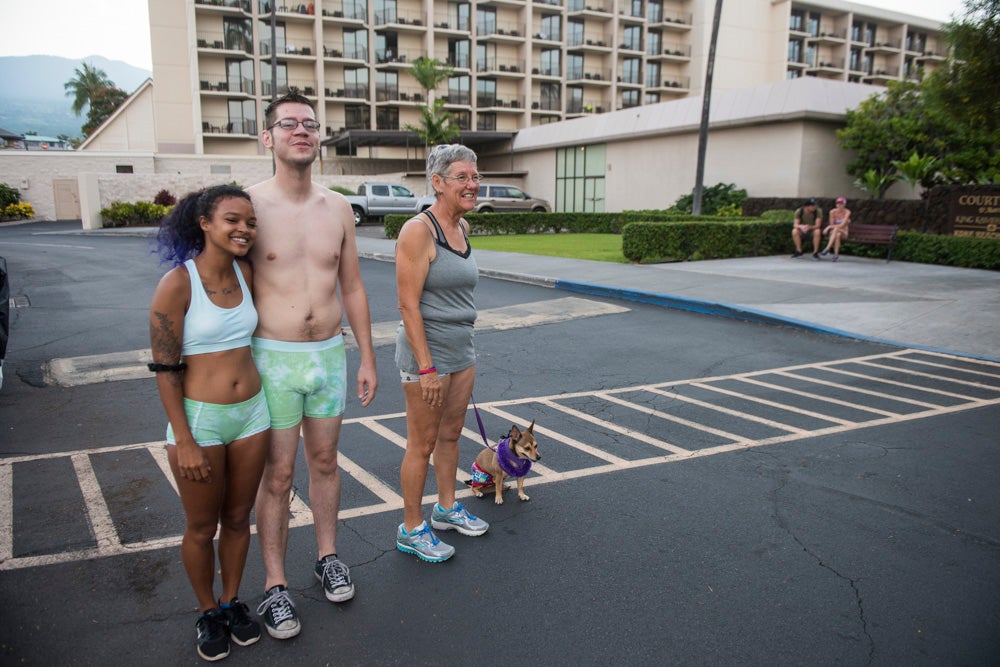 Becca and Alex (and Ajax) from the Big Island sporting their best green tie-dye couples outfit.

Though neither of them are racing, locals Becca and Alex still show up for the fun surrounding race week. As fun as their matching tie-dyed shorts are, things almost went in a different direction. “We were going to do gold,” Becca said, “but the only option in gold was a one-piece shiny wrestlers costume for Alex.”

Their furry companion, Ajax, is also clad in his finest underwear. But he’s not just in Kona for fun: His job during race week is that of a rescue boat captain.

Though she wasn’t the only Wonder Woman at the underpants run, this veterinarian, coach, and multiple-time Kona finisher certainly was the most committed. “I’ve worn this costume before, but this year, we sort of had to rebuild.” Ford said her latest iteration set her back about $100. 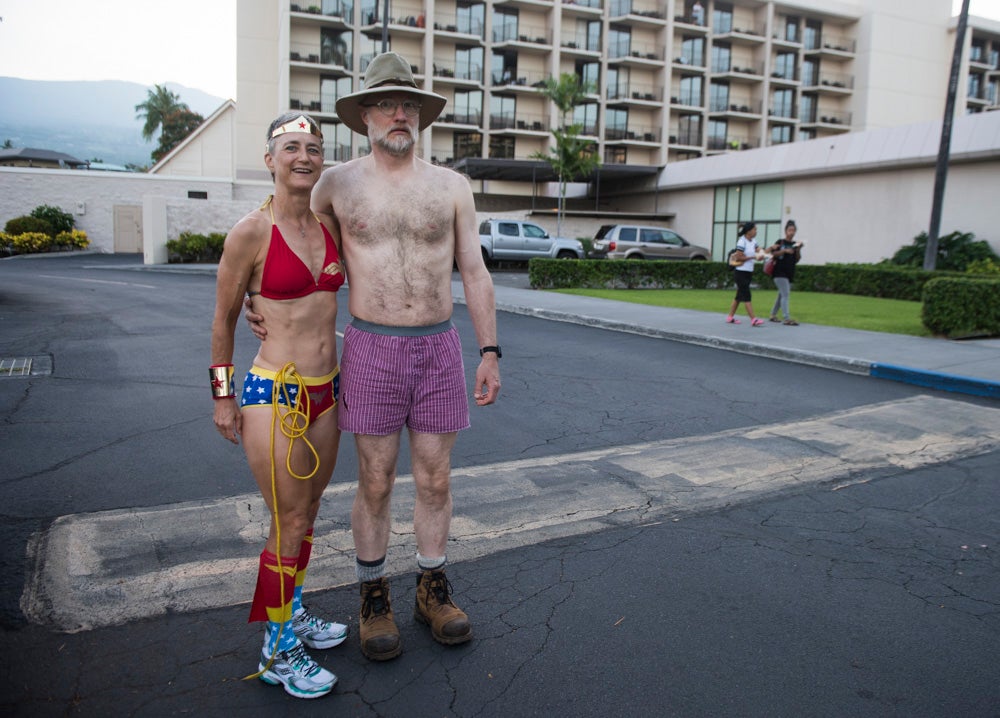 While Ford’s excitement and enthusiasm would have made the original Amazonian proud, her husband’s more sober costume (and demeanor) provided the perfect ying to her yang.

Chrissie Wellington to be Inducted into Ironman Hall of Fame

Dreaming of a Race-Cation? Here Are 4 of Our Favorites