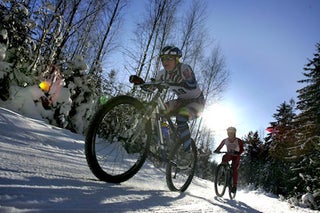 The opening race of the 2012 Winter Triathlon series takes place in Lygna, Norway this weekend.

Winter triathlon is a multi-discipline winter sport composed of running, mountain biking and cross country skiing – all on snow. Course distances are set on the day to achieve a winning time of around 90 minutes to two hours, after taking into account the geography and the snow conditions.

Lygna has a strong winter triathlon pedigree – it hosted the 2010 European Championships and a European Cup last year.

At 800m above sea level, the ski resort always provides plenty of snow but there is also equipment for producing snow if necessary.

Kåre J. Grøtta from the LOC, BrandBu IF SKI said: “Today the conditions are excellent and last Sunday more than 2000 young athletes participated in a cross country event here.”

This year’s European Cup start lists are once again dominated by the Norwegians who will also be competing in their National Championships at the same time. Last year’s champions Hanne Trønnes and Kristian Monsen are back again to defend their titles

Former world champion Andreas Svanebo (SWE) won the European Cup last year and he will be a dangerous competitor once again in the men’s elite race.

Russian athletes Tatiana Charochkina and Yulia Surikova will also expect to be nearer the top end of the results list.