Rebeccah and Laurel Wassner are featured in the May 10th Anniversary issue of O, The Oprah Magazine as ‘Women on the Rise.’ The professional triathlete twins from New York open a fashion spread that features portraits of 10 women who are making a difference in various careers. Christian Witkin photographed the twins, not in their customary racesuits, but in stylish dresses from cutting edge designers. 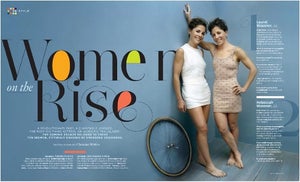 Laurel is highlighted as the first cancer survivor to compete professionally as a triathlete, alongside being named 2008 Pro Rookie of the Year by USA Triathlon. Rebeccah is distinguished as a decorated triathlete with 17 victories to her credit and the motivating catalyst behind her twin sister’s racing career.

This past Sunday, just days after O hit the newsstands, Laurel won the Miami South Beach Triathlon, her second win of 2010. The twins are also profiled in the May/June issue of Inside Triathlon magazine.

What Happens if I Lose My Timing Chip? (And Other Triathlon Timing Mishaps)

Triathlete Hour Podcast: Nicola Spirig Looks Back on 30 Years at the Top of the Tri Game