Tyr Sport is increasing its stable of athletes with the addition of Tom Lowe. With the likes of Andy Potts and Chrissie Wellington on the roster, Lowe will have inspiring teammates to motivate him. 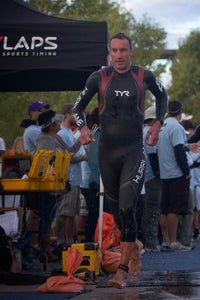 Huntington Beach, CA- TYR Sport Inc. is excited to announce a sponsorship agreement with top British triathlete Tom Lowe. TYR will be the exclusive apparel sponsor for Lowe for all three triathlon disciplines. Lowe is coming off a tremendous conclusion to the 2010 season, where he placed third overall at Ironman Arizona. Even though Arizona was Lowe’s first full Ironman, he managed the fastest run split (2:48:11) of the day for the men and emerged as one to watch in 2011.

“I’m very excited to be joining the TYR family as a sponsored athlete, giving me the opportunity to wear what I believe is the premier triathlon wetsuit, race suit, and clothing on the market,” said Lowe. “Hand in hand with this, TYR’s dedication to continual improvement and innovation of it’s products, and it’s support of, and close work with, it’s athletes, I’m sure will allow me to achieve my race goals and continued development within triathlon. I truly believe that wearing TYR will make me a faster, more complete athlete.”

During his enforced break from competition, Lowe coached and trained elite athletes in triathlon, duathlon, and running. Lowe is a fully qualified UK Athletics Level 2 Endurance Coach as well as a REP’s Level 3 Certified Personal Trainer.

“Tom’s desire to compete at the highest level exemplifies the spirit and ideals of the TYR brand. We are excited to bring Tom into the TYR family and look forward to a great 2011 race season,” said Ryan Dolan, Vice President of Sales.

TYR engineers technical apparel and equipment for swimmers and triathletes. Named for “TYR”, the Norse god of warriors, we’re a company started by athletes and populated by athletes. The cultures and communities of competitive swimming and triathlon pervade our offices. We are dedicated to re-imagining technologies that help athletes attain peak performance. Like athletes, we work with an intense spirit of competition. We aim to create the fastest, most advanced technologies and products. Always.