In this Tweet of the Day, Mirinda Carfrae’s boyfriend Tim O’Donnell gives her a hard time for the small stature of her Felt DA triathlon bike with 650cm wheels.

@TOinTRI: Hey, who the heck is leaning that kiddie bike on my @Argon18bike speed machine?! 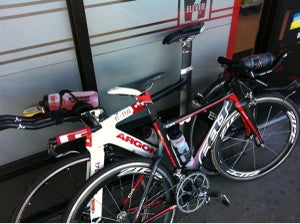 O’Donnell is not the first of Carfrae’s peers to poke fun at the small bike. Carfrae and friendly rival Julie Dibens exchanged the following tweets earlier this week:

@MirindaCarfrae: Pic = who thinks she should ride this bike in Hawaii this year? I just might be able to keep up! 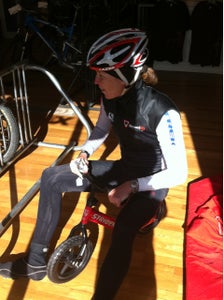 @JulieDibens: Well its about the same size as your bike, so i figured i would give it a try

Carfrae switched to the 650cm wheels and a smaller Cannondale Slice frame before last year’s Ironman World Championship race (she has since changed sponsors and will ride the Felt DA in 2011). Although O’Donnell and Dibens are having fun at the expense of Carfrae and her bike, we think it’s safe to say Carfrae has the last laugh. After all, she did win an Ironman World Championship aboard a “kiddie” bike.