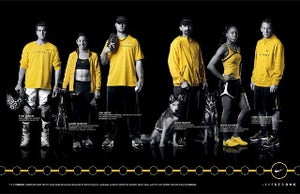 She will be featured alongside seven-time Tour de France winner Lance Armstrong, World Champion runner Sanya Richards, major leaguer Jon Lester and other elite athletes who have been personally impacted by cancer.

Wassner, the 2008 USA Pro Triathlon Rookie of the Year, has gained recognition as the first cancer survivor to earn status as a professional triathlete. In 2009, she placed fourth in the Toyota Cup Lifetime Fitness Race Series and earned 6 top-five finishes in professional races. She and her twin sister, pro triathlete Rebeccah Wassner, race for the Ulman Cancer Fund’s Team Fight, which raises money to provide support and resources to young adults affected by cancer.

“Having fought and survived Hodgkins Disease, I am dedicated to increasing awareness and hope for other young adults and their families whose lives are affected by cancer,” says Wassner. “And knowing that since 2004, Nike has helped the Lance Armstrong Foundation raise over $80,000,000 to fight cancer makes me even more excited to be part of this campaign.”

The ads will run in December and January issues of ESPN, SELF, Shape, Glamour, Lucky, Teen Vogue alongside select online mediums across the prevalent holiday shopping window.

Earlier this year, the Wassner twins were featured in a LIVESTRONG television commercial, prominently featured on ESPN and Versus during the Tour de France. The twins won a combined 17 triathlon races in 2008 and 2009.

At LIVESTRONG, we fight for the 28 million people around the world living with cancer today. There can be – and should be – life after cancer for more people. That’s why we kick in at the moment of diagnosis, giving people the resources and support they need to fight cancer head-on. We find innovative ways to raise awareness, fund research and end the stigma about cancer that many survivors face. We connect people and communities to drive social change, and we call for state, national and world leaders to help fight this disease. Anyone anywhere can join our fight against cancer. Join us at www.LIVESTRONG.org.

About the Ulman Fund

The Ulman Cancer Fund for Young Adults is a leading voice in the young adult cancer movement, working at a grassroots level to support, educate, connect and empower young adult cancer survivors. They aim enhance lives by supporting, educating and connecting young adults, and their loved ones, affected by cancer. www.ulmanfund.org.

About The Wassner Twins

Laurel and Rebeccah Wassner are professional triathletes who live in New York. After surviving Hodgkin’s Lymphoma at age 23, Laurel was inspired by her twin sister, Rebeccah who had begun her pro career in 2004. Rebeccah’s determination and success motivated Laurel to get well and get strong. Today, the Wassner Twins train and race together, and while they race to win, they also compete to raise awareness for other young adults affected by cancer. View their LIVESTRONG video here.

Recalled: Past Champions On The New York City Triathlon