Driving a car isn’t typically considered a physically or mentally stressful activity, but most of us never top 200 mph. Although most people’s morning commute has very little in common with Sunday’s Indy 500, the same motivation that drives IndyCar stars Tony Kanaan and Vitor Meira on the racetrack motivates them in triathlon.

“For me and Tony, it’s about the competition with yourself—to challenge yourself if you can and believe in yourself once you finish,” said Meira to Indycar.com.

The pair raced the Ironman World Championship 70.3 last fall, and this year they are jumping to the full distance. They were both invited by the WTC, owners of Ironman, to race in Kona this fall.

Just as Ironman Hawaii is the biggest event in our sport, the Indy 500 is the biggest race in the Izod IndyCar Series, and it’s coming up this Sunday. Both Kanaan and Meira will be on the start line.

Last year, Kanaan was fit to his custom painted Trek Speed Concept 9 Series by Retul’s bike fitter Todd Carver on the show floor at Interbike. His bike is equipped with Shimano Dura-Ace Di2, an SRM power meter, re-badged race wheels that appear to be Bontrager Aeolus 6.0’s as well as an ISM Adamo saddle.

Check out this gallery of Kanaan’s fit. 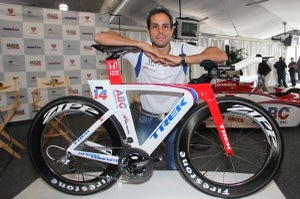