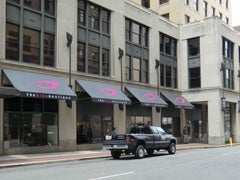 The store opened its doors on Friday, June 25 with a grand opening party, which included visitors such as the Governer of Delaware, Jack Markell, and the Mayor of Wilmington, James Baker.

The store has been labeled a lifestyle store aimed at making bike commuting in Wilmington as convenient as possible. The commuter-friendly service has been named “bikeLodging” and allows cyclists to commute to a spa-like environment in the city center. Amenities include shower facilities and breakfast.

To learn more about the new store and the bikelodging service click here.