St. Anthony’s race officials have permanently moved the open-water swim portion of the race to an area of Tampa Bay north of North Shore Pool in St. Petersburg.

See the complete press release and a course map below:

The swim course will be 1.5K or .93 miles. The bike and run portions of the race and the transition areas will remain the same, at 40K and 10K, respectively. The St. Anthony’s Triathlon, one of the best known triathlons in the United States, is part of the World Triathlon Corporation (WTC) 5150 Triathlon Series. 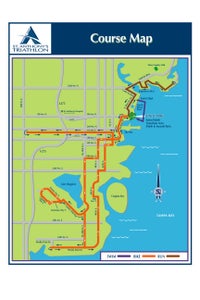 During last year’s triathlon, the swim course was relocated away from the St. Petersburg Pier and shortened to 1,000 meters due to weather conditions. “Numerous competitors told us how much they liked the swim course last year, so we decided to make the permanent move to the new location,” said St. Anthony’s Hospital President Bill Ulbricht. “We think the change is necessary because of potential construction at the Pier and that this new course will continue to offer athletes an excellent challenge as they build to the other two legs of the race.”

The St. Anthony’s Triathlon will be held on April 29, 2012. Learn more at Satriathlon.com.