What finding the perfect sports bra can do for you.

Being a 34A can have its advantages, at least from an athletic standpoint.  No bouncing, jiggling, unbalancing unpleasantness to deal with on those long runs, no awkward stares from men out walking their dogs.  But where does that leave the, shall we say, more endowed women athletes?

Just how are our breasts- small and large alike- affected by the way we exercise?  And more importantly, how do we prevent the discomfort that comes along with exercise?

(See below of a gallery of some of the latest in women’s sports bras and tops!)

Why Wear a Sports Bra?

An anatomy lesson: breasts are essentially just fatty tissue that is held in place by ligaments that go from the skin through fat to muscles underneath the breast – the pecs, if you will.  Interestingly enough, humans are the only animals who permanently have breasts, since most animals only develop them in order to breast-feed. 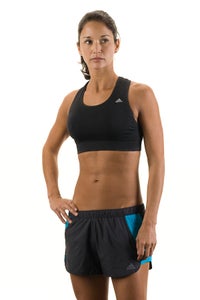 If a woman has large breasts and loses weight through exercise, the fat in the breast tissue may be lost as well, which can lead to the appearance of sagging.   Breast tissue on average weighs between 200 and 300 grams, that’s a lot of weight to be bouncing during exercise, and according to studies, this bouncing increases chances of premature sagging because of the stretching of the ligaments, thanks to exercise.  The damage, unfortunately, is irreversible.

However, help can come in the form of fabric and elastic- the proper support can be a great place to start!  According to Dr. Joanna Scurr, “Breast size and pain caused by exercise can be a real barrier to women doing exercise. There really are women who want to do exercise but who don’t have the bras to cope.”

LaJean Lawson, a sports bra expert, adds, in order to get women to exercise, “The bottom-line point has always been the same:  Engineer better bras that enable women of every size to exercise longer and more comfortably, thus maximizing the incredible benefits of exercise.”

To avoid sagging no matter what your bra size, experts agree that a bra is a must.  “Sagging won’t cause medical issues for your breasts, but if you are concerned about keeping the ‘perkiness factor’ going as long as possible, wearing a supportive sports bra is probably a good strategy,” Lawson adds.

Available in a wide variety of shapes, sizes and materials(what does encapsulated mean anyway?) the sports bra is one of the most important pieces of equipment you need.  So how does one pick a sports bra?

Bruce Mason of the Australian Institute of Sport has a few ideas about that: “Many women wore old-fashioned bras during sport which provided very little support.   The size of a woman’s breast change considerably during life and they need assistance in the shop to measure their correct bust size and get a sports bra that is the right size and shape cup for them.   Different sporting activities require different degrees of breast support and a woman needs the right level of support for the activity in which she is involved.”

Before we select a bra, we need to clarify our definitions.  There are two types of sports bras on the market today: the compression bra and the encapsulation bra. Those blessed with smaller breasts tend to prefer compression bras, since they simply hold breasts in place by pushing against the chest.  However, those more well-endowed may prefer the encapsulated styles, as each breast is separately contained (as with a standard bra) and the design is more “heavy duty.”  Recent studies have shown that the encapsulation bra is the best choice for preventing movement and discomfort. 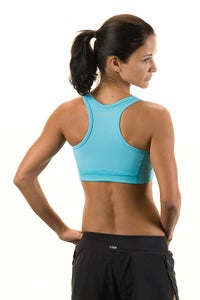 The biggest problem women run into when searching for a sports bra is a mental stumbling block.  According to Wendy Hedger, one of the researchers with Scurr, “There’s a social stigma about certain sizes; many women don’t want to be seen as too small or too big and buy a bra that doesn’t fit well in order to be what they consider to be a normal size.  Many other women are unaware that they are wearing a badly fitting bra or unknowingly wear the wrong bra size because they are routinely being sold ill-fitting bras.”  She adds that women shy away from encapsulation bras because they don’t fit the image of what a sports bra should look like.

Material is important as well.  Most women don’t think about the fabric, but it’s an important factor.  According to Lawson, “The best fabric blends are synthetics (nylon, polyester) with specially engineered fibers that move moisture away from the body, dry quickly, and discourage bacterial growth.”

Before you wonder why there’s no list of recommended sports bras in this article, consider this: a thorough study conducted at Oregon State University by Lawson suggested that no single bra was pronounced a winner.  So, there’s only one way to find the best sports bra for you: try, try and try.

The Quest for the Perfect Bra

Lawson offers a few key suggestions: “For a super athletic 34A, support needs are minimal, but comfort and body-friendliness is everything. For a less athletic 38DD, support and adjustability become very important for comfortable exercise.”

The American Council of Exercise also has key tenants for bra selection.  Rule number one is to disregard sizing.  Rule number two: “Choose a bra that has good ventilation so sweat won’t be trapped, which increases friction and chaffing.”  Naturally, a good bra is comfortable right away, not after being “worn in.”

Perhaps the most helpful tip: do a jump test.  The Council suggests that “When trying on a bra, jump around and try to mimic as best you can the activity you’ll be doing while wearing the bra.”

Finding the perfect sports bra takes serious time and energy- it’s a workout in and of itself!