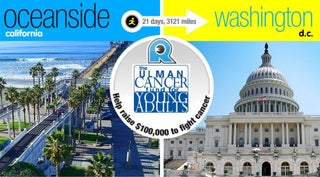 Revolution3 triathlon has announced a plan to “Run Across America”. On Monday, March 26 the Rev3 staff will begin an epic journey across America. Ten people, 21 days, 3121 miles, one goal: to raise $100,000 for the Ulman Cancer Fund.

A team of Rev3 staff members will traverse the countryside, on foot. Along the way, they will be joined by members of the Rev3 race team as well as inspirational runners whose lives have been in some way, shape or form, been affected by cancer. The group will start in Oceanside, Calif. and finish in Washington, D.C.

If you’re interested in supporting the team, there are several ways to get involved. The first is by giving. A pledge system will be set up online via both Rev3 triathlon and Ulman Cancer Fund.  Another way to get involved is to be a relief runner. You can track the team’s progress online, meet them across America and log some long miles for a few days.